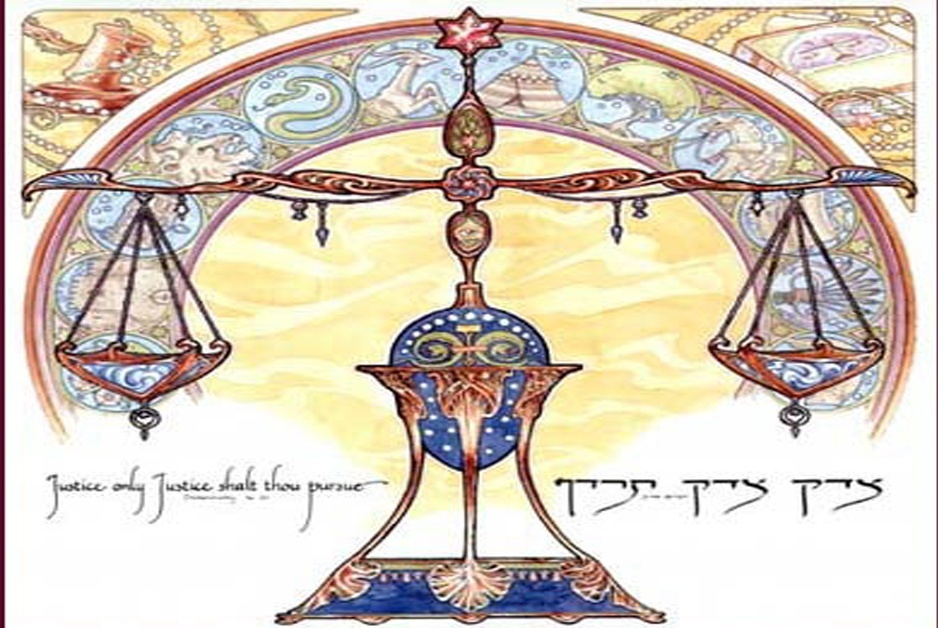 On the wall at my house, hangs a piece of Jewish art I bought more years ago than I can remember. I found it back in the halcyon days when I was a religious conservative Jew jetting around Fresno on rollerblades, tzitzit flapping in the wind. The artwork shows a verse from the Torah—specifically, Deuteronomy 16:20—in both English, and Hebrew, along with art depicting a pair of scales. Online, the piece is frequently referred to as “The Lawyer’s Creed.” Ironically, I don’t think I knew that until I started writing this post, and went looking for a jpg version to show you.

My days of religious observance of any sort are long gone, having ended well before I went to law school, though the remnants remain scattered throughout my house, and my life.

Though no longer religious, I still feel my life centers around striving for “justice”–perhaps because, as Rabbi Bradley Artson writes, it is the center of, the driving engine of, Judaism. And, as anti-semites are wont to remind me, I may have removed myself from Judaism, but perhaps Judaism, or at least the teachings with which I was ingrained when younger, cannot be removed from me.

I’m not certain, though—although I do have a definition that I’m trying to make work, and will mention below—that I know exactly what “justice” means anymore. Perhaps that is why I often feel that I frequently fall short of bringing any of it into the world.

A post on the Internet immediately made me think of the verse:

Justice, Only Justice, Shalt Thou Pursue.

In his post, Scott Greenfield—not for the first time; probably not for the last—bemoans the preoccupation some who labor in the criminal legal systems of our country have with the idea that they are to “do justice.”

You want to do justice, whatever that means? Be a prosecutor. That’s their job. And the system always needs good, honest, smart prosecutors to do justice.

And in the strict sense of whether the direct aim of what we do is focused on the idea of “doing justice,” this is clearly correct. As Scott notes, criminal defense attorneys, in particular, “don’t do justice.”

We zealously defend the accused. We use whatever tools the law allows to do so.

Like a lot of states, New York has an “oath” that people “make” when transitioning from being non-lawyer to lawyer.

Scott and I both took nearly the same oath. Here’s California’s.

I solemnly swear (or affirm) that I will support the Constitution of the United States and the Constitution of the State of California, and that I will faithfully discharge the duties of an attorney and counselor at law to the best of my knowledge and ability. As an officer of the court, I will strive to conduct myself at all times with dignity, courtesy, and integrity.

The additional words in California’s oath are a recent change to accommodate the latest fad—everyone is supposed to be nice now—neither mentions “justice” even once. Nor, to my knowledge, do any of the relevant statutes that define the duties of criminal defense lawyers, whereas, as Scott’s comment alludes, and as I’ve mentioned in at least one blog post before, they do ascribe that duty to prosecutors. So in that sense, it is true—trivially so—that it is not the job of criminal defense attorneys to do justice. [1]On the other hand, Texas is a state that includes “justice” in the oath lawyers take, but I have no idea how they intend it. They talk about “administering” justice. Could just mean that they’re promising to uphold the death penalty. But I suppose it’s not nice of me to say that.

Like Scott, although perhaps in a slightly snarkier, more cynical way, I don’t see the legal framework in which I labor as having anything to do with “justice.” In fact, to use a term that I’ve recently been thinking about quite a bit, I suspect that any attempt to use the word “justice” in a sentence that relates to our legal system would simply create a deepity.

On the other hand, that the so-called “criminal justice system” would have nothing to do with justice has always bothered me (maybe that’s why I’m snarkier, and more cynical, about it). I’ve mentioned more than once that I have a strong belief in “repairing the world,” and justice seems intricately connected with that. As I most-recently stated,

[M]y definition of “justice,” … would be “that which works to repair the world, after it has suffered an injury[.]”

But what does that mean? And how does one do that? Because “that which works to repair the world, after it has suffered an injury” is, on its face, not much clearer than using the word “justice.” It needs explication.

The answer surprisingly simple. I do my job. The one I signed on for. The one that says that I’m to “zealously advocate” for my clients, notwithstanding the fact—or maybe especially attentive to the fact—that some of them may be “criminals.” [2]Note that:  “Although California does not follow the ABA Model Rules and California’s Rules of Professional Conduct do not expressly include a ‘zealous advocacy’ requirement, it is commonly understood that lawyers in this state have a similar obligation to zealously advocate on behalf of their clients.”

My job. The one the law I agreed to support when I took that job actually spells out, in California Business & Professions Code section 6000 et seq., my job duties.

Certainly I don’t do my job in a way that deliberately brings about injustice. But I recognize that my job has very specific parameters. When I took the job, it was those things that I agreed to do. Just as a beer salesman takes on his job, not with the aim of doing justice, or of not doing justice, but with the aim of selling beer, so I realize that I took on my job with very real—and equally achievable—goals. “Achieving justice” isn’t in the job description, but “zealously advocating for clients” is.

And just as the beer salesman—or the knife salesman, or gun salesman, for that matter—is not responsible for the fact that some people will buy his wares, then go out, and make the world a worse place, so am I not responsible for people possibly doing the same when I do what I’m supposed to do. My job is just to fight for their right to a fair trial, a disposition of their case that comports with due process of law, forcing the prosecution to prove the case against them if it can. If after a fair trial, the prosecution can prove its case, my client will be justifiably punished. But if, after a fair trial, the prosecution cannot prove its case, my client should go home.

In the end, isn’t that justice?

To the extent that it’s true that criminal defense lawyers don’t do justice, I have no idea what that really means outside the scope of what I wrote above. Considered in light of what I wrote above, it is a trivial statement. It is no more significant than the statement that dry cleaners don’t do justice. Duh! They do dry-cleaning! To the extent that it is some kind of profound statement about what criminal defense do not do I can only muster a “yeah, so?”

But the idea that criminal defense lawyers do justice is—I now see—clearly a deepity. To the extent that it is true, it just means that we work within a particular legal framework that has, as part of its name, “justice,” and everyone who works within it “does justice.” That would include me, prosecutors, judges, probation officers, jailers, police officers, possibly even bail bonds company employees. But to the extent that it is supposedly some great and profound truth: that criminal defense attorneys work towards Justice-with-a-capital-J, it is nothing more than a platitude. Pretty much vapid.

If I’m going to spend all my time worrying about whether or not what I do meets the requirements of a deepity, you might want to consider hiring a different attorney.

Which is why I’ve decided that the question of whether, or not, I “do justice,” or “fight for justice,” or am a “champion for justice” doesn’t deserve my attention. I might as well spend my days pondering how many angels can dance on the point of a pin.

Not only is that not how I want to spend my days, if you hire me as your attorney, I don’t think it’s how you want me to be spending my days.