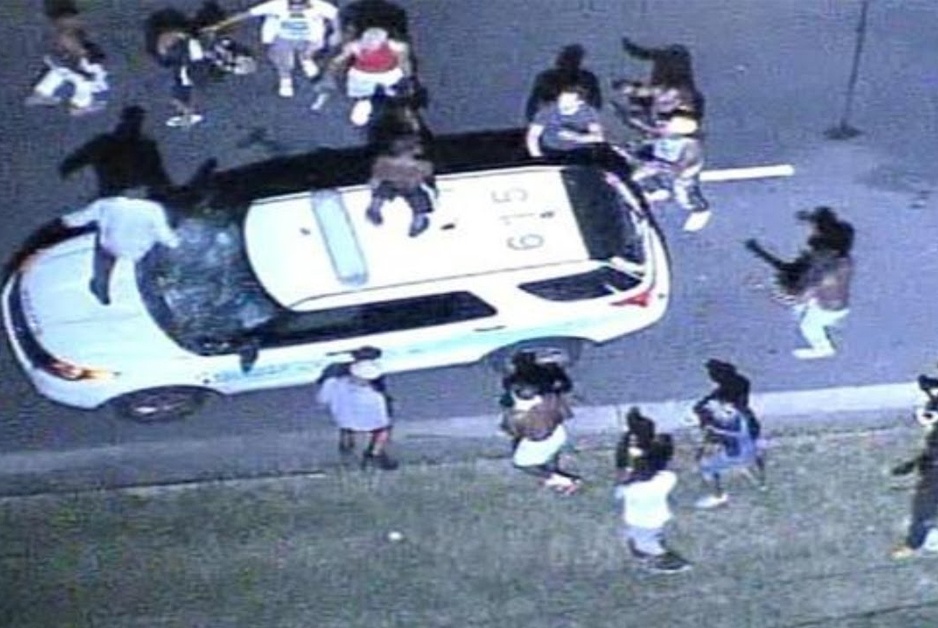 A Culture of Lies

This may seem—especially to anyone who knows my views, and read the headline—like it’s going to be a post about cops.

I suppose, mostly, it is. But it’s really a post about all of us. It’s a post about the fact that, as things stand right now, there is very little to give hope for a unified future for America, where people may disagree on certain things—even fundamental things—but are able to continue to respect one another, be truthful about what is happening, and work toward a better world.

The other day, another black man was shot, and killed, by police. It’s the Neverending Story of Black Life in America.

The unrest began at the scene of Tuesday’s deadly shooting of Keith Lamont Scott, and quickly escalated, turning violent. Police needed to call in additional help just after midnight, as the crowds swelled.

People are angry and looking for details over Scott’s deadly shooting, but police and Scott’s family are telling two very different stories of what led to the shooting, reports CBS News correspondent David Begnaud.

The story is—or I should say the stories are—complicated in that the police are saying there was a gun, and they recovered it, while the family says there was no gun, and that he was reading a book.

Now, it’s not unusual for cops to mistake things like books, phones, garden hose sprayers, for guns. Anyone who has ever paid a modicum of attention to the news of police shootings knows this. If you don’t, google it. One reason I don’t write as many posts as some others is I spend too much time hunting down stories to link to my posts. In the interest of writing more often, I’m cutting back on that. If I can learn to use the Google, you can, too.

Anyway, it’s also not at all unusual for cops to lie. Most—if not all—do it when there is a benefit to doing it. As I noted in the post prior to this one, you don’t have to take my word for it. As I said, consider this former San Francisco Police Commissioner if you don’t want to trust me:

Police officer perjury in court to justify illegal dope searches is commonplace. One of the dirty little not-so-secret secrets of the criminal justice system is undercover narcotics officers intentionally lying under oath. It is a perversion of the American justice system that strikes directly at the rule of law. Yet it is the routine way of doing business in courtrooms everywhere in America.

And if you think that they only tell lies to justify dope searches, then I don’t even know what to say to you; there’s something wrong with your brain.

Yet, in that sense, they’re like almost any other American these days. Social Justice Warriors, who often just go by their initials these days—SJW—are absolutely not immune from lying to advance their narrative.

And rape allegations? Don’t get me started. If I had a dollar for every time I’ve heard that I had to believe a “survivor” who later recanted, or was clearly shown to be lying, I might consider getting a new car.

Even our presidential candidates are in on it. Donald Trump lies pretty much every time he gives a speech. For years—at least five, from what I recall—he said that Obama was not born in the United States. When he finally decided the time had come to admit it so he could get a few more votes, he lied that “Hillary Clinton started it.” [1]The Google is your friend.

Now, there is a difference between making a mistake, or even engaging in hyperbole, and telling a lie.

People make mistakes all the time. God knows I do. Although if all these police shootings are mistakes, well…something is mightily wrong, and we need to do a better job of hiring police officers who won’t kill people so often by accident.

And hyperbole has no real place in discussing whether the killing of a human being of any color by a human being wearing any color—blue, or not—was a necessary event. I’m not talking about the kind of hyperbole I used above when saying that I could buy a new car if I had a dollar for every false rape allegation—although, to be frank, I’m not even sure that’s hyperbole anymore. Although referring to rape victims as “survivors,” unless there was an attempted murder in the course of the rape, is certainly hyperbole.

No, I’m talking about the kind of hyperbole that exaggerates a man’s refusal to comply with every conflicting order given by a police officer into a threat that results in a bullet in the back of someone whose empty hands are in the air for all the world to see.

That kind of hyperbole is not even rightly called hyperbole, frankly. It’s just another flat-out self-justifying lie by the guys, or gals, who lived to help write the history of the event.

And even when it involves clowns, it’s just not funny.

The ties that bind societies together are built from trust, which requires honesty, truthfulness. We might not always be able to handle the truth.

But we need to have the truth.

Having the truth is not just important for the trust that being able to expect it, that knowing it will be forthcoming even when it’s hurtful, brings. The truth matters because it allows us to formulate real, workable, deliberate proposals for dealing with problems.

And if there is, then why haven’t the police released it yet, since they want to “change the narrative”?

Frankly, there’s something that sounds a little hinky here. I mean, seriously, they killed a man because he allegedly “makes some imminent threat to them, and, uhm….” What exactly was the threat? Have they not had time to come up with that part of the new “narrative” yet?

In the end, the police might be telling the truth this time. I’m having a hard time believing it so far, based on the limited information, and the very limited video evidence, but maybe they are.

But here’s the other problem of living in a society shot-through with lies, particularly lies from law enforcement officers: when I was a kid, one of the things my dad taught me is the reason we don’t tell lies in the first place. That reason, for those who weren’t taught this same lesson, is this: once you become known as a liar, it’s difficult for others to believe anything you have to say.

In today’s world, where Scalia’s—may he never rest in peace—“modern police forces staffed with professionals” have lied so very many times, and been caught lying on video so very many times, that it is impossible for those of us who have seen this to believe anything they say, something needs to change.

And that something is that cops need to quit killing people. Period. They also need to quit lying about the killing that they’ve been doing, because even if they aren’t lying this time, a significant-enough population of us is unwilling to believe them anymore. The road to fixing that starts with cops recognizing this, owning up to this, and fucking doing something about this.

“A gun was found at the scene”? How do we know that gun was not brought to the scene, by one of the officers? It happens. Cops are far from above planting evidence. And while it’s entirely possible this New York lawyer who has appeared on various news stations, including Fox, MSNBC, CourtTV, and elsewhere, and who says that cops routinely did this when he was a prosecutor is lying, as with the cops who claim to have found a gun on Keith Lamont Scott, there’s no way to know that. Cops have been caught in too many lies told to cover up what look to many of us like murders. At best, they are negligent homicides.

And while I don’t know whether or not any gun claimed to have been found was planted in this case, I do know of cases where officers have planted evidence.

Ultimately, though, this question of whether there was a gun, or a book, in Keith Scott’s hands is almost a red herring. A distraction. Bait to lure us away from the real problem I’m talking about here.

Because if the killings do not stop, at some point there are going to be entire communities with no faith in the police, with no desire to cooperate with the police, and where police are not safe. Tonight, as I try to finish this blog post, Charlotte, North Carolina begins to look like a war zone. I’ve watched on Twitter as news people are attacked. This is what happens when the ties that bind break.

It will be too much to ask—rail against me for saying it however much you wish, what I say is true—for the people who have felt targeted for so long to sit still, to wait, to hope things will change. Rather, things just have to change.

And there’s only one way that change is going to come.

The killings have got to stop.

But there’s really only one group of people who can make them stop, and that’s the folks with their fingers on the triggers.

And a culture of lies meant to make us believe they had no choice but to pull them. [2]Don’t think I forgot to include Scott Greenfield in this post, either: he has his own article up this morning, which wasn’t there last night when I was writing this.