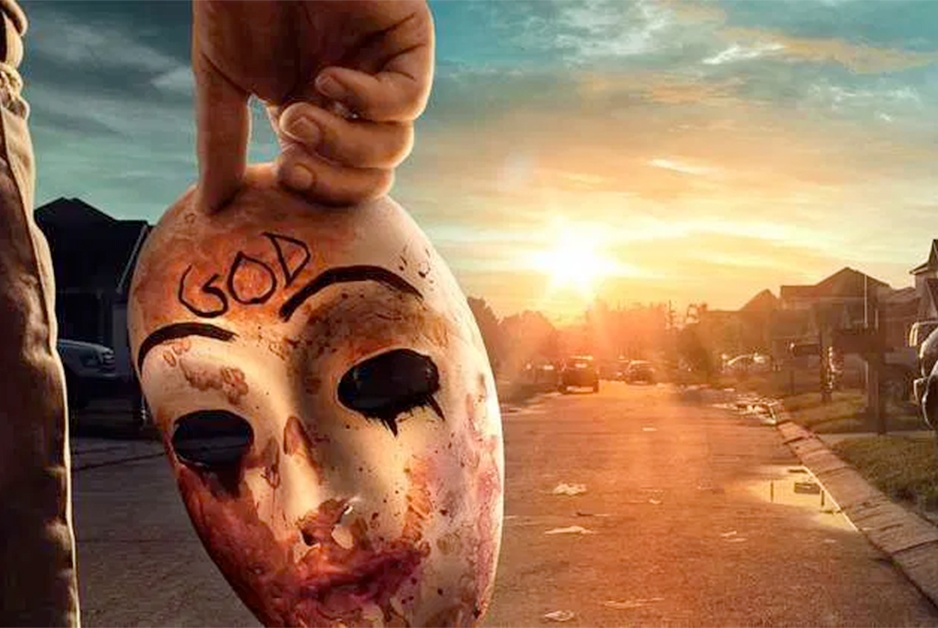 Legalizing Murder for More than 12 Hours per Year

In 2013, James DeMonaco riffed off an old Star Trek episode to come up with “The Purge,” a dystopian movie about a seemingly “law and order,” crime-free America — crime-free because once a year, all crime was legal, including murder, for 12 hours. The legal apparatus of The Purge is supposedly not racial. Yet the first movie in what has become a franchise involves a family targeted for destruction because they rescued the original intended target: a black man. The racism grows (and intertwines with class) through the franchise. The current (fourth) film highlights “armed white supremacists and a government that sees them as allies in an ongoing culture war.” [1]The fifth installment is due out July 2021. Plot details are unknown at this time.

The so-called “New Founding Fathers” back the fictional Purge, created so 12 hours each year for Americans can release all their pent-up aggression by going around killing the Other. The idea is that the rest of the year, these soulless, unethical, sociopathic criminals will be subservient and servile serfs for Corporate Oligarchs.

And they will not vote Republicans out of office.

You think I’m joking. But I’m not.

On a party-line vote, the Republican Oligarchs in Alabama — ostensibly part of the United States of America, which ostensibly exists under the rule of law — have voted to suspend the laws against murder not for a mere 12 hours. No, no! That might not “solve” the problem the Republicans seek to reach.

No, the Alabama version of Purge legislation is anywhere, anytime, anyone is protesting against anything you don’t like, and they happen to be in reach of your car. Twelve hours? Fuck that! We need twelve months, each year, where it’s okay to run down black people protesting killing people because of their skin color. Or anyone else protesting with, or for, black people.

One wonders, how this right to run down would apply for pro-Republican protesters. Say, for example, there were several thousand people at a pro-Trump rally, blocking off your chosen route through Washington, D.C., or Mar-a-Lago. Could a black person trying to get through be excused if he happened to accidentally run over a few whites standing in the way? Especially given what is known about how such whites feel about blacks? Would his fear for his life legitimize his running them down?

I’m going to go out on a limb here, and guess not.

Make no mistake folks. This is how we concretize, systematize, and structuralize — not to mention legitimize — racism. This is how we build it into our social and legal structures in a way that allows us to later deny that we did just that. Because you all know damn well any black person who runs down white protesters supporting what these Purge Legislators support is going to be prosecuted, notwithstanding the “colorblindness” of the written law. It will be white people who benefit from the immunity conferred by the new statute.

You need look no farther than the racial disparities on “Stand Your Ground” convictions to see that. John Roman sifted through 43,500 homicides from 2005 to 2009, and continued sifting until only “justified” homicides were considered.

So much for the colorblindness of the law.

This legislation is meant to do one thing, and one thing only: stop people who protest for positive social changes, particularly as it relates to race.

Out of Sight, Out of Mind

Can you imagine a large scale protest that doesn’t involve people being in the streets? Where are you going to find a sidewalk that will hold a few dozen, let alone a few hundred, or thousands, of protesters? It’s not really possible.

Did anyone stop to think that the protesters collected by ex-President (oh how I love that “ex” part) Trump blocked streets, too? (And, in fact,invaded the halls of Congress.) And what if — as anti-Democrat protesters in Michigan, Ohio, and North Carolina did — the protesters use their cars to block traffic? Are you allowed to bring in your big truck and start ramming them out of the way?

A large part of our duty as legislators is to protect our citizens.

Some might argue that allowing citizens to be run down in the streets because someone else got tired of waiting in their car, or didn’t want to take a different route, does not count as protecting them.

But, then, the Republican party these days seems to be firmly oriented towards the idea that only some citizens deserve protection. [2]And it has been this way since at least the late 1950s, when George Wallace declared, “Well, boys, no other son-of-a-bitch will ever out-n***** me again.” Ian Haney López, Dog Whistle Politics: How Coded Racial Appeals Have Reinvented Racism & Wrecked the Middle Class 14 (2014). And those needing protecting are whites who commit violence against blacks, and against those who support blacks.

Every attempt at Reconstruction requires a responsive Redemption.

No doubt, someone is going to want to point out that there is nothing in the law that says it was meant to stop black protests, or says that only blacks can be run down. I alluded above to the fact this ignores the reality of racism’s modern adaptations. [3]See DiAngelo, Robin. “Chapter 8: ‘New’ Racism.” Counterpoints, vol. 398, 2012, pp. 105–132. JSTOR, www.jstor.org/stable/42981488. Accessed 14 Mar. 2021. I can’t link it because JSTOR doesn’t want people to read it free without an account.

Certainly the United States has come some way in working to dismantle overt forms of racism. That’s not to say that we’ve done a very good job of it. There are still plenty of instances of overt racism — enough that I doubt anyone can honestly say they’ve never seen it.

As a society, we have moved more in the direction of condemning “traditional” forms of racism, such as Jim Crow. Human beings being what human beings are, in many cases this has just driven traditional racism underground. (Although a significant case could easily be made that leading up to, and definitely after, Trump’s election by just under half the American voters, traditional racism has slithered too far out from under the rocks where it belongs.) What we have not done much is to get rid of racism.

[R]acial progress in the United States is not a steady march toward equality. Valleys of reversal follow peaks of progress, and after the promising advances of the civil rights era we are deep in one such valley now.

Or, as I noted above, every attempt at Reconstruction requires a responsive Redemption.

The analogy of racist speech transformed into a dog whistle is quite well-explained in Ian Haney López’s book mentioned several times already. It goes at least as far back — if not farther than — George Wallace. After a successful reported speech, Wallace realized:

“They all hate black people, all of them. They’re all afraid, all of them. Great god! That’s it! They’re all Southern. The whole United States is Southern.” Wallace suddenly knew that overtures to racial resentment would resonate across the country.

After all, racists may not agree that #BlackLivesMatter, but they’ve come to see that optics matter.

We have come so far down that evolutionary path that we no longer question whether the “law and order” trope is code for enforced oppression of black and brown people. In fact, we’re quite happy if whites — those sympathetic to black causes — are arrested right alongside blacks.

Now that racism has become an inherent part of policing, we are just fine with completely dispensing with the tropes, and simply passing “colorblind” laws that will silence blacks — or other non-whites — and anyone who supports them.

Because if anything is clear in the United States of America, it’s that the Oligarchs don’t need the laws to specifically state that they can be used to target blacks, and those who align with blacks. Any old law will do, even if its use requires stretching the imagination.

The July 3 protest in Aurora, Colorado, seemed, at least on the surface, like just another of the hundreds of racial justice protests that have swept the nation this year. Demonstrators sat outside a police station chanting and playing music. Although they said they wouldn’t leave until their demands were met, the protesters were cleared out by police around 4:30 a.m.

But several of the protest leaders are facing felony attempted kidnapping charges for allegedly imprisoning police officers in their own precinct during the protest—charges their fellow activists are calling absurd.

— Kelly Weill, “They Protested at a Police Station. They’re Charged With Trying to Kidnap Cops.” (September 29, 2020)

Because if there’s one thing racists have plenty of when it comes to using the law to proscribe blacks and black supporters, it’s imagination.

Unfortunately, there seems to be no way to purge them of that.

Did you enjoy this post? Leave a comment below! And if you haven’t already subscribed, click the button and get my free ePamphlet on “How to Hire a Criminal Defense Lawyer.”Subscribe Now!