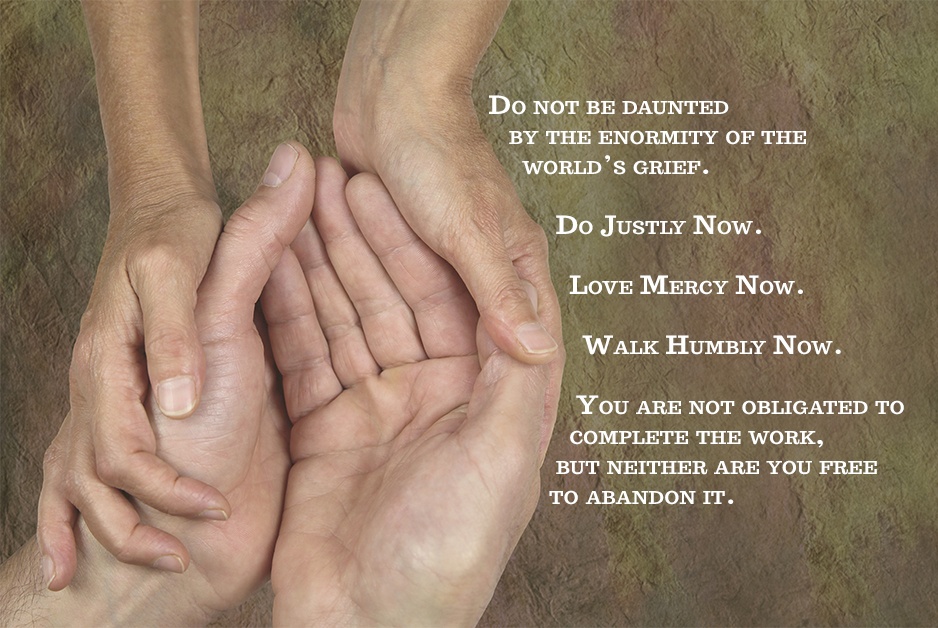 The words in the featured image for this post are someone’s combination of words for the Pirkei Avot, a Jewish work the title of which is usually translated, “Ethics of the Fathers,” and part of Micah 6:8, which is a book of the Tanakh, or, as Christians call it, “the Old Testament.”

I have not blogged in some time. Let me be frank about the reason: I spent much of last year feeling very pessimistic about ordinary people, and about their ability to care about anything. In fact, I started writing this post about three days ago. The article that inspired it has now spread throughout the news.

My pessimism and my ennui toward blogging have been enhanced by the failure of our courts to stand by any of their own precedential rulings in order to, for just a couple examples, hold police officers accountable to know the laws they’re supposed to enforce, or to stop them killing people—1000 killed in 2017, some of the unarmed people were shot for no other reason than that police officers have no incentive to do their jobs correctly.

Writing about the wrongs that are occurring on a daily basis became depressing to me not just because of the content of what I might have written—and, though you haven’t seen any, there are many unfinished drafts of articles that I’d started in my WordPress control panel, waiting for me to decide whether to finish them, or just leave them in the digital dustbin—but it’s not just that, as I said. It was also a recognition that these things could not happen, unless we allowed them to happen.

That they keep happening means that we have not the will to stop them. That, in some way, the majority of us are okay with things as they are.

And so it required all my energy to keep fighting in the face of this overwhelming lack of caring, especially the “we don’t really care what the law says as long as what we want to happen happens” coming from all quarters, including the courts. There was little left for writing, and what there was went to writing motions, writs, and petitions, some of which—surprisingly—actually worked.

A while back—this post was originally written then; I just didn’t post it until today—I ran across an article about a woman who was unceremoniously dumped from an emergency room, nearly naked, onto the freezing streets of Baltimore. The article was written after a man who said he was a psychotherapist (but not the psychotherapist of the woman), Imamu Baraka, recorded everything that was done. The hospital “is investigating.”

In the video, several people who appear to be security guards can be seen dropping the woman off at what might be a bus stop, where she sits appearing disoriented, and shivering, wearing nothing but a hospital gown, and a pair of hospital socks. When questioned by Mr. Baraka about whether they were just going to leave her there, nearly naked, in what he said was 30-degrees-or-colder temperatures (and you can see his breath from the cold air), the grunted responses of the uniformed thugs is unintelligible for the most part, though one appears to claim she was “medically-cleared.”

So let’s dump her on the street. In below-freezing temperatures. Wearing nothing but a hospital gown.

As a human being, these things bother me immensely. It scares me what we’ve become, and are becoming. Our attitudes towards others are completely lacking in compassion, empathy, or even just limited, basic understanding.

Somehow, we seem to believe that it’s okay to do this to others, like this woman, but never stop to think about what that means.

But, it could be you. It really could.

Because once it becomes okay to do this to any human being…well, aren’t you a critter that fits that category? Are you not just “any human being” to other people? 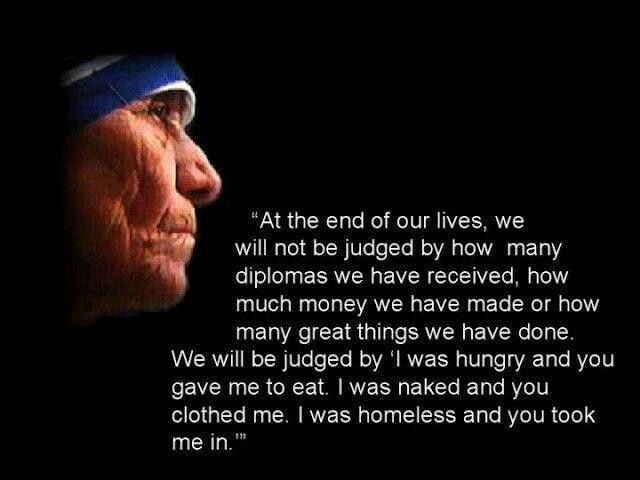 So many times I encounter this attitude. And, since I am—in addition to being a human being—a criminal defense attorney, I see it not at all infrequently in courtrooms. Prosecutors, and judges, who do not care what their draconian enforcement of overcharged cases, and excessive punishments, will do to an individual. Or to society.

First, we fail to deal with the health issues. Many—if not most—people using drugs are self-medicating. Their reasons for self-medicating can range from the kind you maybe could be excused for not caring about, like not wanting to do the hard work of living, all the way to the ones that make you a monster, like having a significant mental illness that causes them immense psychic pain, and from which they self-medicate to escape.

But, secondly, by failing to deal with the health issues, and turning them instead into criminal law issues, we completely fail to ever fix anything. People who have mental illnesses, self-medicate, and then get locked up for that do not get better. Instead, their lives become more difficult. Instead of helping to stabilize them, we temporarily lock them away, where they receive little-to-no treatement. And then when they’ve served their time, we dump them back on the streets to try to find a way to self-medicate again, which usually leaves them no option but to turn to real crimes, like burglary, robbery, and other theft crimes.

As I argued to a court not terribly long ago, it’s technically not the job of the courts to “do justice.” Technically. I mean, we like to think that’s what they do, but the job of courts, technically, is to follow the law.

Of course, as I mentioned above, for the most part they do not do that, either.

And frequently, the failure on one front reinforces their failure on the other front—such as when the Eleventh Circuit Court of Appeals recently ruled that there was no culpability for use of excessive force when police officers break a person’s leg, even if that person is not resisting arrest.

“Resisting arrest,” of course, is the bullshit story that is given for why people get injured when police ignore the law. And, of course, the Eleventh Circuit has a history of not caring what the police do, or how they do it. But now I’m meandering.

There is someone whose job is to “do justice,” by the way: it’s prosecutors. But they’re too busy trying to rack up points with supervisors, or the public, or they’re just plain confused about what justice is, so they don’t do the job of justice, either.

What about defense attorneys? Well, while much of what we try to do, and argue, is aimed at achieving justice, it’s not our jobs, either. Our jobs are basically to be the challengers, if you will. Our job is to be the fly in the ointment of the system that wants to imprison people. The prosecutors put up some evidence, and we challenge that evidence. We either show that it’s not good evidence, or why it’s not believable evidence, or why it’s not trustworthy evidence. Essentially, our job is to poke holes in whatever story the prosecutor might be trying to tell.

You might wonder why this is. But the answer is fairly simple: the prosecutor’s story is always going to be slanted, spun, or in some way “not quite the whole truth.” That’s going to be true even when the prosecution is right, and the accused person really did commit the crime. Part of this goes to the way our adversarial system was built, and part of it goes to the fact that prosecutors don’t really seek justice—just convictions. But, as I said, even when they’re not wrong, they oversell.

So our job is to try to provide reasons for being suspicious of what they tell courts, and jurors. If we defense attorneys do our jobs right, whatever is left is hopefully closer to the truth. This job, of challenging, and tearing at the prosecution’s case, is ours even if, in some way, the result might turn out to be unjust. You might—many people do—hate us for doing it, but the creators of our system felt that this was the best way to insure that we do not consistently lock up innocent people. It doesn’t always work, as the number of exonerations shows, but that’s largely the fault of the people in the system not doing their jobs, and not so much the fault of the system itself.

That really just leaves one group, when it comes to doing justice in the courtrooms of our land, and that’s the jurors. And while, by and large, jurors do try to do their jobs, as they see them, too often they don’t know that their jobs involve doing justice. This is because they’re told—and it’s only slightly a lie—that their job is to follow the law as the judge instructs them. It would appear from this instruction that a jury is really just a box of computers: the prosecution tells them a story, with us defense attorneys trying to poke holes in it (or telling an alternate story), the judge tells them what the law is, and the jury computes the result.

That’s not really how it’s supposed to work, but—funny thing—courts try to keep us from telling jurors that they can do anything differently than that: that they can do what they think is just, even if it means not convicting someone who they might actually think is guilty.

And I do think that there are times when even someone who has broken the law should not be convicted (and, hence, punished). Again, going to what I said above, a mentally-ill person may have broken the law in various ways (like self-medicating), but locking them up in a prison cell won’t help them, won’t help us, and therefore most definitely will not make the world a better place.

Ultimately, too many people just do not seem to care about what kind of world we’re building together. Many, perhaps, don’t even realize that we are building a world together. But I do. These are the things that concern me.

And my belief that too many people are pushing in the opposite direction, my view that too many of us do not give any thought to whether what we’re doing makes the world a better place, or a worse place, is why I haven’t done a lot of writing here. My focus, instead, has been to re-direct all the free energy I have to trying to get even better at doing my job.

Because one thing I do know makes the world a better place: fewer people being locked up, and treated like animals. Because while most might think it only happens to someone else, and they don’t care, I recognize that it could happen to any human being.