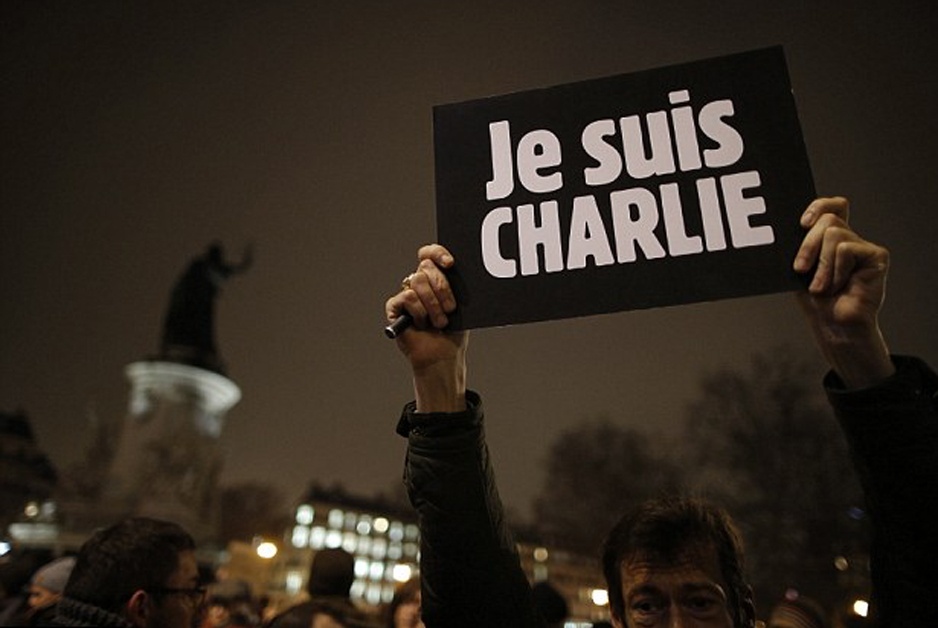 Censorship issues have not been high on my list of things to become upset about. It’s not that I don’t care about them. I care very much. After all, I have experienced first-hand what can happen when someone doesn’t like what I’ve written. But much of my energy goes to dealing with broken criminal law issues, like broken law enforcement, and our broken laws, and our broken judiciary, and our whole broken concept of “justice” in the United States these last few decades. And freedom of speech does not often factor directly into that.

Of course, as Mark W. Bennett can tell you – because he’s fought an attempt to criminalize speech, and won – this could change.

Yet, despite not being high on my list of topics about which to blog, who can ignore the persistent attacks of the last few weeks – especially the recent one in Paris – against those whose worship, or lack thereof, is not approved by the attackers? Not me.

I’m certain that by now there are few intelligent people who have not heard about Paris, and Charlie Hebdo, and the fact that the killings occurred over cartoons.

Yes, they were usually racist cartoons. Charlie Hebdo, near as I can tell, does not always seem like the most sympathetic poster-child for freedom of speech. Ironically, since (again, near as I can tell) Charlie Hebdo‘s historical underpinnings were anti-establishment liberalism, at least one writer writes – and some “tweets” I’ve read on Twitter also say – that Charlie Hebdo cartoons were, well…here are a couple quotes:

Here’s what’s difficult to parse in the face of tragedy: yes, Charlie Hebdo is a French satirical newspaper. Its staff is white. Its cartoons often represent a certain, virulently racist brand of French xenophobia. While they generously claim to ‘attack everyone equally,’ the cartoons they publish are intentionally anti-Islam, and frequently sexist and homophobic.

And, after including several examples of Charlie Hebdo cartoons,

These are, by even the most generous assessment, incredibly racist cartoons. Hebdo’s goal is to provoke, and these cartoons make it very clear who the white editorial staff was interested in provoking: France’s incredibly marginalized, often attacked, Muslim immigrant community.

Other stories paint a slightly more sympathetic view. And the editor of Charlie Hebdo, quoted in a Mashable story, had this to say about their allegedly anti-Muslim cartoons:

We are only criticizing one particular form of extremist Islam, albeit in a peculiar and satirically exaggerated form. We are not responsible for the excesses that happen elsewhere, just because we practice our right to freedom of expression within the legal limits.

Today, Charlie Hebdo is perhaps rightly considered a martyr in the fight for freedom of speech. I know a lot of people I admire, and friends, believe that, and are writing about it.

It doesn’t matter if we approve or not of the content of the magazine’s speech. That has nothing to do with the right to publish it.

And (of course) Scott Greenfield,

Whether the gun is in your hands or the hands of police sent out to enforce the laws you demand makes no difference. We are all Charlie Hebdo. Some of us are the people who would express ideas that offended the fanatics, and others are the fanatics who want us dead.

You’ll note that the article titles all contained some variation on Being Charlie Hebdo. Another thing they share in common is that they all reproduce the images from Charlie Hebdo that have so offended some extremists within Islam that they find themselves unable to act as civilized human beings, and instead go out and kill the creators, or purveyors, of the offending images.

They do this to show that they will not be intimidated, as I intended….

Okay. I’ve now been staring at my computer monitor for close to two hours, possibly longer.

I’ve said before that one of the reasons I blog is because writing is a way of thinking. This morning, before I started writing, before I started thinking beyond thinking about a few of the above-mentioned blog articles which I’d read, I temporarily changed my Twitter profile picture. I’ve actually never done that before, but I wanted to make a deliberate statement about freedom of speech, and the refusal to be intimidated. The image I chose was – deliberately – one of the mildest I could find of the covers from Charlie Hebdo.

One Twitterer called me on it.

Now, I still don’t fucking know exactly how to respond to that. Obviously, I can support free speech without passing along offensive cartoons. But that was not the initial point, as you will recall from what I said above. (Hint: It was about not allowing oneself to be intimidated by murderous asshats who are willing to kill when they are offended by people “speaking” – especially through cartoons – things of which they, the murderous asshats, do not approve.)

And to engage in just a tiny little logical fallacy here – tu quoque – as I not-so-sweetly pointed out to Sugar at the time, her own Twitter feed no doubt offended even more people, but for different reasons. If she’s going to criticize me for being offensive, I’m not going to take her seriously.

But I’m not actually a big fan of logical fallacies, however much I may on occasion fall prey to them myself.

And around that same time, I started writing this blog post. Which is when I started thinking about things more seriously. And I thought about one of my friends. He’s a guy I care about a great deal. We went to law school together. We were both – at different times, of course – deans of Delta Theta Phi. We’re both in private practice: he maintains a kind of specialized family law practice, and I, of course, am a criminal defense attorney. I refer clients to him; he refers to me; sometimes he handles family law issues connected to a case for which I’m handling criminal law issues. We talk frequently.

And he’s Muslim. Religious. Though that didn’t stop him from standing up for me when my wife and I were attacked (verbally, not physically) one year over Hanukkah decorations at our house.

What would he think about me posting the images, I wondered?

So I called him. We had a good conversation about what was going on, a little about the fall-out, and I told him about this post I’m trying to write here. I asked how he would feel if I posted the images here, not because I approved them, but because I was writing about them. “What if I provided examples?,” I asked.

“Well,” he said. “It would offend me, because in our belief system you don’t make such images.” But he went on to say that he recognizes that he lives in a pluralistic society. “If you feel that you need to include the pictures. Then you should include them. It’s not going to change anything about the way I think about you.”

And, you know, I don’t have to include them. Not to talk about free speech.

After thinking – yes, yes! that is what I love about writing blog posts, and it’s why they sometimes take me hours – I don’t even have to do it to show that I’m not afraid of murderous asshats. Not to trivialize this, but it’s the same reason I wear pink a lot, even though there are people in the world who see that as some kind of reflection on my masculinity. I like pink. And I have no need to prove to anyone that I’m masculine (whatever that means, anyway).

In the end, I don’t know what to think about Charlie Hebdo. But I do know what I think about those who would kill because a cartoon offends them. And what I think pretty much mirrors what Hassen Chalghoumi, the imam of the mosque in Drancy, a suburb of Paris, France, said:

They have sold their souls to hell. This is not freedom. This is not Islam and I hope the French will come out united at the end of this.

This, too, I know: My Muslim friends are not responsible for the excesses that happen elsewhere, just because some murderous asshats try to squash our right to freedom of expression within the legal limits.

And so, finally, this too, I know: I do not need to offend my friends, to fight our enemies.