[There is a]n overwhelming negative perception of law enforcement, which is making their jobs difficult.

This is a huge problem:

In the Seattle metro area, police agencies are having a hard time finding qualified people who want to serve, according to Pierce County Deputy Sheriff’s Guild president Cynthia Fajardo. Seattle officers and their colleagues from other agencies say they believe increased quarterbacking, second guessing and simple lack of respect are large contributing factors to the lack of desire to work in the public safety industry.

Okay. Maybe not such a problem.

But assuming, for the sake of argument, that this is a real problem, is – as law enforcement officers quoted in Konopasek’s story state – media, particularly social media, the cause?

In 2011, the United States Department of Justice sent a letter to the mayor of Seattle, Washington, relating to an investigation of the Seattle Police Department. This post isn’t really about that letter, so I’ll just note that it can be summarized by one of its sentences:

Our investigation finds a pattern or practice of constitutional violations regarding the use of force that result from structural problems, as well as serious concerns about biased policing.

Anyone reading my blog for awhile will know that I have a habit of creating posts like this where nearly every word in the post is a link to a story that supports the point I’m making. There are enough stories of separate and distinct incidents of police brutality, police misconduct, police killings of American citizens, for me to keep right on doing this with every post I write. I’m not going to keep doing this as often, though, because I’ve realized that one reason I don’t blog as much anymore is the amount of time I spend linking in all those stories. Even though they’re plentiful, and not hard to find, it takes time to read each story, validate that I haven’t already used a story about that same incident, and make sure the story doesn’t distort the facts before I link it. I will still link to such stories occasionally, especially when they have something important to add to what I’m saying. Otherwise, any readers with more questions are welcome to google what I say if they have any doubts.

What has made it so easy for me to find these stories is that police in the United States kill so many people every year, every month, every day.

Aside from this frankly sad and disgusting fact – that there is increasing evidence “To Protect & Serve” has become “To Pulverize & Shoot” – a disproportionate number of victims of police brutality are black. Brian Becker, the director of ANSWER Coalition, recently said that a black man is killed approximately every 28 hours in the United States. 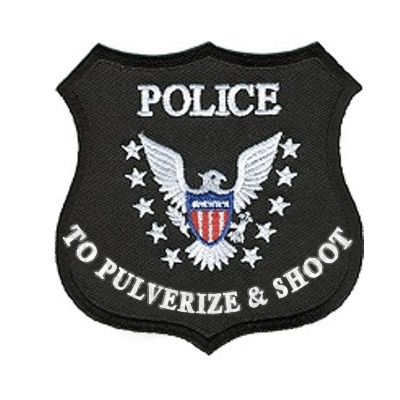 To recognize this fact it is not necessary to argue that police officers are mindfully evil, fascistic, racist motherpickers.

Yet trying to somehow prove the opposite: that black cops sometimes kill white Americans is – pardon me for being so colorful – a red herring. Let’s not get distracted. As Arthur Chu asked on Twitter:

WTF is the impulse behind changing #BlackLivesMatter to #AllLivesMatter. Do you crash strangers’ funerals shouting I TOO HAVE FELT LOSS

But to get back to my main point, without firing epithets at the police, stories like Konopasek’s, and the statements of law enforcement it reports, just do not hold water.

There is a very real problem with law enforcement in America. Since Michael Brown’s death – which does seem to have finally sparked a longer-than-five-minute conversation about that problem – there have been fourteen other teenagers shot and killed by police officers.

It isn’t the stories about these children, and other Americans, who have been shot and killed that is the problem. It is the fact that they happened. The problem is not that social media – or any media, for that matter – is reporting the stories. If the incidents did not occur, there would be no stories to spread. If U.S. citizens were not being killed by law enforcement officers at alarming rates, we would not be talking about it. If the numbers of black Americans killed were not so disproportionate to their numbers in the general population, we’d be having a different conversation. But regardless of race, there is a problem.

The increase in police brutality in this country is a frightening reality. In the last decade alone the number of people murdered by police has reached 5,000. The number of soldiers killed since the inception of the Iraq war, 4489.

The problem is with the behavior of law enforcement officers, and unless we –all of us; not just black Americans – start by recognizing that there is a problem, we’re never going to be able to solve it.

And here’s another important point, as Scott Greenfield noted today: [1]You knew he was going to be mentioned here somehow, right? I mean, isn’t this my blog?

[P]olice are citizens too. It’s often awkward to describe interactions between police and non-cops, as there really isn’t a great word to differentiate between the badged and the unbadged, but cops are not military, they are not space aliens, they are not a better breed of human. They’re citizens with guns and shields.

Cops sometimes get shot by cops, too. (Sometimes they just threaten to shoot each other.)

As I said, there is a real problem, and it’s not in the reporting. In Utah, in the last five years alone, police have killed more Americans than have gang members, drug dealers, child abusers, or perpetrators of domestic violence.

“The numbers reflect that there could be an issue, and it’s going to take a deeper understanding of these shootings,” Chris Gebhardt, a former police lieutenant and sergeant, told the newspaper. “It definitely can’t be written off as citizen groups being upset with law enforcement.”

Frankly, with what I’ve seen of police officers since becoming a criminal defense attorney – and this article really only scratches the surface of the problems since it doesn’t even get into testilying, and other forms of corruption – I’m glad to hear that fewer people wish to become police officers. If true, though, the fault isn’t with social media, or any other media, and their reporting.

The blame lies with the attitudes and behaviors of law enforcement agencies, and agents, themselves.