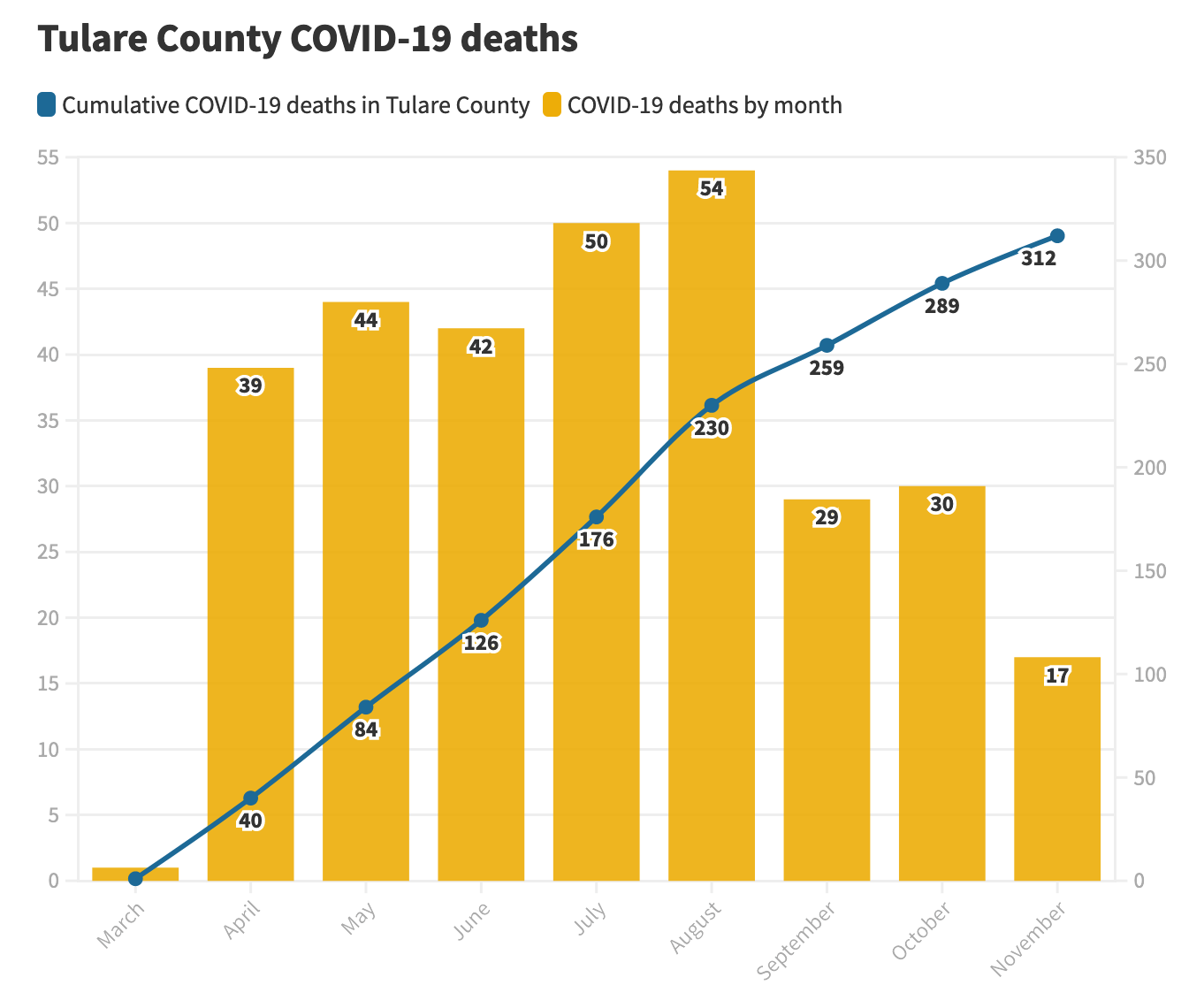 All Criminal Jury Trials Suspended Through End of 2020

Tulare County Superior Court — not known for its lack of redneck law-and-order anti-science mentality — goes where Fresno fears to tread. It seems Tulare County judges have decided survival is more important even than railroading people into prison. They suspended criminal jury trials until 2021. They did the right thing, not only to protect themselves and the public: coronavirus makes jury trials unfair.

Cases of the Hoax Virus — which has so far killed well over a quarter-million people in the United States — have risen 600% above California benchmarks in Tulare County.

Fresno’s judges, however, are not as wise, nor as librule, as Tulare’s judges.

Thus, Fresno County summons panicking people with significant health problems for jury duty. Some of them are already on daily nebulizer treatments.

I have also been informed by one of these people — who asked me what to do about the jury duty summons — that apparently there are doctors in Fresno who refuse to write such patients letters to help them avoid exposure.

This person takes daily nebulizer treatments — sometimes more than once a day — and hasn’t left the house except to go to the doctor for the last 10 months.

But at least one prominent local doctor’s office refuses to write letters excusing such people from jury duty. And, sadly, that’s the doctor of the patient I just mentioned. And, by the way, he’s a lung specialist.

Which raises the question: “If such a patient, having been refused a letter by the doctor explaining his condition, gets COVID after a visit to the courthouse, and then dies, what is the doctor’s liability?” And a related question, “Is it medical malpractice for a doctor, knowing the seriousness of his patient’s condition, to refuse to write a letter suggesting the patient be excused from jury duty?”

As a criminal defense lawyer, I don’t know the answer to this question. Nor am I going to opine on whether that doctor is subject to a charge of criminal negligence in such situations. But I bet I know some civil lawyers who may have occasion to test this out, if one of his patients does die.

The Fresno Jury Commissioner supposedly told the patient that, with a doctor’s note, a person could be excused from jury duty. More importantly, the Commissioner expressed surprise the doctor had a policy against it. (Am I the only one who sees those med-mal lawyers smiling in the background?)

Imagine being the doctor with the power to potentially save someone’s life, and refusing to do it.

I cannot help but wonder what would happen if all of us — including the aforementioned doctor who allows unmasked people to sit in his waiting room alongside others anxious not to die — took coronavirus seriously for just a month or two. Could we eliminate it?

I suspect we will never know.

It would be nice, though, if people — including the Rich Doctor, and our Great Robed Oligarchs — would take the pandemic seriously. To date, more than a quarter of a million people are dead.

Let me say that again: more than a quarter of a million.

Want some perspective? Imagine all those deaths here in Fresno. Half the population of Fresno, or more than one-fourth the number of people in all Fresno County, disappear.

Imagine that. Really, stop reading for a second, and actually visualize it.

And that, of course, is just the dead people. The U.S. adds hundreds of thousands every couple of days to the list of those impacted — either with symptoms, hospitalized in ICUs, or just testing positive with unknown future consequences to their health.

We may hope that the new vaccines will “fix things.” But the distribution of the vaccines is a future event. We don’t really know what is going to happen.

Except that by February, we expect to hit a half-million dead.

“While the news is promising, [vaccines] are still months away from being available to the general public,” [infectious disease expert Dr. Carla McWilliams] continues. “And while our treatment of those infected with the virus is better than when the pandemic started, none of those treatments guarantee that someone won’t suffer a serious illness or even die from the virus.”

— Cleveland Clinic, “Why It’s So Important to Take the Coronavirus Pandemic Seriously” (November 18, 2020)

At this point — based on my work bringing me into contact with a bunch of maskholes, including some judges — I’m wondering if I will be one of them.

But at least I’m not in Philadelphia.

Fresno Has Not Been Spared

Not exactly flattening the curve, as you can see.

The article I linked at the top of this post tells just how quickly things are heating up in Fresno:

CMC had been updating their dashboard twice a week. But on Wednesday, a message posted out on their social media accounts says that is now changing.

“Due to the rising number of COVID cases in our community, this dashboard will be updated three times per week (Monday, Wednesday, Friday) by 10 a.m.,” CMC wrote on their Twitter account.

That’s seven ambulances — with their entire crews — out of commission. When minutes count, they’re sitting there for three hours. Not helping other people who need ambulances. Just sitting in the driveway, with their patients, waiting for hospital beds to open up.

In other words, for people to die.

It’s not just beds. And it’s not just Fresno. Hospitals in half our nation are short-staffed, not just because of the rising number of coronavirus cases generally, but because medical professionals become infected, and die, or have to stop working, too.

Thankfully, this is all just a hoax.

It’s Not a Hoax

But, of course, it’s not a hoax, however much covidiots, Republicans, and maskholes —both off and on their deathbeds — may insist. (Covidiots and maskholes, by the way, can cause damage without killing people, too.)

Perhaps because we seem to have so many more covidiots and maskholes than any other country, we truly are Number One when it comes to the number of cases, rapidity of rise, and deaths.

I have another friend (yeah, somehow, I have a few) who believes that it’s a hoax, and that people are dying of other things — more natural, more explainable — and it’s just being blamed on COVID.

If you think about those ambulances, maybe he has a point. An ambulance stands parked, out of service. Someone dies of a heart problem. Is that a COVID-caused death? Or if your non-COVID emergency causes you to need a bed, but they’re all full of COVID people, will your death be COVID-caused?

Well, yeah. Except that despite my friend’s protestations, we aren’t counting that as a death-from-coronavirus.

How people can continue to believe it is a “hoax,” when the virus itself sometimes takes out entire families, is beyond me.

How to Control an Epidemic

In June 1889 — yes, EIGHTEEN 89 — Dr. G.T. Swarts addressed the 40th Annual Meeting of the American Medical Association. He read a piece titled “The Control of Epidemic Diseases,” and noted:

In many cities, from the known contagiousness of these diseases, an immediate control of the cases is made by placing the case and the family, and those immediately exposed thereto, under quarantine. This is made more or less strict, and hence more or less of a success, as the advanced knowledge of the health officer may order, or in proportion as the health officer may have been able to affect public opinion.

The article, which is somewhat dry reading (albeit short), discusses two epidemics. Reading it, the paragraph above struck me, near the start of the article, and this one at the very end.

As the only precautionary measure possible, the public were at once advised to boil all drinking-water in order to destroy any specific organisms which might have found their way to the tap, and to remove all filters from the faucets. The epidemic rapidly subsided, whether from cessation of the contamination or from the destruction of the bacilli in boiling the water it is impossible to say; probably much from both.

Now, an epidemic is not the same as a pandemic.

Yet you can distill at least a few interesting points that don’t rely upon the distinction. The first is that even in 1889, they already knew how to control the spread of disease, and yet today we still seem to re-learn lessons already known.

For example, quarantine works. But how well it works depends upon how well the restrictions of a quarantine are actually followed. If everyone does well what science has shown reduces the spread of disease, it works pretty well. If even just some don’t, it doesn’t.

It’s as simple as that.

Another point: science is not perfect, but even when not perfect it works better than ignorance. It’s science that taught us not to throw infected poop on the banks of rivers from which we will get our drinking water.

Let’s come back to that quote from 1889. The measures to control the spread of contagious disease work best when strictly enforced.

The world right now faces an epidemic like nothing seen in a hundred years. Our technology both makes the spread easier, and — if we would adhere to it — the blockade against the virus more endurable.

But one thing remains true: to stop the virus, you have to shut down the road it uses to spread. Even our most strict “lockdowns” (which aren’t even remotely lockdowns) have not done this.

Tulare County’s suspension of jury trials, problematic in some regards, strives to take the courts out of the transmission loop. But suspending jury trials during coronavirus also makes for more fair trials.

In addition to health data, some orders cited growing difficulties in getting jurors to hear cases. “Citizens’ increasing inability and reluctance to serve on juries is understandable,” said a Nov. 6 order signed by Chief Judge D.P. Marshall, Jr., of the Eastern District of Arkansas, “but it creates the possibility that our juries will not reflect a fair cross section of the Eastern District.”

Coronavirus not only alters the demographic composition of juries, but also the attitudes of jurors.

Increased stress and uncertainty, fear of illness and death, and other changes in psychological health and well-being can dramatically affect how individuals process information and make decisions.

Of course, there is a flip-side to this. That makes the question of “what to do” regarding jury trials more difficult. On balance, though, it seems coronavirus is shredding not just our lungs, but the constitutional soundness of our juries.

Justice delayed is justice denied, Ginsberg said, but her group worries the justice on offer right now doesn’t meet constitutional muster, especially when it comes to the right to a jury of one’s peers.

This is why our courts must combine a temporary suspension of jury trials with a greater willingness to release all detainees from the jail who have not been convicted of crimes. (My thoughts evolved since writing this, and I probably need another post to explain that.)

If we had been as strict about “lockdowns” earlier on, we — and our economy — would be in better shape. But what’s done is done.

The covidiots and maskholes who have resisted the simple measures are responsible for killing the economy, our Constitution, as well as tens of thousands of their fellow Americans.

To gain control of this virus, we must shutdown hard, and maintain strict protocols, including masks, social distancing and not gathering in large groups, like jury pools.

Judges need to get on board with this.

After all, even oligarchs aren’t immune from coronavirus.