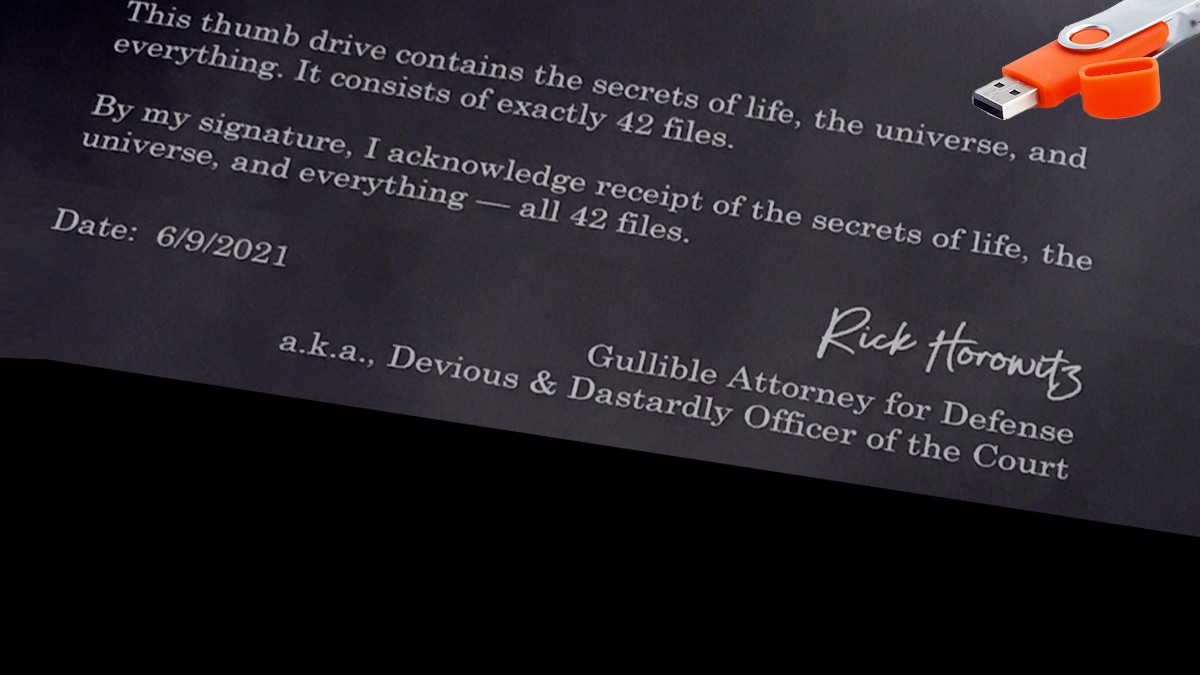 Defense Attorneys Defend the Bad, So They're Bad

Perhaps about two years ago, one of my cases was being moved from one courtroom to another. The DA in the second courtroom asked if I could go get the file from the first courtroom. I broke out laughing.

“Yes they will, you’re an officer of the court.”

“True. But, I’m a defense attorney,” I reminded her. “I represent bad guys. Therefore, I am a bad guy.”

You know: the Good Guys (and Gals).

Is That a Duck?

Recently, I observed a trial that reminded me of this.

Ironically, I was observing because the prosecutor in that case is one with whom I also have a case that will eventually go to trial. And, in my case, the prosecutor is spending more time attacking me — my credibility, my ability, and anything related to me — rather than the actual issues in the case itself. He is working hard to convince the judge in our case that despite the fact I am, like him, theoretically an officer of the court, I am a devious and dastardly officer of the court.

Though how I can be that, and be simultaneously stupid (the other thing he wants to make me out to be), I don’t quite get.

In any event, I smiled — a sad smile — as I realized he was doing that same thing in the trial I observed.

Just as is happening in my case, the defense attorney was missing some important discovery.

I wondered: am I looking at a duck who doesn’t yet know he’s a duck? Or knows it, but is still successfully hiding his feathers? A prosecutor who ducks out on providing discovery as required by law? I mean, if what I was hearing is true, that prosecutor committed a felony.

A Contest of Credibility

Still, I’ve always understood the rule to be that we just assume deviousness and dastardliness in defense attorneys. Courts do not usually appreciate using that status, or belief, or mythconception as a basis of attack during a trial. Yet, here it was.

And with just the piece needed to discredit the expert’s opinion.

To add to my astonishment, the judge — and this reminded me why some people sometimes refer to judges as “prosecutors in black robes” — appeared to be aiding and abetting the prosecutor.

Specifically, when the defense attorney wanted a “late discovery” jury instruction, the judge asked the basis for his belief that he did not have the missing discovery.

“Judge, for one thing, the DA provided Bates-stamped discovery. And the Bates stamps end at number XXXX.”

A Prosecutor’s Statement is Gold

Then the judge said, “Mr. Devious & Dastardly, you say that you are missing discovery. But the only evidence you provide for this are your own statements.” The judge rebuffed the offer to show the thumb drive to the court.

That thumb drive might count as evidence, but the prosecutor had already said, “I have receipts, signed by someone from Devious & Dastardly’s office. The receipts show the thumb drive was picked up. The evidence was on the thumb drive.”

When one goes to the DA’s office to pick up discovery, the receptionist typically gives you either papers, or a CD/DVD, or a thumb drive. It might be any combination of the three.

She also hands you a paper to sign “acknowledging receipt” of the discovery. The receipt will say what it is the DA’s office gave you. Police reports. Videos. Photographs. Whatever it was, it will be listed on the receipt.

But is that really what you received? No. You received a thumb drive, or a CD/DVD, or a stack of papers. Or some combination thereof.

Those items might include the listed discovery; they might not. Unless you sit down with your computer, pop in the CD/DVD, or thumb drive, or unless you read through all the discovery right there on the spot, you do not know if what you have is what is listed on the receipt. All the receipt really shows is that the receptionist handed you something. (Note: sometimes a DA gives you stuff in court, and has you sign a receipt. The same thing, of course, is true there.)

Moreover, the “receipt” might show that you “received” a DRE report — as it did in the case I was observing — but does that mean you received every single page of the original DRE report? That is what was at issue in this case: the face sheet was allegedly missing. The receipt would show, at most, that among the other things on the thumb drive, counsel would find “a DRE report.”

Nevertheless, if a devious and dastardly officer of the court — a.k.a., defense attorney — later claims not to have certain discovery, the DA waves the receipt in the air.

Welcome to the Realm of Darthon.

The truth of the matter is that propagandists for the Law & Order crowd, including victims’ rights groups, District Attorneys, police advocacy groups, and certain television shows, promote the idea that defense attorneys must be devious and dastardly officers of the court.

After all, if they were not, how could they support a robust Constitution defend those people? (Here’s one answer. And another good one. Here’s one of my answers.)

To add insult to injury, the government has way more power than we do. [1]Earlier this week, an Attorney General filed a request for an extension of time in a case I have before the California Supreme Court. Among her reasons? She’s writing a brief, but it will have to go through multiple levels of review, after each of which, she will need to revise the brief to meet objections or questions. Then it will go to someone who will format it for submission to the Court. It must be nice to have people to review your briefs, to help you make them better, and then someone else to handle the formatting — which can sometimes take hours to do. I guarantee you neither I — nor most of the private devious and dastardly officers of the court that I know — have that.

Then, to top it off, we are the stepchildren, the Cinderellas (but without the fairy godmothers, glass slippers, or princes), the devious and dastardly officers of the court.

What we say is always suspect. We may back our words with evidence, but that evidence itself is suspect. After all, who is offering up that evidence? It’s us! The dastardly and devious officers of the court!

As in the trial I observed, the statements of a defense lawyer are disbelieved. Attempts to provide evidence get shot down. Or evidence is explained away. The prosecutors? If they said it, it must be true. The judges know this because they used to be prosecutors — and, when some of them lied, they depended on prosecutors in black robes to save them. As judges, literally thousands of them continue to break laws, or their oaths, and remain on the bench.

Judge Kozinski, formerly a Ninth Circuit Court of Appeals “justice,” before retiring after being accused of sexual misconduct, said,

[T]here are disturbing indications that a non-trivial number of prosecutors — and sometimes entire prosecutorial offices — engage in misconduct that seriously undermines the fairness of criminal trials. The misconduct ranges from misleading the jury, to outright lying in court and tacitly acquiescing or actively participating in the presentation of false evidence by police.

So who really are the devious and dastardly officers of the court? I have some thoughts on that.

Oh, and that file? At the DA’s request, I troddled off to get it.

The clerk said a prosecutor would take it over. I smiled — a sad smile — and troddled back to await its arrival.