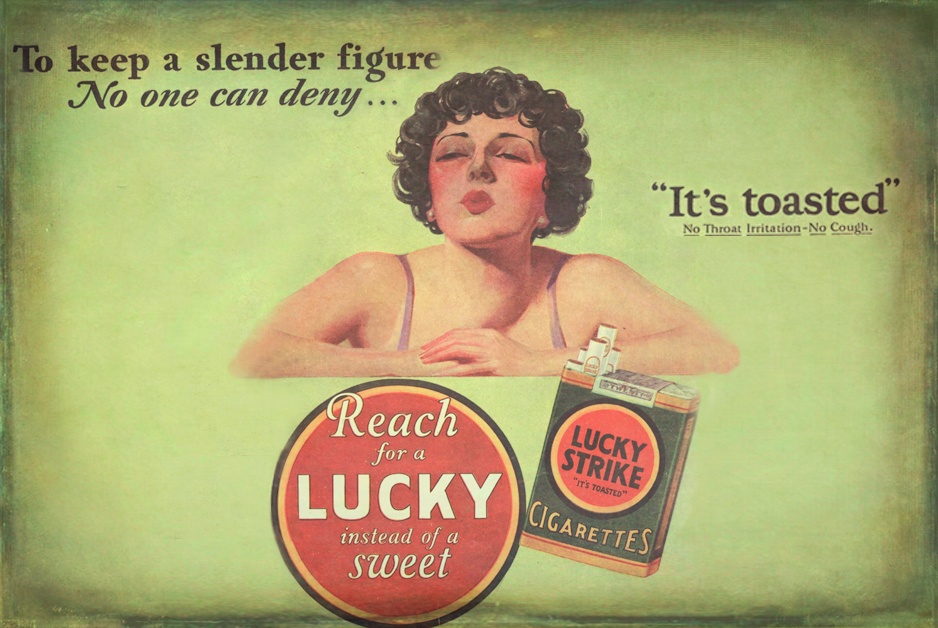 In my short lifetime (they’re all short, when it comes down to it), I was taught that eating eggs was bad for you.

I was taught that you should eat a low-fat, low-carbohydrate diet to live a healthy lifestyle. Protein only. Eat like a caveman.

Then I was taught that you shouldn’t do that.

Lucky Strike – a popular brand of cigarettes when I was a kid – once ran an ad offering themselves up as a dietary aid.

For some people, it actually works, although it’s usually the chemotherapy that does it.

Ultimately, like food, like clothing, many ideas, and ways of living, are fashionable. Then not. Then fashionable again.

What goes around, comes around.

I was reminded of this today while reading Scott Greenfield’s “The Dangerous Dilemma of Dignity.”

Scott’s post heavily quoted Jonathan Turley’s “Obergefell and the Right to Dignity,” which despite how it sounds is not a new Harry Potter title. The quote that jumped out at me, though, was this:

Both involve majoritarian values, enforced by the government, regarding what is acceptable and protectable. Substituting compulsory morality with compulsory liberalism simply shifts the burden of coercive state power from one group to another.

This is why “big government” is a curse. It is, to some extent, why overcriminalization is more of a societal scourge than crime itself. This is why the biggest right I believe the Founders meant to enshrine in the United States Constitution was the right to be left alone, and why the biggest threat to that right is democracy backed by a too-strong, too-pervasive government.

Both Turley, and Scott, miss the point to a certain extent when they worry about implied constitutional rights, emanations, and penumbras. (I don’t know Turley, but I know Scott, and I suspect he really doesn’t miss the point, and that it’s just the language of the day creeping into the writing, plus a deliberate harkening back to Griswold v. Connecticut.)

Talking about rights “implied” in the Constitution, or found and protected in the emanations and penumbras, tends to flip the Constitution on its head. There is certainly a way of reading this language correctly, which is why I say “tends to flip.” But the normal approach appears to be to think of the Constitution as granting us rights. Without the constitutional grant, the right doesn’t exist. Turley’s article enhances that when it talks about how Obergefell “appears to craft a right,” and worries about “what it portends for future rights.” Again, it’s as if rights are brought into existence through new interpretations of the meaning of the Constitution.

Scott wants to “stomp[] the crap” out of the idea of a constitutionally-enshrined right to dignity because of concerns similar to what I’m writing about here: the shifting winds of public opinion. Fashion. The recognition that what’s good for the goose in one era may, or may not, be good for the gander in another.

Scott worries about people – I worry that it’s people like me – “the dolts who argue that the Constitution ‘means what it says,'” and notes that we now struggle with the “hard rights, the ones reasonably susceptible to definition.” And, like Turley, he worries.

[C]onsider what would become of our efforts to function if a right as amorphous and meaningless as “dignity” was enshrined in the emanations and penumbras of the Constitution?

But, again, this flips the Constitution on its head. Maybe I only say this because I’m a dolt, but the Constitution which constituted the United States of America did so in a specific way, with a specific purpose, and specific limitations, using unfortunately not-quite-so-specific words.

There is a tendency in all writers to believe that they know what the mean, and they mean what they write. But the fact is that language is an imprecise tool. This is why “legalese” sounds so very odd, strained, and obscure even, to ordinary people who haven’t gone to law school, or spent years upon years studying the law. Even lawyers struggle with the law sometimes, for the same reason.

And human beings tend to have disparate values, disparate views, and disparate wants. As the Eurhythmics put it:

Sweet dreams are made of this
Who am I to disagree?
I travel the world
And the seven seas,
Everybody’s looking for something.

In a world where the accepted, if false, view has come to be that our rights to use, to get used, to abuse, or to be abused come by way of a constitutional grant, it is unsurprising that we scour emanations, and penumbras, in search of “new” hidden-but-implied rights.

I’ve written about this before.

Before begging people to actually read the Constitution (reading it really does not take all that long), I wrote:

So the only real question…is “did our Constitution constitute a government whence we obtain all our rights?” Another way of putting it might be, “Are we without any rights, unless our government gives them to us?” Or maybe, “Is it the responsibility of the Constitution, or our government, to grant us rights?”

The answer to each of these questions has to be a resounding “no.” For the United States of America is our creation. Our rights, for that reason if no other (and there are plenty of others), were ours before the establishment of the United States. We already had them — to quote President Abraham Lincoln — before the nation was “conceived in Liberty.” In fact, we gave some of them up in order to allow the government enough Power to do the things we decided we wanted it to be able to do.

I went on to talk about the different parts of the Constitution, what those parts did as far as creating a new form of government out of thin air, and ultimately noted:

Nowhere in the Constitution of the United States does it put forth the view that the government grants us rights.

Rights are ours. Always. Forever. Whether we know we have them, or not.

Because we’ve allowed the Constitution to be flipped on its ass, and even participated in the flipping, we’ve reached a point where the government dictates quite a bit more of what we can do, when we can do it, and how we can do it than would ever occur in a system of free beings protected from insurrections within, or without, by a limited government. I might want to do something – something which I feel I should be free to do because I’m not going to hurt anyone else, maim anyone else, kill anyone else, or impinge anyone else’s freedom – but somebody somewhere does not like that I want to do it. If it’s one, or two, or some other really small number of people, I may be free to exercise my inborn right to do the thing without worrying too much. I just won’t hang around with those people. But if there are enough people…

As in any pluralistic society where people are going to be forced to live in close proximity to other people who might have different views of how to navigate their short existences, there is a tension here. It is why, while like this post, I lean libertarian, I do not really think of myself most of the time as a strict libertarian. It’s why I would like to, but can’t, vote Republican, and why I hate that lately I too often have to vote for the Democrats.

Some form of government, with some power to control our behaviors, is a necessity. I used to think of it as a necessary evil, but that’s mostly because the way our government has become perverted, it is too often evil. But government isn’t necessarily evil; and it is necessary.

Just as the joy of same sex marriage is going to eventually give way to the misery of same sex divorce, the elevation of dignity to a right is going to give way to the criminalization of the exercise of other rights that the overly sensitive decide are affronts to dignity. And even if you are on the good side now, bear in mind that the whims of the majority shift quickly, and you may well find yourself in the undignified position of being on the wrong side later.

But this is true only because somewhere we’ve gotten the idea that each of our “rights” is to be backed by governmental power. After all, the government granted it, yes? So it’s up to the government to protect that which it has granted, and to ensure that someone can exercise it without having that right impinged by the vagaries of real life. When we accept that, then if government backs the majority, as it will tend to do, then Scott is correct, and your rights are like shifting sands; hardly “unalienable.”

This is why I fight for decriminalization. This is one reason (though admittedly not the only reason) that I say you should not call the cops. You hear a neighbor fighting with her husband, or his wife, or (now) married partner? So? Fighting is not illegal. Battery is illegal (probably more than it should be). Maiming someone is illegal. Murder is illegal. But I’ve represent too many people who were arrested because some over-concerned neighbor called the cops over a loud argument. The cops show up and some angry person – remember? there was an argument in progress? adrenalin might be a little high? – gets arrested because he (it’s usually, but not always, the “he”) did not “calm down” on command. That’s fucking contempt of cop right there.

Our government was not constituted to be either our nurturing mom, or our over-protective dad.

Our government was constituted to

form a more perfect Union, establish Justice, insure domestic Tranquility, provide for the common defence, promote the general Welfare, and secure the Blessings of Liberty to ourselves and our Posterity.

Our problem is that we’ve forgotten – unfortunately possibly too long ago for us ever to get back to it – that it was constituted to do this with a limited amount of power. As I noted elsewhere (linked above, but re-linked here so you don’t have to hunt):

I went on to note:

Of our rights, the Constitution has nothing to say.

Except, of course, that certain ones of them may not be impinged even by the exercise of powers granted the government – and this was added in the form of amendments, to placate those who worried that the government would, despite the protestations of the original drafters of the Constitution, and the desires of all the People, outgrow the limits to which they had intended it was cabined.

Your rights? They’re unalienable. You can agree to give them up in the interest of furthering society as you see fit.

But I’d prefer to decide on my own diet. Understanding the limits of constitutional power granted to the government, and recognizing that my rights are not something merely granted to me by that government, is critical to that. Without this, we all end up eating whatever the party in power, cowed to some extent by the majority, decides to shove down our throats.