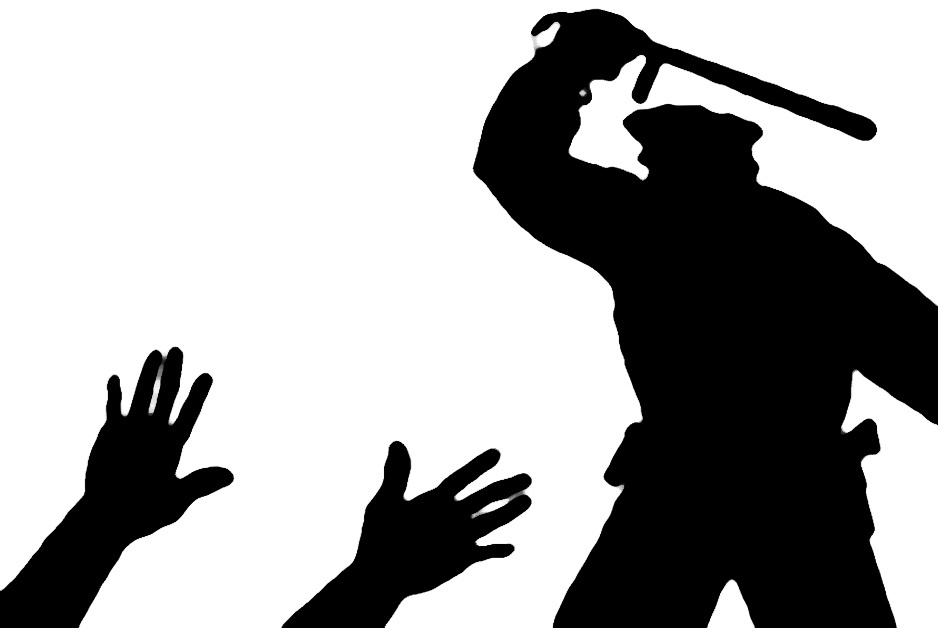 Disrespect Me, and I Will Fuck You Up (Update X2)

In the still-vigorous wake of The Disaster Known As Ferguson Missouri, a “professor of homeland security” — one of those Orwellian titles created after the United States decided that an act of terrorism by foreigners required the government to declare war against its own citizens in order to keep them safe — warns us not to challenge cops.

It’s not the police, but the people they stop, who can prevent a detention from turning into a tragedy.

This piece of claptrap — known in polite circles as “bullshit” — reminds me of the way Scott Greenfield semi-sarcastically characterizes the near-daily staccato of police brutality:

Let’s connect dots, shall we. Cops: hand injuries. Guevara: facial contusions. And charges are: two counts of second degree assault. You probably thought I was kidding whenever I wrote about defendants being charged with assaulting cops’ fists with their faces. Nope. It happens. It happened again here.

Yet Sunil Dutta, the aforementioned Orwellian Law Professor, who happens to also be a 17-year veteran of that highly-esteemed and never-ever accused of being brutal, corrupt, or anything-but-wonderful Los Angeles Police Department writes to remind us that, [1]But, hey, that’s just Los Angeles law enforcement culture, man.

Here’s the bottom line….Don’t argue with me, don’t call me names, don’t tell me that I can’t stop you, don’t say I’m a racist pig, don’t threaten that you’ll sue me and take away my badge.

And if you do those things? If you argue…if you call him a name…if you say that the cop cannot stop (by which I think he means “detain,” but I’m not sure) you…if you call him a racist pig (again, a name)…or threaten to sue and take away his badge…

[You could] get shot, tased, pepper-sprayed, struck with a baton or thrown to the ground[.]

That’s right. This “professor of homeland security” wants you to know that if you hurt a cop’s feelings, or otherwise fail to show what the cop considers to be the proper respect, you will — apparently justifiably in Dutta’s eyes — be fucked up. It’s a twist on the old children’s rhyme:

Batons and guns may take your life, if somehow your words hurt me.

Dutta is well aware that officers aren’t always in the right.

I know that some officers engage in unprofessional and arrogant behavior…

[Y]ou don’t have to submit to an illegal stop or search. You can refuse consent to search your car or home if there’s no warrant (though a pat-down is still allowed if there is cause for suspicion). Always ask the officer whether you are under detention or are free to leave.

Of course, there’s nothing to keep the cop’s feelings from being hurt in that situation —— nothing to stop the cop from feeling disrespected — in which case you would (apparently justifiably, remember?) be fucked up. I mean, weren’t two of the no-no’s on Dutta’s list 1) arguing with the cop, and 2) telling the cop that the cop can’t stop you?

Police are legally permitted to use deadly force when they assess a serious threat to their or someone else’s life.

And therein lies the problem. These days, exercising your rights under the United States Constitution is seen as “challenging the cop” in a way that is deemed — and not just by professors of homeland security — as making you “a serious threat to their or someone else’s life.”

Anything that happens to you after the cop’s feelings are hurt, whether it leads to death, maiming, or just a rough invitation to spend the night in jail, and possibly the need to lay out some cold, hard cash to defend yourself against a charge of resisting arrest, is all your own fault.

Officers don’t overreact; they just react justifiably under the circumstances confronting them at the time you were deemed to have been a disrespectful, serious threat to their or someone else’s life.

You know, like what’s happening in Ferguson, Missouri, where people are stupidly insisting on exercising their unalienable rights to assemble and protest against their government — an unalienable right so unalienable that the United States Constitution set it up as the First Amendment meant to ensure that government (not the People) did not overstep its bounds.

Instead, in Ferguson, you have government drawing up new — and apparently ever-changing — bounds. Despite the clear statement of the First Amendment allowing people to congregate to protest, we get Missouri Highway Patrolman and Ferguson Savior Ron Johnson,

“We are not going to let groups congregate and build into larger groups [despite the Constitution expressly saying government cannot prevent this] because that’s what causes problems,” Johnson told reporters in a press briefing Monday night, in response to a question from The Huffington Post. “Because what happens is, the peaceful protesters gather, and the other element blends in. Now they blend in, and that’s what’s been causing us some issues. So by allowing them to walk, that’s not going to let the other element blend in and define this group.”

Any of the People, including reporters, who foolishly think the First Amendment will save them when they overstep those newly-drawn and unconstitutional government bounds, are subject to being tear-gassed, shot with rubber bullets, or wooden discs, and arrested.

Despite the claims of police about “the other element,” and despite all the pictures journalists have managed to take in between being arrested, I have seen only one single solitary picture of a possible Molotov cocktail being thrown. [2]And I can’t tell for sure if that was a Molotov cocktail, or a gas canister being returned to the police, as I have heard some protesters were doing. I have not seen any evidence of anyone having shot at police (other than the unsubstantiated claims of the police). You can find at least 73 pictures here, but you won’t find anyone committing any acts of violence, except acts of violence committed against citizens by law enforcement officers dressed up as soldiers. [3]One picture purports to show people trying “unsuccessfully” to light a Molotov cocktail. I’m not sure how you unsuccessfully light a can of gasoline, but that’s what it says. It doesn’t appear the police knew about this unsuccessful attempt. This, despite “crowds who threw” Molotov cocktails. In addition, you’ll notice the story itself talks about the police clashing with protesters, not clashing with people trying to light Molotov cocktails. Numerous protesters subjected to police attack state that they did not see any Molotov cocktails, to which the police responded, “Well, it was happening behind you. That’s why you didn’t see it before we fired on you.” Frankly, I no longer trust the authorities — or mainstream media — to tell the truth. Show me the pictures, or it didn’t happen.

An average person cannot comprehend the risks and has no true understanding of a cop’s job. Hollywood and television stereotypes of the police are cartoons in which fearless super cops singlehandedly defeat dozens of thugs, shooting guns out of their hands. Real life is different. An average cop is always concerned with his or her safety and tries to control every encounter. That is how we are trained. While most citizens are courteous and law abiding, the subset of people we generally interact with everyday are not the genteel types.

This is different from the old days, when cops thought their job was to protect and to serve. None of them ever worried about their safety then. But then, they were better able to handle criminals because they had not grown fat and lazy from eating doughnuts all day. And they didn’t have really cool toys like sonic canons, Tasers, and laws that allowed them to beat the shit out of, or execute, whomever they wished, whenever they wished, without having to worry that some dumb-ass judge was going to be disturbed by that.

The People are getting sick of it. Even 90-year-old Hedy Epstein, a frickin’ Holocaust survivor, says, “We need to stand up.” Hedy’s reward for doing so?

Hey, at least she didn’t have to get “shot, tased, pepper-sprayed, struck with a baton or thrown to the ground” for the clearly-disrespectful smirk on her face while they were arresting her.

The six corporations that own 90% of all the media in America, of course, haven’t yet grown quite as tired as the People of Ferguson — and those who sympathize with them. From around the world. (China, Iran, and Russia are said to be downright gleeful over how U.S. law enforcement is handling the situation, though.) If you watch them on television, you will hear all about protesters appearing night-after-night with Molotov cocktails. You won’t see pictures of that, but you’ll hear about it. After all, it’s the bullshit story being offered up as justification for tear-gassing the People for doing what the First Amendment reminds government they have an unalienable right to do.

And mainstream media, including CNN, spreads this bullshit far and wide, as if is somehow the fertilizer of freedom, despite seeing one of their own reporters harassed in the middle of a live broadcast!

CNN isn’t the only target of non-overreacting law enforcement officers handing out the “courtesy, respect and professionalism” Dutta says community members deserve. Getty photographer Scott Olson was also invited to check out some cool handcuffs, and a trip to the jail. A student reporter for Argus Radio, live-streaming the protests, was threatened by an officer who ordered him — courteously, respectfully, and professionally — to “Get the fuck out of here!,” or the officer was going to shoot him. Yesterday and today, six more journalists were arrested, bringing the total so far — according to CNN — to eleven. The Officer Allegedly In Charge of Policing Ferguson has indicated that more journalists may be arrested if the police aren’t sure they are journalists.

Because, after all, if they aren’t journalists, then they can only be in the midst of looting, and throwing Molotov cocktails.

In the long run, Ferguson is not going to change anything in any positive way. The United States Constitution will be further eroded, with no complaints from the media, nor — after the citizens of Ferguson are either suppressed, or just grow tired — of the People. Police will realize that they can completely shut down any town, any time they want.

And any disrespectful son-of-a-bitch who tries to say anything about it will be fucked up, without anyone really batting an eye.

Because it’s not the police, but the People they stop, who can — by their complete obsequious submission to the abrogation of their constitutional rights — prevent a detention from turning into a tragedy.

Update: I’m not the only one to recognize the inanity of Dutta’s threat. Ken White at Popehat has this offering.

Update #2: I should have known the machine-gun of blogging would have gotten a post out on this, too! Check out Scott Greenfield’s take on it.

Home » Criminal Defense Blog » Police State » Disrespect Me, and I Will Fuck You Up (Update X2)