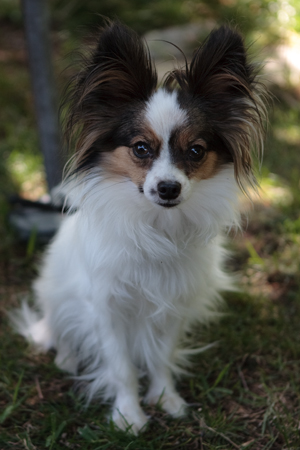 What a difference a dog can make. Everyone knows about dogs being used in police work, although some (rare) courts are now requiring proof they actually can do all that is claimed. (Update 9/26/2016: link broken) And they’ve already proven their usefulness in getting young, scared children to tell their stories to prosecutors — and even helping them testify. I have no quibble with that when it’s done outside the courtroom.

But now, in New York, and possibly other places, dogs are being allowed to testify…. Haha, I’m kidding about that part. We don’t yet have Lassie falsely telling jurors that Timmy fell down the well.

Instead, since the law doesn’t allow children to take their entire families into the witness box with them to help them testify, dogs are being used instead.

There’s an additional benefit, of course. Not everyone’s family is charming and good-looking. But who can resist a cute little doggy who is only expressing concern for the poor little victim? Well, maybe someone can, but he doesn’t get called for jury duty, so he doesn’t count.

And who can complain, except for some big, bad, mean defense attorney whose job is to put big, bad, mean rapists back out on the streets? I mean, come on!, a cute little doggy trying to comfort a poor distressed little girl doesn’t risk swaying the jury at all!

So why not just let their families go into the witness box with them to help them testify?

Fair trial for the accused. That’s why.

Don’t get me wrong. I love dogs. I have two of my own and while I try not to play favorites, who can possibly not just adore Tuvia, a.k.a. “Silly Willy”?

But that’s just the point. The majority of people not only adore and love dogs, especially if they are cute and appear to be doing something “heroic,” like rescuing a family, or comforting a poor little raped and abused child, but the presence of a dog has unconscious, profound effects, inspiring them to bond with those accompanied by dogs.

Several studies have been conducted to demonstrate the physiological effects of animals on people. Eighteen humans and eighteen dogs participated in a study conducted by Odendaal (2000). The purpose of this study was to examine the physiological basis for affiliation behavior (behavior that is mutually beneficial) between humans and dogs. Odendaal measured the mean arterial blood pressure and six neurochemicals related to blood pressure (endorphin, oxytocin, prolactin, phenylethylamine, dopamine and cortisol) before and after conditions of interactions and quiet book reading. Participants were divided into two groups: pet owners and their dogs in an experimental group and individuals with unfamiliar dogs in a control group. In the interaction-with-dog condition, all of the neurochemicals increased significantly (p<.05) except cortisol, with both the humans and the dog participants. These neurochemicals are associated with positive affiliation behavior. Therefore the human and dog participants increase in affiliation behavior was indicated by the neurochemical changes. According to Odendaal’s report, both the human and the dog participants showed deceased cortisol. Stephanie Walters, “The Effects Of The Presence Of A Dog On The Social Interactions Of Children With Developmental Disabilities,” p. 3 (2005).

Cortisol, for those who don’t know, increases as a response to stress. “Affilation behavior,” also known as “affiliative behavior,” is behavior that encourages social cohesiveness, altruism, empathy, and a desire to help others. So the reaction of the test subjects — humans — to the dogs was that stress was reduced and their propensity to bond was enhanced.

Dogs have all kinds of positive effects on people, including increasing productivity at work, making people friendlier and better able to communicate, and at least one psychologist argues that people wouldn’t even exist if it weren’t for dogs.

These positive effects of dogs explain why dogs are increasingly used to assist persons suffering from such things as anxiety, depression, and trauma. The dogs don’t just aid the affected individuals directly by interacting with them. They also assist indirectly, by enhancing the ease with which a therapeutic — a helpful — relationship is established between the affected individual and a therapist.

That’s why having the dog in the witness box with a testifying witness is actually worse than if we allowed their families to sit up there with them, soothing and coaching them. Families don’t universally have this same impact upon juries, whereas numerous studies have shown that dogs do. That’s why, after all, the use of dogs in therapeutic settings is on the increase. Dogs — and sometimes other pets, such as cats — are increasingly prevalent even in “nursing homes” and assisted living centers, because of both the above-noted direct and indirect effects they have on people.

So how does that work for the accused person, as he or she sits at the defense table? Not only is the jury being subliminally influenced by the dog to feel empathy for and bond with the testifying witness, but the accused person is automatically excluded from that relationship by virtue both of the physical separation from it, and by the “fact” that that poor testifying witness is up there in that box, needing the jurors’ help, because of the horrible things he did.

It’s no wonder at all to me that prosecutors love this.

UPDATE 9/26/2016: MULTIPLE LINKS IN THIS ARTICLE HAVE BECOME BROKEN SINCE IT WAS WRITTEN, AND HAVE THEREFORE BEEN REMOVED.