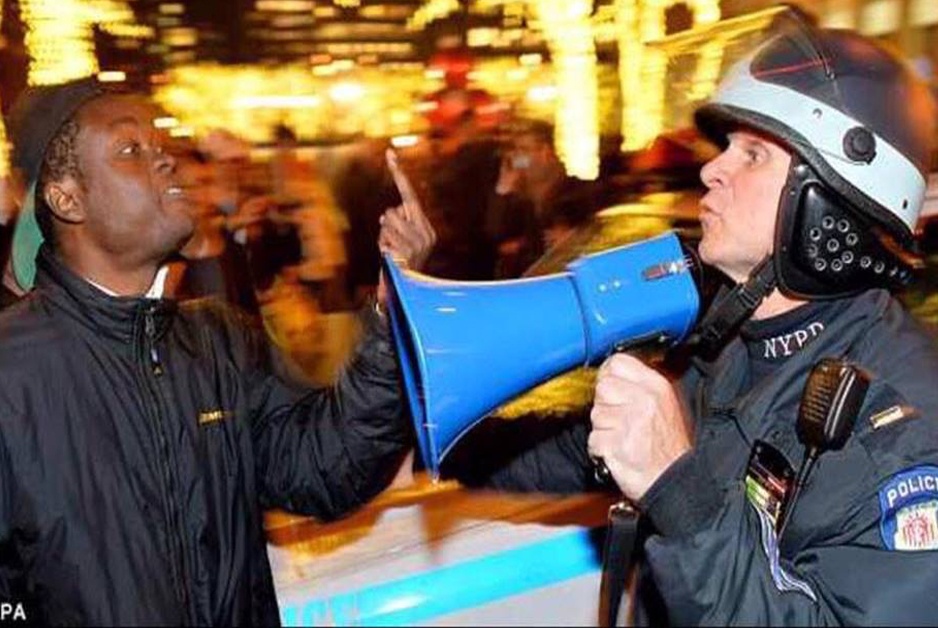 The post was to be all about how, were I still in the Navy, and decided to protest how our leaders talked about us by turning my back while in uniform, I would have been given a gift card as an apology, and told to run off to Mike’s Brewery to join the boys for a beer on the sidewalk.

#NYPD officers drinking in public with open containers of alcohol on the sidewalk after the #NYPDFuneral. pic.twitter.com/OTLl5mXSQ1— Bipartisan Report (@Bipartisanism) December 27, 2014

Of course, that wouldn’t ever happen: first of all, I’d be punished for such behavior by the commander; second of all, if I stood on the sidewalk with the boys for a brew – especially in New York – I would have been arrested, since it’s against the law. In fact, in some places, cops will arrest you for drinking in a bar. Of course, that would almost always – but not always – only happen if I were black.

In New York, after all, a cop might arrest you for drinking ice tea in public, or just for being in public, outside of your own house.

And, yes, I get that it appears pretty clear that cops think they’re above the law. Despite disgracing their uniforms by turning their backs in an illegitimate form of protest, they think non-police-officers – who, unlike those police officers, actually have a constitutional right to protest – should be punished for protesting. They have no problems with their union-sponsored protest-in-uniform against their “civilian” bosses, but gods help the officer who wears his uniform to protest for something the union doesn’t approve.

But this morning, I decided that’s not the post I’m going to write, after all.

As I wrote yesterday, I’ve been thinking about the two police officers who were recently murdered by a mentally-ill man in New York recently. In particular, I’ve been focused on the rhetoric.

I’ve thought about my own rhetoric, which is probably confusing to readers over time. After all, sometimes I’m ranting – raving, even – about cops. Other times, even those who worship the police think I sound almost sane.

Ecclesiastes teaches, there is a time to every purpose under the Heavens.

Bill noted that in his eulogy to Officer Rafael Ramos, one of the recently-assassinated officers mentioned above.

It was that eulogy that got me thinking. I don’t know what Bratton exactly intended with those words about there being a time to every purpose. There has been some who use those words to say that the protesters should stop protesting. (Edit 3/21/2017: Link broken/removed.) After all, previously, it was just a lot of unarmed black people being killed. Now, it’s two cops.

See what I mean about rhetoric?

The rhetoric itself is not really the problem, though. After all, rhetoric not only has its purpose, and place – in fact, it is pretty much applicable to every time, and every purpose, under the Heavens – it is virtually unavoidable.

Rhetoric is the art of speaking or writing to the public–and not always a friendly or familiar public. Rhetoric is the art of persuading others that our course of action is a correct course of action. The art is in knowing our audience, in shaping our voice, audible or written, so that our audience clearly understands our message and is persuaded–maybe not always persuaded to act, but at least persuaded to acknowledge that another point of view is possible.

The real key here is the “knowing our audience” part. As Bratton, again in the eulogy, put it, not knowing one another is a big part of what’s caused this major rift between (oh, say) the police and a now-large-and-vocal number of non-police citizens here in the United States.

Maybe that’s the reason for the struggle we’re now in–as a city, as a nation…

Maybe it’s because we’ve ALL come to see only what we represent, instead of who we are.

We don’t SEE each other.

We don’t SEE each other.

Bratton is wrong, though, about the idea that “WHEN we see each other, we’ll heal.”

Seeing each other is just the beginning. It may be the beginning of healing. It would be nice if it is. But it kind of depends on what happens when we do see each other.

As an example, in that same eulogy, Bratton said about Officer Ramos,

He represented the public safety that is the foundation of our democracy.

It may be difficult to find the thread in what I’m writing about today. To some – even to myself! – it could seem that I’m going back and forth from a potentially-inflammatory use of rhetoric, to complaining about the misuse of rhetoric.

In one way, that’s exactly what I’m doing. But what I’m trying to show is that rhetoric is a tool. Buried above in the definition of rhetoric was the idea of showing “that another point of view is possible.” Our rhetorical choices can certainly do that. Rhetoric can be quite useful to paint a picture, to characterize.

But rhetoric can get in the way of having a real conversation.

And that – bringing me back to another point of agreement with Bratton – happens most when “[w]e don’t SEE each other.”

Here’s the part, though, where I might lose some of the audience which I am trying to reach: it’s the police who have to make the first move towards de-escalation. Because, frankly, in addition to rhetoric, there are facts. And the facts coming out right now are showing police in a downright ugly way. Police officers turning their back on an elected official – an elected official to whom they ultimately answer in the chain of command – sounds just a little too much like insurrection: “an act or instance of revolting against civil authority or an established government.”  Call it “freedom of speech” all you want. That won’t make it so.

Nor will it help to claim that Mayor de Blasio, or the protesters, have “blood on their hands.” Think about it, folks: if protesters calling for accountability, and de Blasio making truthful statements about the realities of being black in an encounter with the police – and “allowing” the protests (which are actually not “allowed,” but “protected” as a basic constitutional right) – means these folk have blood on their hands, then what does it mean when rank-and-file officers engage in police brutality, excessive use of force, shooting unarmed civilians, and their bosses do nothing but exonerate them? 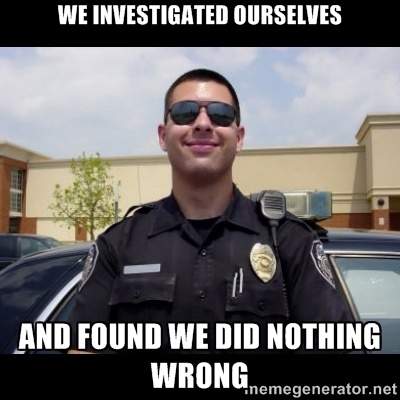 But what we don’t want is for the police, in the process of trying to arrest criminals, to get so easily confused about who is, and who is not, a criminal. What we do not want is for police officers to mistakenly believe that because they are authorized to use appropriate force against criminals, they are therefore also allowed to use inappropriate force against non-criminals.

Protesters calling for accountability, and mayors in touch with reality who run on a platform of reforming the police to bring about that accountability, are not criminals. Wanting to improve something is not “fighting.” It’s absolutely not assassinating. A crazy person killed two police officers; you’d have to be crazy to think that means the protesters, and Mayor de Blasio, are responsible for his death. And, again, if somehow they are, then how many police chiefs hands are covered in the blood of innocent non-police-officer citizens?

Yet somehow, this constitutionally-protected non-fighting is serious enough for the police union to issue a declaration of war.

What I’m saying here is not rhetoric: those are facts. Similarly, that more than 1,000 U.S. citizens were killed by police in 2014 is a fact. That this may be a thirty-percent increase over the year before is not a proven fact, but appears likely. [1]Figures for 2013 by the same organization using the same methodologies for counting are not available. But – whew! – 115 officers died in the line of duty during that same time period, and less than half of those were the deliberate acts of criminals intent on taking those officers’ lives. [2]That number includes Officer Ramos, and his partner, Officer Wenjian Liu, as well as three police officers – two dead by gunfire; one by accident – since their deaths. Also a fact.

It is these facts, and not mere rhetoric, which are responsible for protesters, and for Mayor de Blasio’s recognition that there is a problem. Because, my friends, this is also a fact: we do, indeed, have a problem. Too many police officers think it’s their god-given right to ignore the laws, whether it is the lowliest of laws against drinking a beer on a sidewalk, or the weightier laws against killing people, without trial, and on “evidence” that would never provide probable cause – let alone reasonable doubt – if invoked by a non-police-officer citizen.

This is why, again, Police Commissioner William Bratton gets it right:

Police Commissioner Bill Bratton called frustration in New York and across the country surrounding policing the “tip of the iceberg” during an appearance Sunday on NBC’s “Meet the Press.”

As the cause of that iceberg starting to heat up, it is up to the police to start a real, honest, conversation about this with the People.

This is not a time for anyone to be turning their backs on anyone.