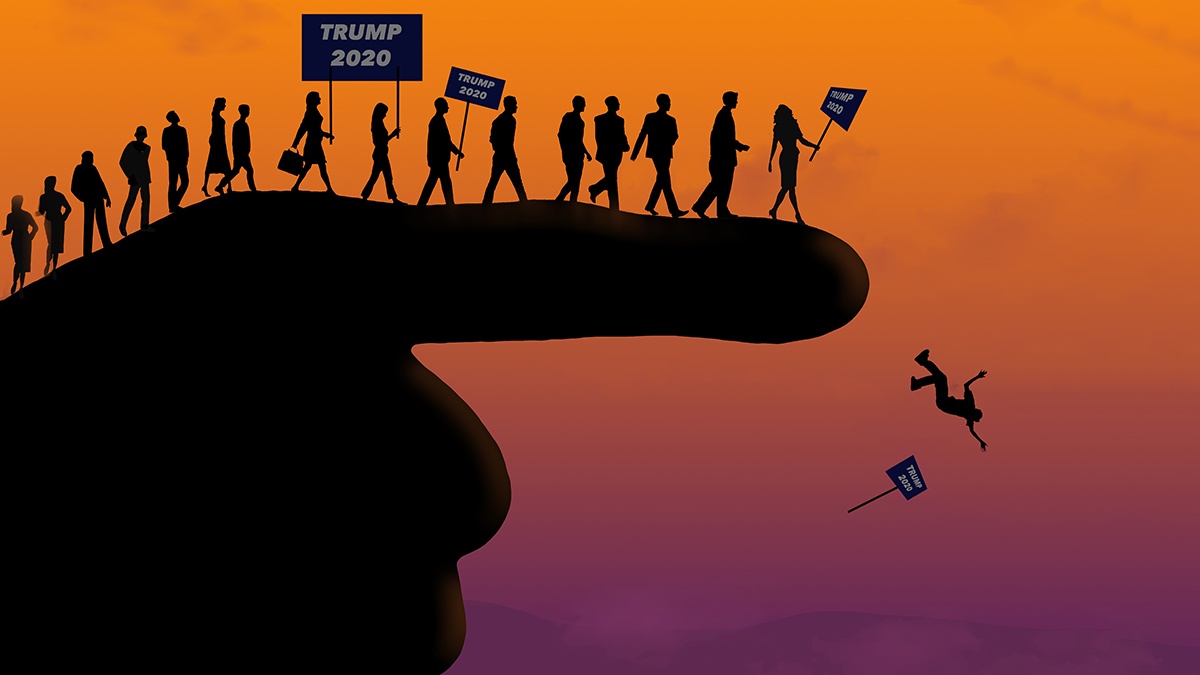 Although I have strong political opinions, and I used to blog about them regularly on a website I created called Unspun™, I don’t like doing strictly political rants here. And I’m not really going to break that rule too much right now, although I do want to talk about the Herd Mentality.

But we’re going to consider it mostly in the context of criminal defense. Because, after all, that’s what I do.

Whether you think Trump is a brilliant leader, or merely a lucky idiot, you have to admit that he knows how to move the herd. Especially the unthinking base herd that constitutes his base. And if record voter-turnout this year is any indication, he’s motivated the rest of us, too!

Recently, despite the massive failure to confront the coronavirus early, forcefully, and in a way that could have saved tens of thousands of lives (if not more), Trump said,

Well, this is partially true. I was at a vision care center last week, and a rather ignorant individual — judging by his understanding of the rules of the place, and his comments — told me that we needed to develop a herd mentality. When I told this to Bunny Chafowitz, she said, “He was parroting Trump.” That was the first I heard about this, as I’ve been avoiding the #fakenews lately.

(Not really. Avoiding #fakenews, I mean. I do read Faux — I know, I know, some of you southerners pronounce it “Fox” — News, as well as a bunch of others.)

As I’m sure every #fakenews outlet except Faux News has pointed out, “herd mentality” does not mean what Trump apparently thinks it means.

James Madison, one of our long forgotten — and, if remembered, probably now discredited by the asinine Progressive Left — founders of our nation, rightly stated,

— Jeffrey Rosen, “America Is Living James Madison’s Nightmare: The Founders designed a government that would resist mob rule. They didn’t anticipate how strong the mob could become.”

This is because of “crude and ambitious politicians who had played on their emotions.” In other words, “Republicans.”

Incidentally, note how truly hypocritical that label has become as applied to the contemporary party of the same name. It once meant “one who thinks a commonwealth without monarchy the best government.” Today, it denominates the party which deems Citizen Trump is King.

In our day, that includes neighbors and newspapers, police and prosecutors, judges and justices. The mob is, frankly, everywhere. Except where we are.

And what I mean by that last statement is that when “others” ignore the law, they are criminals. And when we — and the cops, prosecutors, and judges with whom we align ourselves — ignore the law, we are “truthseekers.”

Á la George Orwell, none of these words mean what people think they mean anymore. The Herd Mentality has taken over, and both the Left and the Right are busily redefining things.

In the political realm, it’s easy to see. But in the more subterranean political realm — that is, the judiciary — obfuscation rules: “qualified immunity” is used to describe what used to be called “absolute immunity,” to give you just one example. “Totality of the Circumstances,” “probable cause,” and “reasonable” are others long mutated and mutilated by enrobed politicians.

And the most obvious place the law encounters herd mentality is, of course, the jury.

The Power of Social Proof

Juries are supposed to rely upon evidentiary proof to reach their verdicts. Too often they rely instead upon social proof: the decisions of other jurors with whom they are deliberating.

Daniel Pink, in a Masterclass in which he teaches Sales and Persuasion, explains “social proof.” Pink tells the story — derived from a study detailed in “A Room with a Viewpoint: Using Social Norms to Motivate Environmental Conservation in Hotels” by Goldstein, Cialdini, and Griskevicius — of a hotel trying to convince guests to reuse their towels.

Initially, the hotel put placards in the room suggesting people reuse towels because it’s good for the environment. About one-third of people did so; two-thirds did not.

So they experimented with changing the wording. They added to the message that a majority of people who stayed in the hotel — upwards of 75% — reused towels. Suddenly, 44% of people actually began reusing their towels.

Then, they tried again. They placed placards with the environmental message. But they added that 75% of people who stayed in that very room reused their towels. Towel reuse again went up, to 49%.

As Pink points out, when we’re trying to decide what to do, we look for evidence about how things are done “around here.” We look to how other people are doing it.

This is social proof, which turns out to be very persuasive.

Birds Do It, Bees Do It, Even Jurors in Their Seats Do It

Unified groups can accomplish great things. For birds, flocking improves getting around while reducing fatigue, as well as making it easier to avoid, or defend against, potential predators. For bees, groupthink allows them to construct hives to store honey, thus ensuring survival through the winter’s shut-down of their favorite outdoor eateries.

It’s also why, for the most part, democracies created some of the most successful civilizations on Earth.

Democracy is the only political system that guarantees people political and civil liberties and the right to political participation. No other form of government has proved to be so successful, so humane and so conducive to development.

— Federal Ministry for Economic Cooperation and Development, “Democracy: the most successful form of government there is”

A love of democratic ideals is why from 1977 to 2017, democracy as a form of government has grown around the world.

But human groups can also do terrible things. It comes back to issues of “social proof” and herd mentality mentioned above.

Juries are not immune. They can get things phenomenally wrong. One study by Northwestern University says juries tend to make the wrong decision in one out of every eight cases. Then there are the 2,551 known exonerations in the United States since 1989. That doesn’t include more than 1,800 (mostly blacks) cleared after 15 large-scale police scandals.

Of course, the herd mentality amongst jurors isn’t to blame for all those. When police deliberately frame people, how is a jury to know? (Hint: When officers testilie, jurors can work even harder to avoid the tendency of other jurors to trust police over other evidence.)

The main point here is that good ole groupthink — the herd mentality, mob rule, or whatever other name you want to ascribe to it — works in people just as it does for the birds and the bees. We’re not talking about the facts of life here: just one fact of life. Those who don’t fall in line meet with resistance; those who don’t blend in become targets.

The tl;dr diminution of this section’s disquisition is this: herd mentality doesn’t mean what Trump thinks it means; neither does herd immunity.

Many medical professionals hate the term herd immunity, and prefer to call it “herd protection”, Buckee says. That’s because the phenomenon doesn’t actually confer immunity to the virus itself — it only reduces the risk that vulnerable people will come into contact with the pathogen.

— Christie Aschwanden, “The false promise of herd immunity for COVID-19”

As Philip Bump of the Washington Post notes, this misunderstanding is more important than the misuse of “herd mentality” by the King.

But do you know what else keeps vulnerable people from coming in contact with the pathogen? You know what does protect the herd?

If we’d had a little herd mentality about masks early on, we might all be better off right now. And quite a few more of us would still be alive.