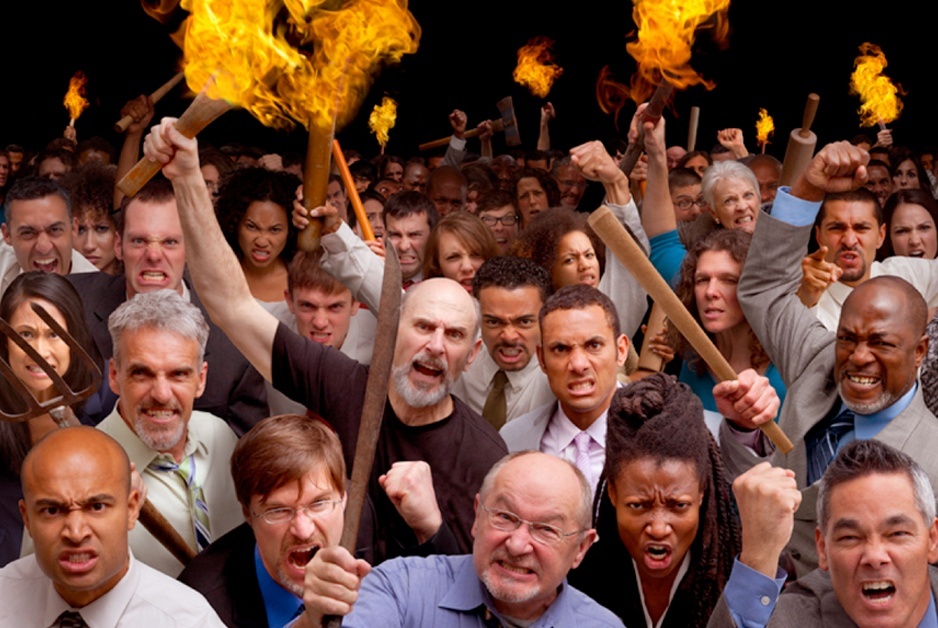 A couple days ago, I quoted from New York Police Commissioner William Bratton’s eulogy for Officer Rafael Ramos, who was recently assassinated by a mentally-ill individual because Ramos was wearing the uniform of the institution for which Ramos worked: the New York Police Department.

I started that post by talking about another post that I’d thought about writing. Blogging – for me, anyway – is funny that way. You start out with one idea, and as you write, it transmogrifies; somehow the post itself magically becomes something different than what you thought it was going to be. It reminds me of certain writers I’ve heard who talk about how they can’t wait to see what the characters in their books – the books they are writing! – will do next.

It happened again today. I started with a post titled, “You Were Told,” about all the warnings we’ve had through the years that the police force itself was transmogrifying into something horrifying, something different than we thought it was going to be, and how we’ve failed to do anything about to stop that transmogrification.

As the cause of that iceberg starting to heat up, it is up to the police to start a real, honest, conversation about this with the People.

This is not a time for anyone to be turning their backs on anyone.

Perhaps partly because of the essential need I see right now for some kind of rapprochment, if we are to ever have that conversation, today’s post steered itself away from a modernized Niemöllerian reminder toward this: a reminder of the difference between calling for changing an institution, and insult inflicted through the insouciant conflation of the individual with that institution.

Many of us, if not most of us, have a tendency to want things to be – if you’ll pardon the expression – “black and white.” Call it “on or off,” if you wish. “Either/Or.”

But that is merely the beginning of the stages on life’s way.

Too many of us, though, are mired in the muck of thinking that only allows for binary positions. Ironically, those who lately seem most inclined to think that way are also those who, for society’s sake, should be doing it the least often. For police officers, in particular, the fad of the last two decades or so appears to be a completely binary “us versus them.”

Unfortunately, “us” is police – and from what I can see, not just any police, but the worst sort: the head-bashing, killing sort – and “them” is everyone with a head that needs bashing, or a life that needs taking. In the minds of such officers.

This binary thinking makes police reform a very difficult subject to broach. The police unions – whose leadership these days most resembles the leaders of unions that have given us such cultural icons as “Jimmy Hoffa” – will brook no criticism of “the police.” Anyone who does criticize the police is viewed as even more “the enemy” than the “them” the police have, of late, traditionally opposed.

But criticism of “the police” is mostly not what the union bosses, and scared, or schizoid, individual hardline officers and their supporters say it is.

William Bratton, pondering the prime mover of our problems in the above-mentioned eulogy, said,

Maybe it’s because we’ve ALL come to see only what we represent, instead of who we are.

Ignoring the internal contradiction that Bratton just came off a riff wherein he was lauding Rafael Ramos for what he represented, we should pay attention to this point.

Or maybe we shouldn’t ignore Bratton’s internal contradiction. Maybe therein lies the actual problem: for too many, there is an failure to recognize a distinction between an institution represented, and an individual who represents.

When I originally wrote the last sentence, I wrote that it was “an inability to recognize a distinction.” But that isn’t really true. The distinction is there, and if we pay attention, we can recognize it. Maybe it requires a little more thought than we normally give it, because you really can’t see an “institution” – in this case, the institution we call “the police.” You can only see individual police officers. Police officers exist in the three-dimensional world that presents itself to our eyes; “the police,” as an institution, is a social construct. The former are real entities; the latter, essentially a concept, or even a collection of concepts. “The police” is made up of police officers, socially-and-legally-enforced rules, and laws, and probably a whole bunch of other things I’m not inclined to ferret out right now.

And some of you are sitting there asking yourselves, “WTF is he talking about?”

It is the institution of “the police” that “protesters” – as a group – aim to alter. Sure, to the extent that is done, individual police officers’ behaviors will (one hopes) change. But when they don’t, it will be up to the reformed institution to determine punishment, or at least to determine not to stand in the way of another institution – the legal system – from punishing them.

Within the institution we refer to as “the police,” there are those who would bash our heads at a hat drop, or a dare dance, or some other “furtive movement.” There are also officers who would bag some groceries for the poor, or counsel a kid, or perform some other positive act.

And if you really want your head to explode over how complicated this can get? Read the article about the police officer who supported Darren Wilson, and also hugged a crying black child during a “Ferguson protest” in Portland, Oregon.

The bottom line here is that individual human beings are not the institutions they help comprise. And protest targeted at the institution – I could write another post on the difference between a protest, and an attack – is not a protest targeted at any individual police officer. Even as regards the Darren-Wilson-Michael-Brown-fueled protests, the “real” target is not Darren Wilson: Darren Wilson could be indicted tomorrow (if the feds had the balls for that), and the protests would not end. The protest isn’t against some individual officer’s racism, but against the racism that infuses the institution, and has now resulted in the deaths of numerous unarmed black people, whether adults, or children.

Meanwhile, we would do well to remember that anger at, and criticism of, the institution – “the police” – is not the same as anger at individual police officers. Which is why, as Radley Balko put it,