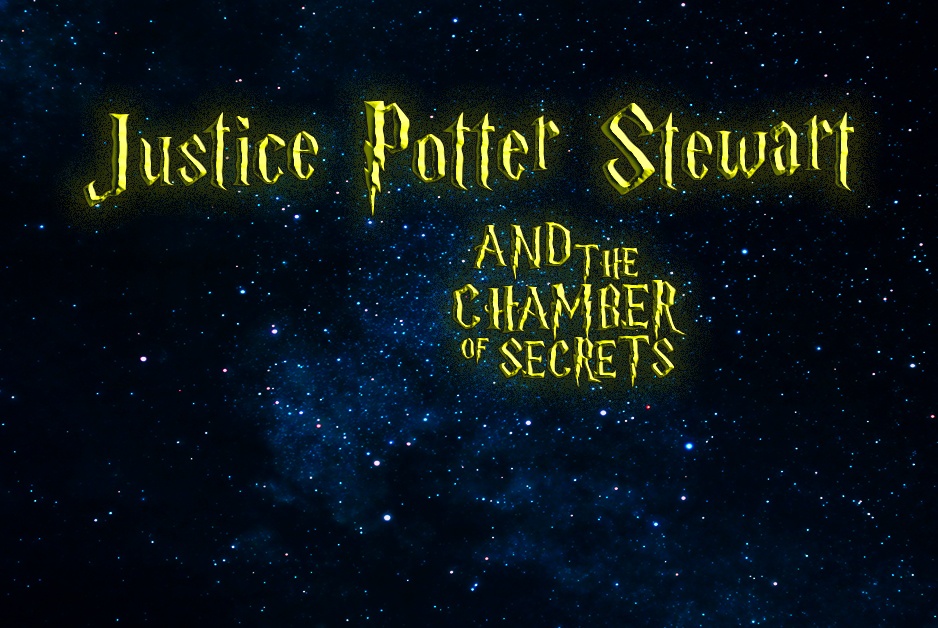 Justice Potter Stewart and the Chamber of Secrets

The motivation for the comment is found a couple of sentences earlier in that same opinion, where Stewart talks about the difficulty of “defin[ing] that which is indefinable.” [2]Id.

Scott Greenfield, in a recent post about Voldemort, [3]Not really. takes on a similar task: while not naming he-who-inspired-the-article-that-inspired-the-post, Scott tries to name that-which-is-the-root-of-injustice.

Stewart got it right. Clark — the author of the other wonderful post — basically got it right (but doesn’t clearly get why). Scott? I don’t really know. I know that I see things a little differently, and I’m writing this post because I’m trying to figure out why.

Actually, it’s not exactly right, perhaps not fair, to say that Stewart and Clark got it right, and to imply that Scott fell short. Scott addresses a particular question posed by Andrew Cohen, the writer of the article about Voldemort,  [4]Not really. Not really “about Voldemort,” that is. to wit:

Is there a story that better illustrates the arbitrary and capricious nature of our criminal justice systems today than the story of [he who should not be named]‘s just-ended online art auction? [5]The article by Cohen appears on the website for The Atlantic, is dated December 23, 2013, and contains the actual name of he-who-should-not-be-named. The alteration in the quote here is from Scott.

If you read Scott’s article, you’ll know that, while disagreeing with the pessimism of Clark’s article, Scott believes the answer to Cohen’s question is found therein. I won’t rehash that aspect of it here.

I write, however, because of this: Scott says that he cannot share Clark’s pessimism.

First, because I fear that left to our own devices, the system that will replace what we have now will be worse.  Second, because I believe that the hierarchies of which Clark speaks, the royal prerogatives that we have established and maintained, are fixable.

I take issue with both reasons. Both miss the mark. Each in a different way.

Clark had argued — which you can guess even from the title of his post, “Burn the Fucking System to the Ground” — that “the System” needs to be destroyed.

It’s unclear what system Clark is talking about; he doesn’t actually label it. At first blush, he could be talking about the criminal justice system, in which case while it might seem that he and Cohen are talking about the same thing, he would disagree with Cohen that the system — Cohen uses the plural “systems” — is “arbitrary and capricious.” Clark thinks the system is working exactly as it was designed to work. And that’s the problem.

I could keep myself up all night and into tomorrow by listing different groups of royalty and the ways they scam the system.

…except “scam the system” is a misnomer. [sic] I am not listing defects in a perfectable system. I am describing the system.

So Clark wants to burn the system to the ground, and Scott can’t get behind that because he fears what we would put in its place. Clark thinks the system isn’t broken; Scott thinks it is, and that it can be fixed.

The thing is that they’re talking past one another. Because, as I’ve said several times now, it’s unclear what “system” is being discussed — our criminal justice system? our political system? our allegedly-constitutionally-based Republic? — and therein lies the problem.

One of the reasons that I side with Clark with his “destroy the system” proposal is that I, too, have been dismissed with statements like Scott’s “I fear what we would replace it with,” or, as a commenter to Clark’s article put it:

While I agree, in the main, with this, does it not seem obvious that there is no system of government that is any better? In all existent systems, there is a hierarchy of justice, and the poor get shafted more than the rich. For values of poor and rich. The Constitution, as written, was an attempt to mitigate this trend, and while it has (as I expect they knew it would) failed, it still has provided a better system than much of the world gets to experience.

It is bad, but could be so very much worse.

But there it is. There’s the problem. The Constitution was written to mitigate the “hierarchy of justice…the poor get[ting] shafted more than the rich.”

And we have strayed far from the Constitution. Can anyone honestly say that, today, we have a limited form of government? The Constitution was written to confer certain powers upon the government, to achieve a limited purpose on behalf of the People. A prior version of the Constitution had been found wanting because it failed to confer such powers, and the government was thus completely ineffectual. But, having just come through a rough time — to be perhaps overly succinct — our Founders were still ambivalent, at best, about granting any government powers that could be used to the detriment of the rights of free individuals. A great debate raged over this between groups that came to be called “Federalists” and “anti-Federalists” — groups largely without direct descendants today. It reached its ultimate expression in the debates over Ratification of the Constitution. Because the Constitution was granting new powers to the government, there were those who wanted a statement of inviolable rights to be a part of that Constitution. Because the Constitution was supposed to be granting limited powers, there were those who feared adding that statement, because any such statement would eventually be found wanting.

What we don’t do is recognize the original intent to ensure that government continued to be limited, albeit with some additional powers to achieve some limited goals, and that the People did not find themselves constantly molested by that government, in the name of achieving those goals.

In the end, this has happened — Scott believes — because of politics being elevated over principle, such that some of the People endorse ignoring the Constitution when they hate the beneficiary of constitutional principles.

While many things escape our conscious awareness, many other things do capture our attention. It turns out that what we pay attention to and how we understand what we perceive are not determined at random. Rather, preexisting patterns of thinking direct our attention in predictable ways and color our interpretations of those stimuli to which we do attend.

In one famous experiment, students from rival schools watched a football game between the schools’ teams. Students’ assessments of the rule violations committed by each team and the overall play were influenced (many would say biased) by which school they attended. Rather than simply recording the violations and the play, observers interpreted the action in accordance with their predispositions. Recent research that seems to reflect the same phenomenon found that NBA referees’ foul calls were influenced by the race of the player and the race of the referee. In the case of both African American [sic] and Caucasian players, officiating crews called more fouls against opposite-race players. [9]Jennifer K. Robbennolt and Jean R. Sternlight, Psychology for Lawyers: Understanding the Human Factors in Negotiation, Litigation and Decision Making, 11 (2012), footnotes omitted.

From there, things just get more (and more) complicated. [10]Really.

And what we have now, in terms of our “system,” is two-hundred-and-twenty-five years of deliberations in the Chamber of Secrets — the United States Supreme Court — wherein disparate collections of human beings from rival teams, or, if you will, referees of different stripes, assess rule violations.

But one can also argue that when so-called “liberals,” or “progressives,” hold sway in the Chamber of Secrets, they do not do much better. Who helped erase the limits of the Constitution by elevating one limited power — the Commerce Power — over all else? The New Deal was hardly the work of conservatives. They actually resisted it tooth and nail, until the infamous court-packing attempt of Franklin Delano Roosevelt. Roosevelt would go on to appoint eight of the nine members of the Chamber of Secrets. Ever since, the Constitution has remained the property of the Dementors.

In the end, I guess I agree with both Clark and Scott. The current system is working the way those in power want it to work. I don’t agree that this is how it was designed, but it is how — over the last 225 years — it has been redesigned. The original system outlined in the Constitution for a limited government with limited powers to impinge upon an undefinable list of rights retained by the People — that’s been broken.

That, I believe, is what provoked Thomas Jefferson to say,

[W]hat country can preserve it’s [sic] liberties if their rulers are not warned from time to time that their people preserve the spirit of resistance? Let them take arms. The remedy is to set them right as to facts, pardon and pacify them. What signify a few lives lost in a century or two? The tree of liberty must be refreshed from time to time with the blood of patriots and tyrants. It is it’s [sic] natural manure. [11]The Thomas Jefferson Papers Series 1. General Correspondence. 1651-1827, Thomas Jefferson to William S. Smith, November 13, 1787, image 515 of 1119, at http://hdl.loc.gov/loc.mss/mtj.mtjbib003123.

My own proposal is that what we need here is a reboot. Sadly, I don’t know exactly what that means. Again, Clark is right about the [re]design of the system. My answer to Scott is to replace the current redesigned system with the original design — sans things like stripping people of color of their freedom, and women of the right to vote.

But how do we do that? What would a proper reboot look like? I have no idea.

But I suspect I at least think that I’ll know it when I see it.