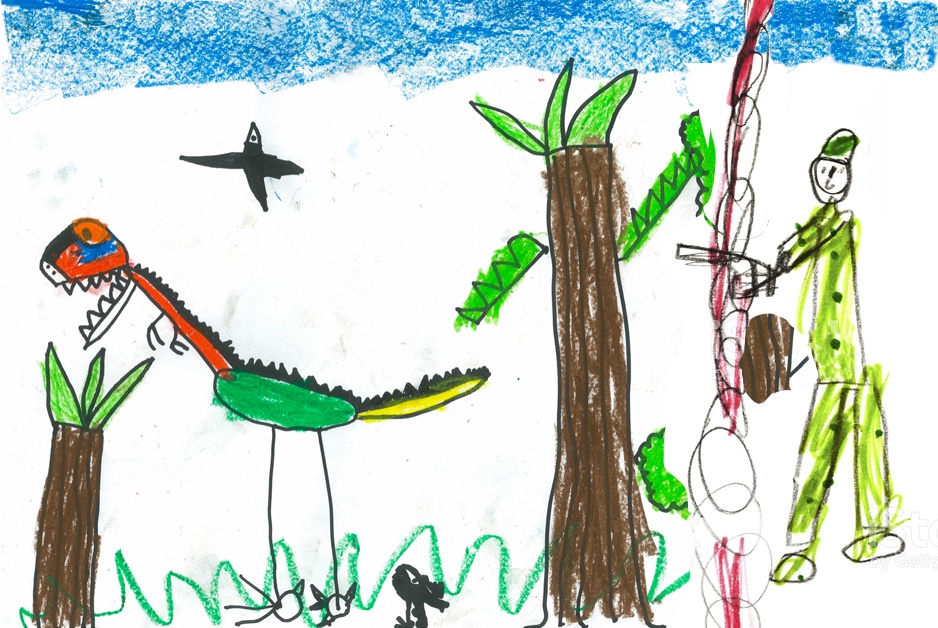 For a thinking, attentive person who grew up in a free and democratic republic, life in the United States lately almost daily seems like an episode of the Twilight Zone, but with cartoons. One day, you wake up, and find a seven-year-old kid being suspended from school for chewing Pop Tart into the shape of a gun. And it’s not just the school officials who think this warrants a suspension, but their lawyer — their freakin’ lawyer, for goodness sake! — pens a thirty-page opinion that supports the decision to suspend.

A seven-year-old. For eating a Pop Tart. Into a shape. The shape of a gun.

Your first thought is that this makes John Yoo look almost sane.

But then the next day, it’s a sixteen-year-old, and he’s not just suspended; he’s arrested and charged with a crime.

And the gun doesn’t even have the substance of a Pop Tart. It doesn’t even actually exist, because it’s just the word “gun” in a fictional story. But….

Yeah, you read that right: Dead Dino. No word on how many of his fellow students were emotionally-scarred by the event, but the teachers were clearly petrified.

By a gun, and a dead pet dinosaur. In a story.

A piece of fiction.

But the story I’m telling you is true. One wants to see this as some kind of crazy hoax, but I’ve not been able to find that it is. Some kid took a trip down the rabbit hole — or is it us taking the trip? Sadly, in today’s United States, it’s all too believable.

The sixteen-year-old’s mom — well, I’ll let her say it:

“I could understand if they made him re-write it because he did have ‘gun’ in it. But a pet dinosaur?” Ms Gray told Live5News, suggesting the reaction was over the top.

Note that she is not without sympathy for the concerns of the school. She would have him re-do the assignment because, after all…gun! But even she still hangs on to a thread of sanity as she says that she thinks the school overreacted.

This is going to be the shortest post I’ve ever written, because I honestly do not even know what to say. I’m dumbfounded. Flummoxed. No, I’m fucking gobsmacked. Talk about the suspension of disbelief!

What in the world — in what world — do we criminalize imagination?

It’s as if every authority in the United States somehow went down the rabbit hole, stole the caterpillar’s hookah, and then ate the mushroom from under him.

The reference is particularly apropos when one considers that a number of people have pondered whether Alice in Wonderland is a book about drugs.

Alice’s Adventures in Wonderland is, on one level at least, the story of a girl who disappears down a rabbit hole to a fantastic place full of bizarre adventures.

Since the 1960s there has been a trend for readers to identify an underlying drug theme in the book.

The popular film, The Matrix, notably played on this theme:

You take the blue pill, the story ends, you wake up in your bed and believe whatever you want to believe. You take the red pill, you stay in Wonderland, and I show you how deep the rabbit hole goes.

I don’t know how much deeper it goes than arresting kids for writing stories about killing pet dinosaurs — and I don’t care if they use a freakin’ bazooka. God only knows where Hanna-Barbera would be today.

But, as the linked story goes on to point out,

[T]he references may say more about the people making them than the author.

And us? What does it say about us — U.S. — that chewing a Pop Tart into the shape of a gun, or writing a story about using a gun to kill a neighbor’s pet freakin’ dinosaur (!) will result in suspension, and even an arrest?! I mean, it’s not like he really killed a neighbor’s pet dinosaur with a gun!

I’ll tell you what I think it says, and this isn’t just my literary interpretation: The United States of America has gone batshit crazy. We’ve become a pathetic, paranoid, pitiable nation run by people who have gone delusional with too much power and a far greater imagination than that displayed by our bewildered children.

And it’s got to stop, because these people are not taking us down the rabbit hole with them; they’re flushing our children’s lives down the toilet.