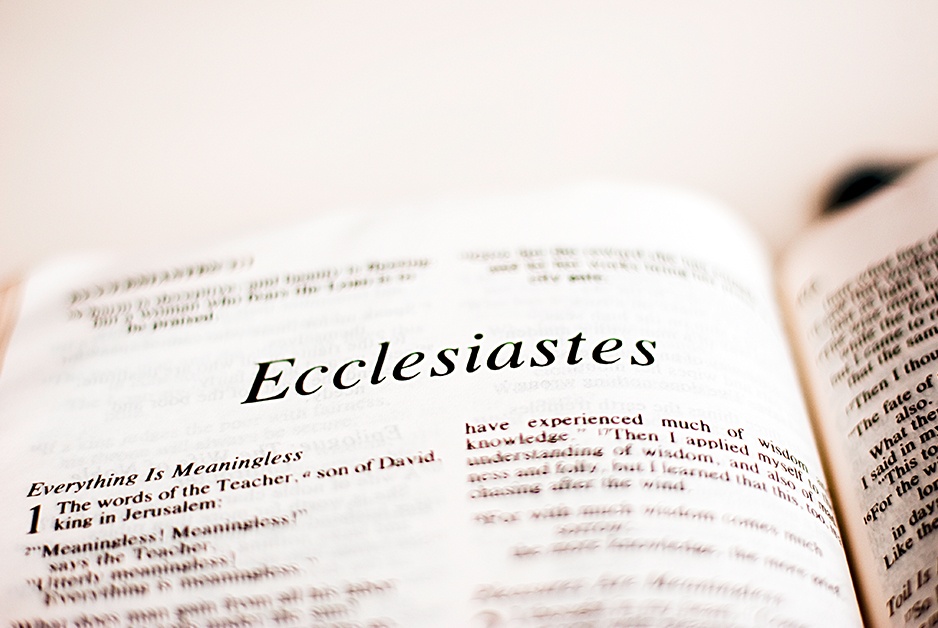 This morning, I find myself pondering words of woeful wisdom from the writer of Ecclesiastes.

A generation goes, and a generation comes,
but the earth remains forever.

The sun rises, and the sun goes down,
and hastens to the place where it rises.

The wind blows to the south
and goes around to the north;
around and around goes the wind,
and on its circuits the wind returns.

All streams run to the sea,
but the sea is not full;
to the place where the streams flow,
there they flow again.

All things are full of weariness;
a man cannot utter it;
the eye is not satisfied with seeing,
nor the ear filled with hearing.

Is there a thing of which it is said,
“See, this is new”?
It has been already
in the ages before us.

There is no remembrance of former things,
nor will there be any remembrance
of later things yet to be among those who come after. [1]Ecclesiastes 1:4-11 (English Standard Version).

But, since everything today is subsumed in angry political rants, and pseudo-debates, let me quote a more contemporary poet:

There’s nothing in the streets
Looks any different to me
And the slogans are replaced, by-the-bye
And the parting on the left
Are now parting on the right
And the beards have all grown longer overnight [2]The Who, “Won’t Get Fooled Again.”

My last post elicited some interesting comments, but none so totally destroyed my argument as these from Facebook:

Hey, Rick Horowitz! You’re an insufferable dick! Law school’s not hard, it’s just a lot of reading. Get over yourself. How about we discuss why Germany has hate speech laws.

I mean, after that last one, why would I ever want to try a rational explanation of why not everyone gets the law, and why we need lawyers? As you can see, every point I made, crushed; picked apart, piece by piece. [3]And law school? No thinking involved. No learning. Just read a bunch of stuff, and you, too, can be a lawyer. Don’t worry about California’s Bar Exam, with its record-high failure rate. That’s probably just because law school’s not hard, but the test to become a lawyer is.

Okay, not really. Or, more accurately, not at all. But as Scott Greenfield—whose work never gets quoted anywhere, least of all on this blog—said in his ten-year anniversary post today:

It’s not nearly as much fun to write about the law when readers are nuts. It’s even less fun fending off the insane comments, here and by the geniuses on other social media, from reddit to the twitters….

As another of Scott’s posts notes, the nuttery is overflowing as more and more people get sucked into social justice hell over things like “Trump’s Totally New and Evil War Against Immigrants.” [4]KABOOM! Two cites to two different posts in one day! Take that, Greenfield!

The fear of future outrages is a facile justification for being extra outraged in advance, but one that has consumed a broad swathe of previously level-headed people.

And you thought fear was the domain of the Right.

How wrong you were.

I’ve been (falsely, it should go without saying) accused a time or two of being a Scott Greenfield sycophant; a puppy, if you will, who follows him about wherever he goes. It might seem that I like Scott, read Scott’s words, and not only pay close attention to what he has to say, but frequently quote him here. That’s because I do. But I’m not a very good puppy. Scott and I don’t exactly see eye-to-eye all the time. No surprise there: we’re both lawyers; we both have egos (as at least all the best lawyers do); and we don’t have exactly the same knowledge, background, and experiences.

Yet…we are both lawyers. Our knowledge comes from, among other things, having training as lawyers that has lead us to have similar experiences defending people—as Scott likes to say—”in the trenches.” And these things have made us both good lawyers. [5]You don’t have to take my word for that. You can read what others have had to say about our defense of others elsewhere.

But, as I said, we don’t always see eye-to-eye.

Scott thinks the nuttery is filling up because (among many other reasons) people are jumping the gun on Trump.

My pal, Stephanie West Allen, sent me a link this morning about a Yale history professor who says we have “maybe a year” to defend America from Trump, who is “literally Hitler.” This isn’t a serious point. This is insanity.

Yes, saying Trump is “literally Hitler,” is insanity. Which is another of those things some people (and I think, sometimes, Scott) have wrongly believed I think.

Let me be clear and unequivocal here: Trump is not literally Hitler. So far, he’s not remotely Hitler. The differences begin the moment you recognize that Hitler was the leader of the Nazi party in Germany from 1934 to 1945. It may make many people sad, but while Trump is also the leader of country—the United States of America—he is not the leader of the Nazis, or even the so-called “Nazis/neo-Nazis,” better-known as the alt-right. True, they seem to love him.

Except when they don’t.

But as I said in “Godwin’s Shortcut,”

There will be no explicit comparisons of Trump to Hitler.

I’ve said that for the same reasons that Scott says calling Trump “literally Hitler” is insane.

Because it’s insane. You should read the posts linked above from Scott, because I don’t want to just repeat everything he said. My statements on the matter to a certain degree track his because, as I said, we’re both good lawyers. We’ve watched certain things happening for years. But we both understand—how shall I put this? since this is a law blog, I’ll put it in legal terms—issues of justiciability. There is no case here for deeming Trump to be “literally Hitler.” There may be a lot of controversy, but that’s mostly the production of prolific imaginations, coupled with weak recognition of the disutility of facile analogies.

Hitler rounded people up, based on a number of factors—mostly, but not exclusively, having to do with their culture (or religion, for those who don’t know what Judaism really is)—and had millions of them murdered. Trump hasn’t rounded anyone up. So far, the most he’s done is say he doesn’t want some people in this country. The facile analogy to Hitler is believed by some to hold because they don’t understand his methodology builds upon what Presidents like Obama did during their own presidencies, and the fact that his non-Mexican targets (and probably some of his Mexican targets) share a culture (or religion, for those who don’t know what Islam really is). Hitler has not shoved anyone into ovens, or gas chambers. He hasn’t proposed doing so. Nor has he encouraged anyone else—alt-right acolytes notwithstanding—to do so.

More important than Trump is today’s milieu—the particular time and place—that spawned his political “career.”  Again quoting myself (instead of Scott Greenfield, this time):

I’ve often thought about what it must have been like to live in 1930s Germany. To see the nascence of Hitler, and his Nazi political party. What must people, especially people who disagreed with Hitler, have thought? Did they say that it was all talk? Did they say he wasn’t really saying what it appeared he was saying? Did they say it was just politics? Did they say, “He’ll never become our ruler”? Did they say, “The People will never vote for him”? Did they say, “If he does win, he’ll never do anything like what his critics are worried about, anyway”? Did they think their Constitution, and the Rule of Law, would prevent it?

This (I think) is where Scott and I don’t see eye-to-eye. But it’s also where so-called SJWs (the misnamed “social justice warriors”) and I do not see eye-to-eye. If I could just get Scott to tell more jokes, I could pull in another set of lyrics here.

In any event, my musings about what it must have been like to live in 1930s Germany were never meant to say that Trump is “literally Hitler.” I’m concerned about the rest of us. Our lack of desire to maintain a free nation—free of governmental control, and free to pursue our own lives unfettered by the fears of fellow citizens.

The United States has, frankly, lost its mind. Consumed by avarice, too many of our “leaders” eschew the ways of the so-called “robber barons” of the 20th Century. These men—and, yes, they were pretty much always men—may have had their faults, but they actually gave a shit what happened to the world, and they cared about freedom not as a commercial, as part of their brand, but because they actually believed in freedom. Modern-day robber barons have none of the desire to improve society of these men, but all of their acquisitive drives for power and wealth.

The “old guys”—I’m talking Vanderbilt, and Carnegie, and others of their time—got rich as a side effect of creating things that improved society; guys like Trump don’t really create anything. To build their wealth, they use their names, branding Towers, and anything else that doesn’t move fast enough; and when in political power, fear. With more money than even God could spend, they’re nevertheless never satisfied, which is why they favor tax cuts over social programs.

The hoi polloi, or ordinary folk, just don’t get it. I’m not sure why. Maybe it is because, as Ron White said, “you can’t fix stupid.” Maybe it’s because of the warping of the American Dream, which today has people supporting the unbridled support of wealth by the aforementioned leaders because the hoi polloi really believe they will join that same club some day. The reality is the highest most of them will ever earn in their lifetimes—and that includes the doctors, lawyers, and architects—is earned in minutes, hours, or at most a few years, by those who control our nation.

Whatever the reason for this state of affairs, I worry about the State of the Union, and the union of the states. We are, and “literally” in some cases, ripping ourselves apart. [6]However, even this isn’t something new under the sun. And frequently over words. Ironic words, at that, given the way so many SJWs think their freedom of speech has been too long impinged.

The tl;dr point of what I’m saying today is this: Trump isn’t Hitler. At least, he isn’t yet. Importantly—very importantly—he may never be. But, unfortunately, the United States—and we don’t seem to be alone in this—is working overtime to build the kind of world where, if he isn’t, someone is bound to come along who will be. And all the necessary tools to effectuate that reality are in place.

You want to stop it? Stop all the pointless marching and bitching about Trump’s latest twit. Listen to a few lawyers, who have been trying to warn you about the police state we’ve been building bigly for a very, very long time. Make actual phone calls, and write actual letters to your legislators. Work to change the laws that make seemingly unfettered Executive Orders possible. Let’s actually begin to limit the power of our government. And fucking VOTE!

Because Donald J. Trump isn’t the real danger in America. With apologies to my friends in the sex trade, he’s just the John for whom too many Americans, for far too little payment in return, are prostituting themselves.

Trump is just the new boss. And for the moment, he’s only building on the work of, and using the tools of, the old boss.