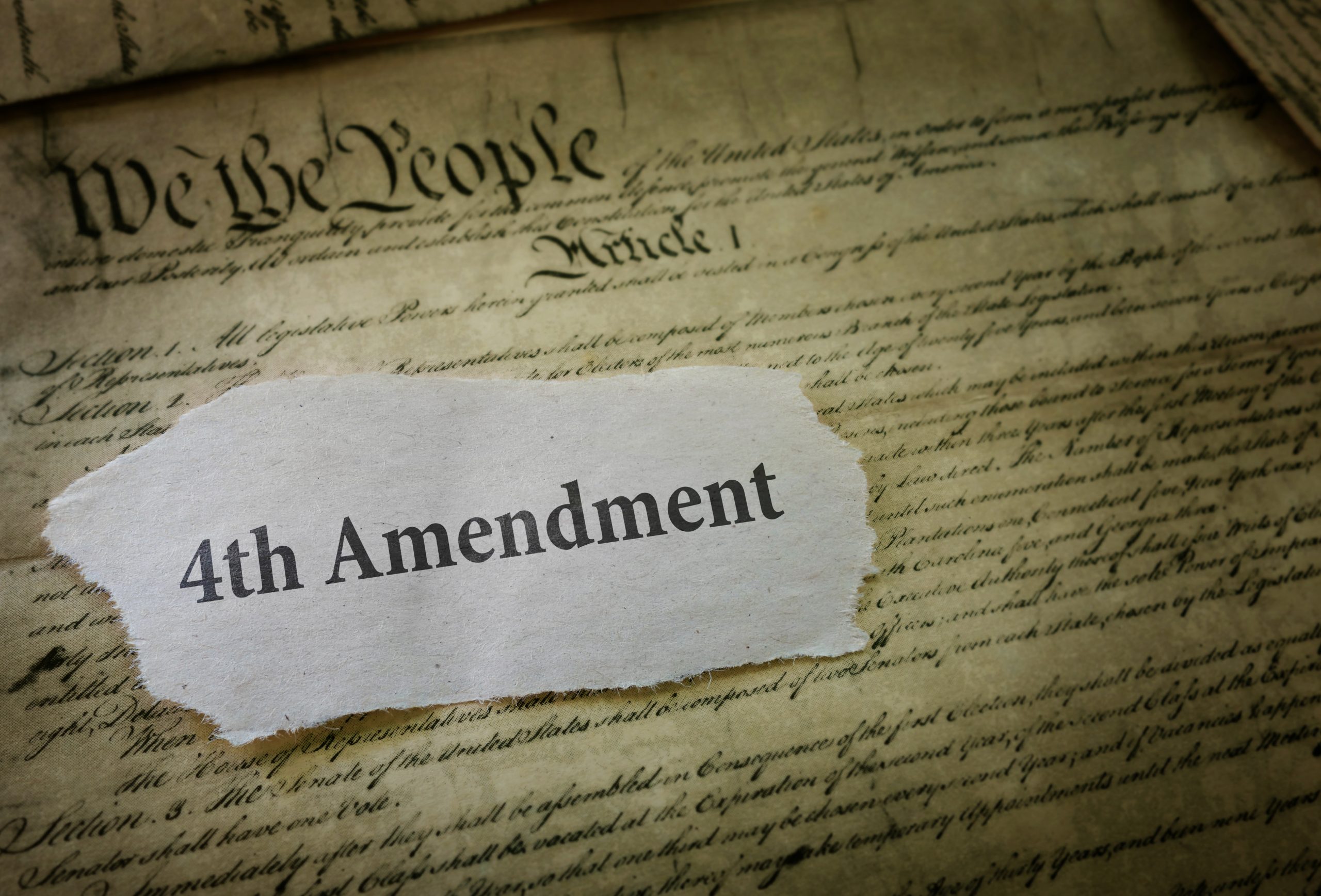 Once Upon A Time: A Tale Of Search & Seizure

Once upon a time, in the land that would one day become the United States of America, law enforcement officers of the King of England were allowed by the King to stop and search citizens of the land without the need for specific warrants.

The Birth of the Fourth Amendment

Back then, the King owned the land.  The only thing the King’s law enforcement officers needed was a desire to stop and search the person, or his wagon, stagecoach, horse, ship, or boat.  If someone did ask “why are you doing this?,” one of two types of answers would probably be given.

The first type of answer might be something like, “the person was acting nervous when he saw me.”  The King’s officer might go on to say, “The person kept glancing at a box in the corner of his wagon and then over his shoulder.  He appeared to be nervous and was sweating.”

The second type of answer was more succinct:  “I am an officer of the King.  I am authorized to search anyone, at any time, to protect the King’s interests.”

Of course, sometimes no reason was given at all.  The person objecting to the actions of the King’s officer was simply beaten into submission.

Shortly after the success of the Great Rebellion — which itself happened because people got tired of this attitude of the King and His Officers — the United States was born. Partly as a reaction to the treatment they remembered suffering from the King’s officers and partly to ensure that no future law enforcement officers of the new government ever used these excuses again, the people of the United States demanded the addition of a Bill of Rights — the first 10 Amendments to the Constitution — which included a requirement that officers of the government in the future must first get a search warrant if they wanted to search a person’s things.

Thus, the Fourth Amendment of the United States Constitution states:

The right of the people to be secure in their persons, houses, papers, and effects, against unreasonable searches and seizures, shall not be violated, and no Warrants shall issue, but upon probable cause, supported by Oath or affirmation, and particularly describing the place to be searched, and the persons or things to be seized.

But as with most stories that begin with the words “once upon a time,” so, too, is this one — including the requirement of a warrant based upon probable cause — only a fairy tale.

The Death of the Fourth Amendment

[O]ur analysis begins, as it should in every case addressing the reasonableness of a warrantless search, with the basic rule that “searches conducted outside the judicial process, without prior approval by a judge or magistrate, are per se unreasonable under the Fourth Amendment — subject only to a few specifically established and well-delineated exceptions.  Arizona v. Gant, 129 S.Ct. 1710, 1716, 173 L.Ed.2d 485 (2009).

When reminded that, after all, a crime had to have been committed for there to be a criminal, Knarrpanti opined that once the criminal was identified, it was a simple matter to find out what his crime had been.  Ingo Müller, Hitler’s Justice: The Courts of the Third Reich, with an introduction by Detlev Vagts (1992), p. 3.

Searching People On The Street

Want to search a person on the street?  No problem!  True, the United States Supreme Court has repeatedly stated:

But in the same case just cited, the Court went on to hold that:

[W]here a police officer observes unusual conduct which leads him reasonably to conclude in light of his experience that criminal activity may be afoot and that the persons with whom he is dealing may be armed and presently dangerous, where in the course of investigating this behavior he identifies himself as a policeman and makes reasonable inquiries, and where nothing in the initial stages of the encounter serves to dispel his reasonable fear for his own or others’ safety, he is entitled for the protection of himself and others in the area to conduct a carefully limited search of the outer clothing of such persons in an attempt to discover weapons which might be used to assault him.  Terry v. Ohio, supra, at 30.

Who decides whether in light of his experience, the officer had reason to believe criminal activity may be afoot?  Well, it says “his” experience, doesn’t it?  Another attorney recently told me of a case where the fact that “a white guy was hanging out with some suspicious-acting black guys in an area of town where white guys don’t normally hang out” was used to justify the search of the group.  In “his” experience, the officer said, this was indicative that something was fishy; these guys were up to some kind of no good fishiness.  And since it was night time, well, the cop just had to search them for the protection of himself and others.  The court bought that explanation.

[Y]our [sic] a trooper, youve [sic] got an entire state to follow someone if you need to in order to find some kind of violation. 9 [sic] times out of 10 if i [sic] can follow a car a few miles i [sic] can find some sort of violation to stop someone.  From a comment by an Oklahoma member of officer.com.

And if law enforcement thinks the items they want are in a car, this is just way cool, because the United States Supreme Court — after, as noted above, giving the obligatory nod to the idea that “searches conducted outside the judicial process, without prior approval by a judge or magistrate, are per se unreasonable under the Fourth Amendment,” Arizona v. Gant, supra, at 1716 — recently reiterated that:

[C]ircumstances unique to the automobile context justify a search incident to arrest when it is reasonable to believe that evidence of the offense might be found in the vehicle.  Arizona v. Gant, supra, at 1714.

There’s another little irony in this.  Although we’re repeatedly told that law enforcement officers are trustworthy — so trustworthy, in fact, that their word is usually accepted even over videotape evidence showing the contrary — courts have repeatedly held that if a car is impounded, a search is justified without a warrant in order to prove the police have not stolen anything from the car while it was impounded.  South Dakota v. Opperman, 428 U.S. 364, 369-371, 96 S.Ct. 3092, 49 L.Ed.2d 1000 (1976).  Apparently, this prevents theft by the police, because they won’t steal during an inventory search; they might if one is not done.  I guess this is because although they might steal, they won’t lie; so inventories will always be accurate and should always be done.

Probation, Parole & Consent: Since When Is Anyone’s Home A Castle?

No sexism is intended by me in pointing out that it was once said,

A man’s home is his castle.

Want to search a house?  No problem!

With one out of every thirty-two Americans under correctional supervision, you’re almost certainly able to do it under the exception for a “probation search.”  This lets you search every room in the house, regardless of whether or not the doors are locked to prevent the probationer from having access to that area of the house.  This is possible because not only do probationers and parolees have to agree to search conditions in order to get probation or parole, but courts — including the California Supreme Court — have held that these conditions can be used as a pretext for searching the home to find evidence to use against third parties.

In other words, if “Gayla” agreed to be subject to warrantless searches so that she could get probation, then “Cheryl” and “William” will also be subject to warrantless searches because they live with “Gayla.”  And it doesn’t matter that the police never intended to search for evidence that “Gayla” was in violation of her probation.  As long as the police know that “Gayla” lives in the house, they can search it to find evidence against “Cheryl” and “William.”  People v. Woods, 21 Cal.4th 668, 681, 88 Cal.Rptr.2d 88 (1999).  And they don’t even need a reasonable suspicion that there is evidence of any crime.  Id. at 675.  They don’t need a reason; they are society’s officers and they are basically authorized to search at any time to protect society’s interests.

In theory, if there is an area of the home that is not jointly controlled by the probationer and the target, a warrant is required to search that area.  Woods, 21 Cal.4th at 682.  In reality, this is not an issue.  Is the target’s bedroom door unlocked?  Obviously, the probationer could have access to this room and therefore jointly controls it.  Is the target’s bedroom door locked to prevent access to the probationer?  Hey, you just entered the house to do a search!  What if the target decides to destroy the evidence before you return with a warrant?  Ker v. State of California, 374 U.S. 23, 40-41[83 S.Ct. 1623, 10 L.Ed.2d 726] (1963).  Officers and courts refer to the need to search under that situation as being one of “exigent circumstances.”  Id.

No problem!  You can afford a criminal defense attorney, can’t you?

Finally, there is the situation where the accused person has actually consented to the search.  United States v. Drayton, 536 U.S. 194, 206-207, 122 S.Ct. 2105, 153 L.Ed.2d 242 (2002).  For the most part, this makes sense.  But you’d be surprised at the number of people who “consent” to being searched when they know the police have no reason to search them and when the people being searched know they have contraband on them and where, later, the only people who remember anyone consenting to anything are the police.

Now things aren’t quite as bad as I’ve presented them above.  Once in a blue moon, a court will grant a suppression motion, allegedly on some principle of law and another court will uphold that decision even on appeal.  I’m not exactly sure how this happens, although I’ve actually written more than a few motions that made it happen.  Generally speaking, when it does happen, the stakes are not high.  Typically, it will involve some small amount of drugs where the client doesn’t have a long history of dealing.  Or it might be a case where someone was charged with carrying a concealed weapon, but there was no evidence it had been used to hurt anyone.  Perhaps the rule the court follows is that they’re willing to uphold the Constitution so long as actual bad guys don’t get away with significant crimes.

The truly scary thing from a constitutional standpoint is the number of loopholes, or “exceptions.”  And, as I indicated above, the particularly scary thing is the exception for inevitable discovery.  This is the exception that swallows the Amendment.  Generally speaking, the courts apply it in this really odd way: If police officers would have done their job properly, they might have discovered the evidence.  Thus, inevitable discovery applies.

Alert readers will have noticed that I explicitly demonstrated how the two types of answers given by the King’s Officers prior to the existence of the United States are alive and well today, despite the best efforts of our Founders.  The third possibility that I mentioned is, as well.  Numerous cases exist wherein people have been beaten by the police for questioning them.  As one officer has testified,

We just beat people up in general.

To show who was in charge.  We were in charge, the police.  David Cole, No Equal Justice: Race and Class in the American Criminal Justice System (2000) pp.24-25.

As I wrote in my last post, if you want to see how this works out in real life, try challenging a law enforcement officer’s actions.