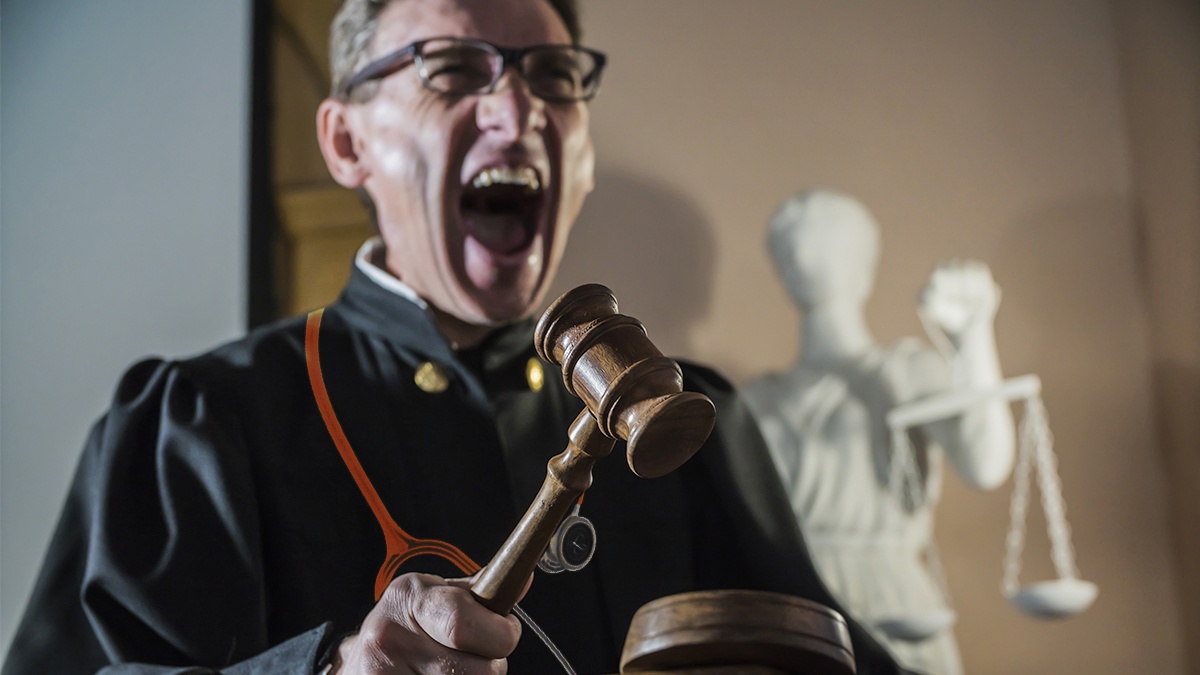 Parasites on the Bench

Dammit, Jim! I'm a Judge, Which Makes Me a Doctor!

The other day, I wrote about courts taking “junk science” to a new level, by allowing testimony about Child Sexual Abuse Accommodation Syndrome. CSAAS, I argued, is such piss-poor nonsense that it doesn’t even deserve the label “junk science.” A parasite on the bench — that is, a judge — in Ohio has decided to take things to an even newer level by declaring himself to be more knowledgeable than the doctors at West Chester Hospital.

The judge has ordered the hospital to give Jeffrey Smith, who may be dying from coronavirus, a deworming medication.

Now, as I’ve said before, I’m not a doctor. I’m a lawyer. I’m somewhat taken aback by people who aren’t doctors, but think that their training in some other profession makes them capable of second-guessing doctors specially trained to handle things like COVID prevention, or treatment.

On Aug. 23, Butler County Judge J. Gregory Howard ordered West Chester Hospital to treat Smith with ivermectin for three weeks, as requested by his wife. The judge made the decision even though the Food and Drug Administration has not approved ivermectin to treat or prevent covid-19 and has advised against that use amid spiking calls to poison centers after people took potent versions of the drug meant for livestock.

— Hannah Knowles and Timothy Bella, “A hospital refused to give ivermectin to a covid patient. Then a judge ordered doctors to administer it.” (September 1, 2021)

Now, to be fair, he may be parasite on the bench, but that means he is a judge. [1]I suppose this disclaimer is necessary: not all judges are bench parasites. In fact, I suspect most are not. In the phylogeny that includes judges, judges do not constitute a monophyletic group. Yet, too many judges believe they know more than experts on the subject matter of the experts’ expertise. And in the United States, judges are at least demigods, although I’m sure to piss off a judge by denying them full G-d status.

And to be even more fair, although ivermectin began as a veterinary treatment for internal and external parasites in animals, there is a version of ivermectin for humans used to fight parasites.

It is effective against a wide range of parasites, including gastrointestinal roundworms, lungworms, mites, lice and hornflies. Ivermectin is also highly effective against ticks, for example, the ixodid tick Rhipicephalus (Boophilus) microplus, one of the most important cattle parasites in the tropics and subtropics, which causes enormous economic damage.

It’s just not effective against a virus, like coronavirus — a.k.a., COVID, or COVID-19 — or anything other than parasites like worms, mites, or ticks.

I have to tell you, I had a flashback when I saw this story. Years ago, I represented a young man charged with murder, along with a group of other young men.

By “young,” I mean my client was not an adult.

In fact, he was a young teen with significant mental impairment. This child was so impaired that he played like a 6-to-8-year-old child. He was frequently teased for such things as soiling or wetting himself. Older kids enjoyed taking advantage of him, getting him to guzzle beer, or smoke marijuana, so they could watch him try to walk, or talk, and just generally do what you do when you are already significantly mentally-compromised and someone gets you drunk or stoned.

During the murder, my client had been present because of this one kid he considered a friend. Someone he trusted to take care of him. (And, to be fair, I think that kid usually did.) Someone gave these kids tree branches, and told them if they didn’t “help,” they’d get beaten, and killed, too.

One eyewitness — an adult who came upon the scene — testified my client stood there frozen, as others beat the victims with tree branches, and two-by-fours.

This changed when the boy he considered his protector took off running. Suddenly, my client bolted, too.

Due to the heinous nature of the murder, the District Attorney wanted to charge everyone as adults, and for first-degree murder. The judge — I don’t know if he counts as a bench parasite — set a hearing to decide on transferring my client to the adult court.

I hired a real expert — I don’t remember his name now, and it doesn’t matter — who was fairly famous in his field. This has been so many years ago. And, dammit Jim, I am not a doctor! I’m a lawyer! So I don’t remember all the medical issues this expert advised me on.

This guy was so famous, and in such high demand, that we had a hard time getting him to the hearing. As I recall, we rescheduled several times, because the expert had flown off to this country, or that country, to do doctor things. He also educated other doctors around the world on issues relating to neuroscience and psychology.

I seem to remember something about some kind of a “field disorder.” My client had, essentially, a data-processing problem.

The world-renowned expert testified for almost two days regarding the neuropsychological capabilities of my client.

At one point, he explained his data-processing abilities by talking about the I Love Lucy episode where Ethel and Lucy unsuccessfully try to keep up with the chocolate conveyor belt. At the time of the murder, my client suffered sensory overload; this one adult witness’s testimony backed this up.

Now, mind you, my expert had interviewed my client. He had given him tests. He had talked to family members to obtain a history.

The judge did not do one of these things, because, well, dammit Jim! He’s a judge, not a doctor! Or maybe a bench parasite.

After nearly two days of testimony, I felt confident my client would remain in the juvenile system. I planned to then do an adjudication, using this same testimony, to show my client could not be held responsible for the murder, just because he was present.

Maybe the word “über” is no good anymore, thanks to the pseudo-taxi company. On the other hand, maybe it will function well as a double-entendre fit for this judge’s driving intellect.

Anyway, as I said, after the renowned expert’s two days of testimony, I was feeling confident of a win.

Then came the bench-parasite-like ruling. The judge decided my expert’s testimony was not credible. He rejected all the medical testing, the fact that my expert was famous in his field, and so on.

Why? Because a probation report showed that my client, when he was a very young child, once said “no!” to a teacher, and ran from her when she told him to do something.

I kid you not.

Despite judges’ own widespread beliefs that they are smarter than anyone else in the world, including medical doctors, the Center for Disease Control, scientists, and others with far more scientific training than pretty much any judge — let alone any bench parasite — could ever dream of getting, they simply are not.

But now a judge overrules an entire hospital — presumably a hospital with more than one doctor — and orders a dewormer for someone dying of COVID.

Perhaps the judge did this because he believes some of the claptrap flying about that ivermectin has been shown to be effective in preventing COVID deaths. Some early studies did make this claim. Most of those have been shown to be fraudulent, including one of the “largest” studies, which had claimed a 90% success rate.

The paper’s withdrawal is not the first scandal to dog studies of ivermectin and COVID-19. Hill thinks many of the other ivermectin trial papers that he has scanned are likely to be flawed or statistically biased. Many rely on small sample sizes or were not randomized or well controlled, he says. And in 2020, an observational study of the drug was withdrawn after scientists raised concerns about it and a few other papers using data by the company Surgisphere that investigated a range of repurposed drugs against COVID-19. “We’ve seen a pattern of people releasing information that’s not reliable,” says Hill. “It’s hard enough to do work on COVID and treatment without people distorting databases.”

I just wish someone would come out with a study showing ivermectin as a reliable treatment for Dunning-Kruger.

No, I guess that won’t help remove these parasites from the bench, after all. Not unless some real judge steps in and orders treatment.