Yesterday, I wrote an article about Orange County which was unsatisfying to at least one reader. The problem, of course, was with my writing; not with the reader. I wrote the post over the course of the day the hearing was being held, going off snatches of information that I was able to pry out of some witnesses. Most of the information that I got yesterday came in a very short phone call with a friend of mine, Eric H. Schweitzer, who serves as the co-chair for the legislative panel for the California Attorneys for Criminal Justice, and who had driven down from Fresno to witness the hearing. Eric has a particular interest in recusal issues, and is a wealth of information regarding them, but my short conversation with him did little to tell me what actually occurred.

To complicate matters, I knew nothing about the hearing before someone started “live blogging” what he was seeing there; that is, posting occasional updates, really, to a group of other CDLs [1]Criminal Defense Lawyers. to which I belong. I started trying to obtain more information, but it wasn’t until late afternoon that I started to get documents. In fact, I don’t think I even knew that the case involved a defendant named “Arroyo” until I received the briefs.

By then, I’d been having too much fun running off with an idea one of the commenters to the “live blogging” had made about a merkin, for which I’d even made up a special hat. The post, for me, had evolved – devolved? – more into a piece about the pervasive corruption within the Orange County District Attorney’s Office, and its impact on all accused persons in Orange County than about Arroyo’s case. And I’d begun to write more for entertainment than for informing.

But, I’ve been reading the briefs, and other information that I received last night, and decided that a post about the actual recusal motion, or the hearing, was in order. Although I still know less about the hearing itself, I think I have a pretty good handle on the motion, and what it was about. Much of the material involved declarations about the Alley-Crawford possibly one-sided slugfest, and since this post is about the motions, I won’t really get into that material.

I wanted to keep this short. As I was about two-thirds of the way through writing it, though, I realized it won’t be any shorter than my normal fare. So, okay…

The motion itself had two aims: the first was an outright dismissal of the case, based upon “outrageous conduct” of the government; the second was, that if the dismissal was not to be granted, the Orange County District Attorney’s office (OCDA) was to be recused. For the non-legal folks who read, that means the defense team was asking the judge to say that, for reasons I’ll mention below, the OCDA could not prosecute the case, and the Attorney General would need to step in, and take over. [2]BTW, there was a representative of the Attorney General present to argue against recusal.

And so, we have two motions, really. A motion to dismiss, and a motion for recusal. The latter would only be heard, or necessary to discuss, if the former failed. However, the motions were actually written, and submitted, as if they were in fact one motion: “Motion to Dismiss the Information or Recuse the District Attorney’s Office Pursuant to Penal Code Section 1424.”

The Motion to Dismiss

The basis of this part of the motion was two-fold. Terry MacCarthy may like threes, but around here we apparently enjoy the terrible twos more: not only did the defense (in, frankly, a somewhat sloppy brief which even contains incorrect footer titles, along with other errors typographical, grammatical, and logical) put forth “two reasons,” but each of the two reasons appears to really contain two reasons. They are:

The factual basis for these claims boils down to, again, two things:

Naturally, all this is illegal. Witnesses may talk to whomever they wish. After the hearing, the judge allegedly had the witnesses told this.

As to claims 1a and 1b above, the defense argued in their brief that the OCDA told at least one witness who was initially cooperative with the defense not to cooperate with the defense, nor to speak to them. Subsequently, that witness did stop cooperating, and said she would not comply with defense subpoenas, and, in fact, she failed to show up in court when she had been subpoenaed. The defense claims not to know how to find her now, as she appears to be avoiding them.

Of the two other witnesses, who were present when Dillon Alley allegedly beat James Crawford, one “appeared very reluctant and intimidated in speaking with the defense camp” and expressed concern the defense would “twist her words.” From this, plus the treatment of other witnesses, the defense argued that the OCDA had intimidated her, and dissuaded her from talking to the defense. The other witness who had seen Alley beat Crawford decided after that to invoke her 5th amendment right to remain silent, and was not granted immunity – so the allegation goes – because her testimony would have been hurtful to the prosecution case.

There were further allegations regarding other witnesses. Apparently, several witnesses are undocumented persons; in other words, they are not U.S. citizens, and had no legal right to be in the United States. The OCDA arranged for those witnesses who were favorable to them to obtain U-VISAS which allow them to remain in the United States, but allegedly refused to do this for witnesses who would have been favorable to Arroyo.

By controlling who received U-VISAS, and who received immunity for their testimony, the prosecution “controlled” and “orchestrated” the “truth” that would be brought before the jury.

So the claims went.

The law applicable to the case required that the defense show that the behavior of the government had been so outrageous as to “shock the conscience,” and that there was a cause-and-effect relationship between the government’s behavior, and the inability of the accused person to receive a fair trial. If the defense could convince the court of this, the case would be dismissed; the prosecution could not proceed.

You’ll note that I haven’t told you any facts about Arroyo’s case. I don’t consider them to be important to the motion(s). Suffice it to say that it involves a fight, some people getting stabbed, the possibility that Arroyo was attacked first, and then withdrew from the immediate action, and so was not involved. And, allegedly, the defense believes that the witnesses would testify to this, if they had not been intimidated by the prosecution.

I’m going to presume that the lawyers reading this don’t need me to do a legal analysis; and non-lawyers aren’t going to benefit from it anyway. And – dammit, I’m already hitting my normal post word-limit – so I’ll just say that the judge appears to have decided that there was insufficient evidence of outrageous conduct on the part of the government which implicated a protected right of Arroyo. There may have been some bad things that happened, but it’s unclear that it was the government who did them – or just some flipping-out DA investigator, who, even if he did what was alleged, did not do so at the behest of the government – and, even if it happened, and possibly even if the government was deemed to be behind it all, it didn’t impair Arroyo’s right to a fair trial.

If I properly understood Eric’s comments in our cell phone conversation as he was returning from the hearing, the judge stated that the witnesses could be called, impeached with prior statements, and would presumably allow evidence regarding the alleged intimidation/dissuasion to be brought before the jury by questioning the witnesses about their change in willingness to testify. [3]How that will account for the allegedly now-missing witness, I don’t know.

I’ll add that on my reading of the defense briefs, they didn’t do a great job of presenting their case. Even when they cited supportive cases, those cases really dealt with more direct impairment of an accused’s rights, such as interfering in the attorney-client relationship. Most of the cases they cited did not result in reversal, or any benefit to the defense, so citing them doesn’t really seem helpful. [4]Without going back to double-check, I seem to remember that, actually, none of the cases cited resulted in reversal. Some of those cases were more egregious than anything done in Arroyo’s case. [5]Unless you count the beating of James Crawford as something being done in, or to, Arroyo’s case, which the court did not because, again, witnesses could be questioned about it, thus allegedly curing any defect its happening brought to the fairness of the trial.

The court may have made the right decision, if you look at this objectively, in that while the things the prosecution is alleged to have done are pretty bad, the court is supposedly going to allow the defense to let the jury know about these things: the dissuasion, the U-VISAS, the failure to grant immunity, and possibly even the beat-down. On the other hand, I worry about the tendency of jurors to overlook bad behavior of cops and prosecutors, if they think it was done “for the right reason”; that is, to keep the bad guy from getting away on a technicality.

Of course, here, the “technicality” is the unimpeded truthful testimony of witnesses.

The Motion to Recuse

And so, the motion to recuse. This should be easier to explain, in that it relies on the same facts. This motion was made pursuant to California’s Penal Code section 1424, as a remedy for the conflict of interest the OCDA was alleged to have created which, so the claim goes, “made it unlikely that [Arroyo] will be treated fairly through the duration of the trial.”

Again, no legal analysis. Sure, this is a legal blog, but I’m not here to teach anyone how to practice: the lawyers reading should already have a clue about this; and the non-lawyers don’t need an exegesis.

Suffice it to say that under Penal Code section 1424, as the defense brief itself noted, the defense needed to show that “the evidence shows that a conflict of interest exists that would render it unlikely that the defendant would receive a fair trial.” As I wrote yesterday, Arroyo was not more impaired in that regard than any other person in Orange County prosecuted by the OCDA.

Indeed, I think the defense may have actually missed this point, as demonstrated by their statement that the conflict “made it unlikely that [Arroyo] will be treated fairly through the duration of the trial.” This statement appears to mean that they defense does not believe Arroyo will be treated fairly by the prosecution. [6]If that’s true, that’s actually irrelevant. And, as I noted, the OCDA apparently doesn’t treat anyone fairly.

But, again, more importantly – and I didn’t hear from anyone that the judge said this, but it’s true – it’s not enough to say that the OCDA will treat Arroyo unfairly. One must show that Arroyo won’t get a fair trial unless the Attorney General, or someone other than the OCDA, tries the case. The judge seems to think – and I don’t know if he’s wrong on this; certainly he’s less wrong on this than he is on the motion to dismiss – that any defects will be cured by allowing the alleged malfeasance to be presented, and argued, to the jury.

Whew. Hopefully, that clears up what yesterday’s hearing was about, and what happened. 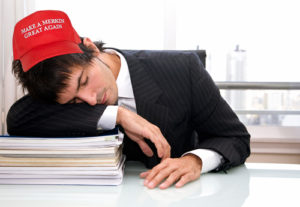