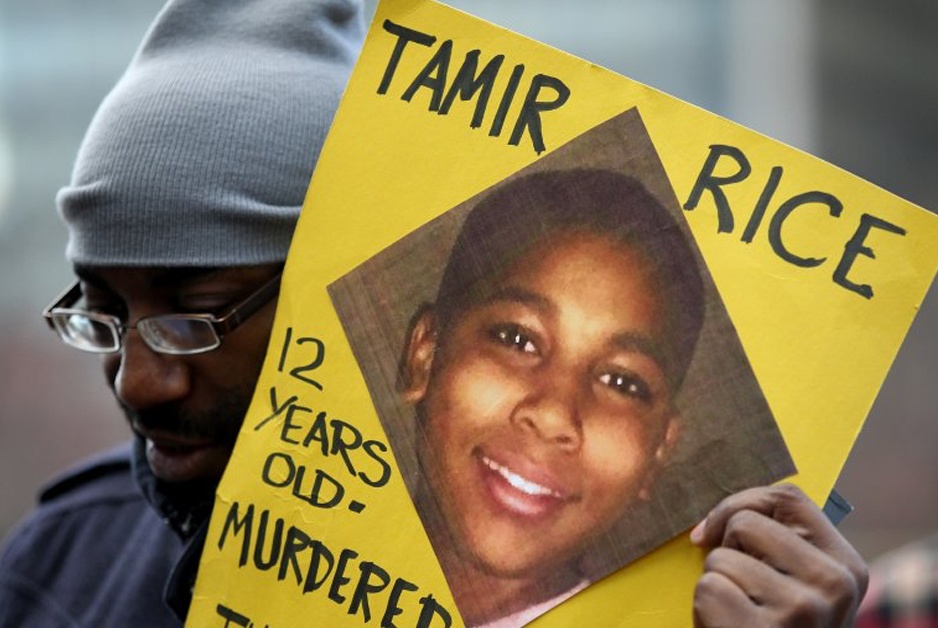 By now, it’s no news that a “grand jury” refused to indict the killers of Tamir Rice. This happened because the killers were murderous cops, and for no other reason. If anyone else other than a murderous cop had killed the child, they would feel the full weight of the criminal justice system. In fact, they likely would not even get a fair trial.

But these were murderous cops, and murderous cops today have carte blanche to ignore reason, law, or simply to behave as if they were human, and had children, or friends with children, themselves. At worst, they might have to hire an attorney, and wait a up to a year or so before everyone decides to move on to something else.

Those of us who know how grand juries actually work, and heard how this particular “grand jury” “worked,” were unsurprised at the outcome.

As Jamelle Bouie wrote on Slate, this is because police now frequently – all too frequently – use force as a first resort anymore. At least when dealing with black people.

And white people are okay with it.

Part of this is because, almost always, whenever a black person is murdered by a murderous cop, the public is immediately given all kinds of excuses for why the murderous cop was forced to kill. “He was a gang member,” which they may, or may not have had evidence of at the time of the killing. “He had a criminal record,” sometimes even involving violent crimes – but again something that was learned by the murderous cop after the killing was done.

But even if they can’t dirty the black person up that way, there is some other “had-no-choice-but-to-kill” reason: “furtive movements” used to be the go-to, but now that we’ve all been taught that all black men carry guns in their underwear, it seems to be “reached for the waistband.” We are also told that if the black person had only complied with orders, the murderous cop wouldn’t have been forced to kill the black person. For some reason – as in Tamir’s case – there almost never seems to be evidence of any actual orders being given. When there are, the orders given often conflict with other orders being simultaneously given by another murderer.

And so, part of the reason is that white people who don’t know better are mollified by what appears to the uninitiated, or the untrained, or just the white, as a reasonable explanation.

But setting aside the fact that cops don’t legally get to just give arbitrary orders to people, this turns out to be just another piece of cop bullshit. That is, in a nation such as the United States of America once was, there were laws. And cops had to follow them, too. We had a Constitution that limited the power of the government.

All that is history.

If stop and think about it, you’ll realize that this is not hyperbole. People in the United States are now expected to follow orders to “shelter in place” – that is, to consider themselves under a form of house arrest – whenever cops wish to occupy a particular space. Failure to do so can result in you becoming the victim of manslaughter, or even just outright murder, with no consequences to those who kill you.

The other night, on the CBS Evening News with Scott Pelley, if I recall correctly (I flip back and forth between stations when the news is on, because commercials come every sixty seconds or so), a story pointed out that the Las Vegas Police Department was saying that people were being told not to go out in public carrying large bags because (I believe) of a parade, or something.

If you did go out in public carrying a large bag, the police said, you would be detained and searched. No ifs, ands, or buts.

I suspect the majority of people are okay with this. Because “safety.” Like it would be impossible for someone hell-bent on destruction to carry a destructive device – gun, or even bomb – hidden anywhere except in a large bag.

And what counts as “large,” anyway? My briefcase? A computer bag? A camera bag? A fairly-ordinary woman’s purse? Or does it have to be an Abominable-Snowman-sized backpack?

But I digress. Because I’m a discerning kind of dude who recognizes the difference between living in a police state where safety isn’t really the concern, and a constitutional republic of free people where you can carry whatever fucking size bag you want when you go out into a public space. Just not in ‘Murca, where cops give excuses for detaining people like,

“People who walk up to a car and put packages in the trunk and then leave – that is suspicious.”

No joke. It had nothing at all to do with the fact that the Sikh men who were the target of an illegal detention wore turbans, and ‘Murcans, including ‘Murcan cops, apparently, don’t know the difference between Sikhs, non-terrorist-minded Muslims, and Muslim terrorists. Nope. Not that at all. It was just because walking up to a car and putting packages in the trunk before driving leaving a place with those packages “is suspicious.”

Because everyone who intends harm against people at a place like the Qualcomm Stadium in San Francisco where this occurred takes the fucking bombs, weapons, or whatever else the cops apparently thought they were using to imperil the stadium with them when they leave. Because that’s how you take down a stadium, dontchaknow?

If you have the ability to think, you have to recognize that none of this is really about safety. First of all, despite the fear-mongering of politicians meant to get you to vote for them, and the fear-mongering of police meant to get you to bow to their every whimsical order, your chances of being killed by a terrorist are so low that most of you are more likely to be killed by accidentally inhaling a Pop-Tart. Ok. It’s not just Pop-Tarts. But you’re 1,064 times more likely to die from food or beverages going down your windpipe. That last-linked article also notes:

You’re Much More Likely to Be Killed By Deer, Cows, Dogs, Brain-Eating Parasites, Toddlers, Lightning, Falling Out of Bed, Alcoholism, Food Poisoning, Choking On Your Meal, a Financial Crash, Obesity, Medical Errors or “Autoerotic Asphyxiation” than by Terrorists

But the police haven’t yet figured out how to get you to obey them based on fear of these causes of death.

When it comes down to it, your compliance has nothing whatsoever to do with safety – not yours, and not even really the cops. It’s all about compliance. Doing what you’re told, unquestioningly, even if the orders you’re given are both contradictory, and illegal for the cops to give.

But most of us are okay with that. Most of us will do nothing to change that. Our leaders won’t change it, either.

Because, in the end, we’re talking about taking away opportunities for risk-free murder from sadistic, murderous cops who mostly kill black people, and, let’s face it, the systems were built by, for, and are still controlled by, white people. Because of this, white people have historically gotten a pass; we have seldom been at the receiving end of a cop’s bullet. Hell, the other day, I got pissed off at a cop who was blocking the roadway at a housing complex I was visiting, while writing something in his pad, and I essentially ordered him to get out of my way. (Yes. I told him to move his car. I did not ask. And I did not say, “Please.” But I’m white, older, and (I’m told) I carry myself with authority. He pulled his car to the side of the road, and I went on my way.)