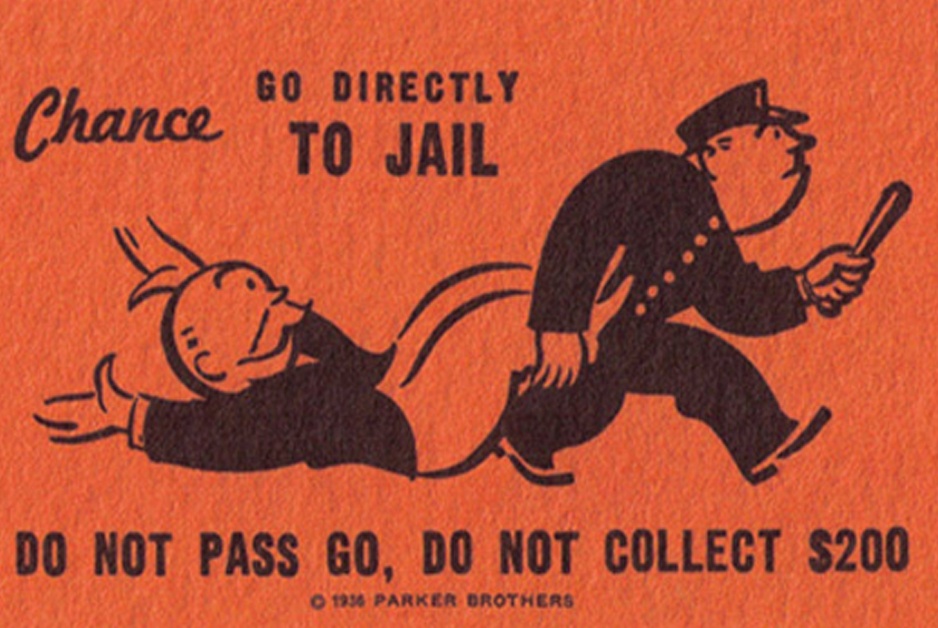 Rule of Law versus Rule of Man

Anyone who followed this blog in the past would know that I used to blog regularly. And then I didn’t. Now comes a New Year (caps required), and the requisite Resolutions, which may, or may not, be kept in coming days – I started to say “weeks,” but I have no idea if I’ll make it that long, or not.

Well, for starters, I got a little caught up in not just wanting to write things for myself all the time, and I seem to be unable to write in a way that interests others. Writing a decent blog post has always been difficult for me. Scott Greenfield, whose name must (by natural law) appear in almost every one of my blog posts, may be able to crank out 2-3 posts before breakfast. Mine are rung from me in ways never easy, and frequently painful. I’m just not as smart, or quick, or blessed, or whatever the difference is, as my friend.

But that’s only a small part of why I stopped writing. There are many other reasons, and all seem to my mind to coalesce around an overwhelming disappointment with what I’ve learned about our legal system – I don’t think I’ll ever call it a justice system again, even with scare quotes – since I started practicing law.

Before I went to law school, signing up just in time for 9/11 to begin in earnest the real tearing down of our legal system, I wasn’t actually expecting that I would be practicing criminal defense. After helping build the first two Internet companies in our part of California, I had reached the highest possible position I’d ever likely reach at the then-third-largest yellow pages publisher in North America, where I was the Director of Information Systems.

With that history, I expected that maybe I would become some kind of “tech attorney,” although I realize now that I had no idea what that might mean.

I’ve written about this before, so I’m not going to re-hash the details of how I ended up in criminal defense. Suffice it to say there was a dose of belief that I would be fighting for Truth, Justice, & the American Way. In fact, I’ve always been a huge believer in the earlier version of this meme:

Superman–defender of law and order, champion of equal rights, valiant, courageous fighter against the forces of hate and prejudice, who, disguised as Clark Kent, mild-mannered reporter for a great metropolitan newspaper, fights a never-ending battle for truth and justice.

But that did use to be, at least as a goal, the American Way.

I interned, for the most part, with a respected Criminal Law Specialist. [1]California offers specialist certifications to those who go above-and-beyond the normal requirements of just becoming an attorney, and he had it. But I also had my own office, where I took in motions-writing work from other lawyers. That really helped when I later became a lawyer, because I was able to start making a name for myself in the defense community.

More importantly, the criminal law specialist was very generous to me in terms of what he allowed me to do. Again skimming over some parts, I got to “sit second chair” on some special circumstances cases – which means cases where, if they wanted, the prosecution could ask for the death penalty; in particular, these were significant cases involving murder charges – and at one point I even argued before the Fifth District Court of Appeal. [2]We lost, but according to one of my friends who interned there at the time, the Attorney General who argued against me was deemed in need of further training for his performance against me. It was kind of a heady time: I got to do some really exciting work in criminal defense, but I didn’t really shoulder the responsibility the way an actual lawyer must.

And then I became an actual lawyer.

As I was now responsible for all aspects of any cases I took, I began to see all the muck with which the real lawyers dealt, which I had been spared as I played at being one in my interning, and motions-writing, work. I had seldom gone to “minor” hearings where we weren’t actually arguing a motion I’d written, or doing an actual trial. Now I was doing those “minor” hearings myself.

I use scare quotes around the word “minor” here because I’ve come to realize that frequently those “minor” hearings are where some of the real work of trying to resolve a case are done – and I’ve also since learned that nearly all cases are “resolved” without any actual trial, and very often without even a preliminary hearing (a hearing where evidence to determine whether there is probable cause to believe a crime was committed, and the accused committed it). Some of these “minor” hearings will involve chambers conferences, where the prosecutor in the black robe (judge), and the regularly-assigned prosecutor, team up to “discuss the case” with the defense attorney, to explain why the defense attorney’s client should eat whatever horrific sentence is being offered.

Stubborn defense attorneys, like me, will frequently try to present a legal reason in these conferences for why the prosecutor in the black robe, and the regularly-assigned prosecutor, are wrong. We try to explain the legal reasons why a better offer – or in rare cases, a win by dismissal or acquittal – is not an unreasonable expectation. In other words, we frequently try to argue that things are not quite so bad as the two prosecutors believe. We’ll quote court cases, because that’s what led us to believe what we’re arguing in the first place. Sometimes we’ll quote statutes, though these are often so vague these days that the two prosecutors can, and will, make of them whatever they want. I find that although it, too, is a weak weapon, I’m often better off citing case law. Sometimes, with some black-robed dudes, I’ll add in ordinary logic; some of them understand that at times.

Now some defense attorneys will (for reasons I’m not going to expand this blog post explaining) will stretch the law as much the wrong way in defending their clients as the two prosecutors will occasionally try to stretch it the opposite wrong way. [3]The two prosecutors don’t often propose legal arguments, which is why I word it this way. I don’t believe I do that. From feedback I get, I don’t think most people who hear me argue think that, either. To me, it’s counterproductive – because it only bolsters the two prosecutors’ positions – to try to argue that a particular legal concept supports the defense when it’s a stretch to say that. I like cases where you can find an actual paragraph, or at least a few sentences, that actually state the point I’m trying to argue.

There was, I’m told, a kind of Golden Age of Criminal Defense, where this strategy worked really well. For example, attorneys I know who have been in practice more than 30 years tell me that they routinely won motions to suppress evidence that had been illegally obtained. Those were the days when the Bird Court frequently struck down death penalty verdicts based on errors of law, back when the law still mattered. Those death penalty rulings, and the argument that Bird was “soft on crime” were the ostensible – but not actual – reasons the Republican right-wing went after her. Though a lot of the real opposition had to do with her perceived opposition to business interests, it was the “soft on crime” charge that was primarily used to whip up the electorate.

Those who actively opposed the re-election of Rose Bird adopted a standard that looked to the decisions made by the justice and whether or not the decisions upheld society’s desire for toughness on crime. Crime Victims for Crime Reform, led by, among others, the District Attorney of Kern County, stated that it was valid to look at the record of a justice. Crime Victims for Court Reform was one of three major organizations leading the fight against Bird in 1986. Others were Californians to Defeat Rose Bird, led by Howard Jarvis and Paul Gann, the authors of Proposition 13, and Bird Watchers Society, led by Republican Congressman William Dannemeyer. Each of these groups used money to publicize cases that they felt showed Rose Bird was soft on crime. An example is the case of Theodore Frank, convicted of kidnaping, raping and murdering a two-and-one-half year old girl. His death sentence was overturned when the court ruled that evidence used in his trial was seized as a result of an overbroad search warrant. The girl’s grandmother, co-chair of Crime Victims for Court Reform, blamed the court and specifically, Rose Bird. She stated:

Why investigate a case, go to trial, get a confession when regardless of what the crime is, or the penalty, Rose Bird is going to overturn it. Of course, they should review cases, but I don’t think they should turn loose ten murderers because of one that’s not a murderer.

Ads paid for by the anti-Bird forces described brutal crimes and said that “Bird let the killers go free.” [4]Patrick K. Brown, “The Rise and Fall of Rose Bird: A Career Killed by the Death Penalty” (2007), available at http://www.cschs.org/wp-content/uploads/2014/03/CSCHS_2007-Brown.pdf, last visited January 1, 2016.

As the article went on to note,

Of course, no killers went free; they stayed in prison to serve their sentences after their death sentence had been overturned.

It did not matter. The right-wing had won: “tough on crime” was the new ruling principle. The rule of law lost.

It probably did not help that then-governor Brown (in his first such terms as governor) was so oppositional to the judiciary that he failed to appoint so many judges. Once he was out of power, this left room for the appointment of more conservative judges, who did not need a lot of encouragement to adopt a tough on crime stance, because they already held it. The laws had not yet changed, but in just two years following the ouster of the Bird Court, California went from having the third lowest number of death sentences affirmed of all the states, to the eighth highest. Interestingly, the Supreme Court under Rose Bird, and the Supreme Court under Malcolm Lucas (her successor), almost always cited the same legal principles, the same precedents, but arrived at different conclusions. The Lucas Court did not even overrule, or even limit, many of the opinions of the Bird Court.

And so it continues today. The law frequently still says one thing, while judges do whatever the hell they feel is right – frequently something other than what the law says. Seldom does that come out well for accused people.

This is what the rule of man looks like. Highfalutin legal words say one thing, the people who make the decisions rule another. In the years since I became an attorney, that tendency has only accelerated as the world around me seems to shift ever farther toward a kind of right-wing authoritarianism that has little patience for legal principles that would – as the co-chair of the Crime Victims for Court Reform complained – follow Blackstone’s formulation, and allow innocent people to remain free.

I, for my part, grow sicker of it every day.