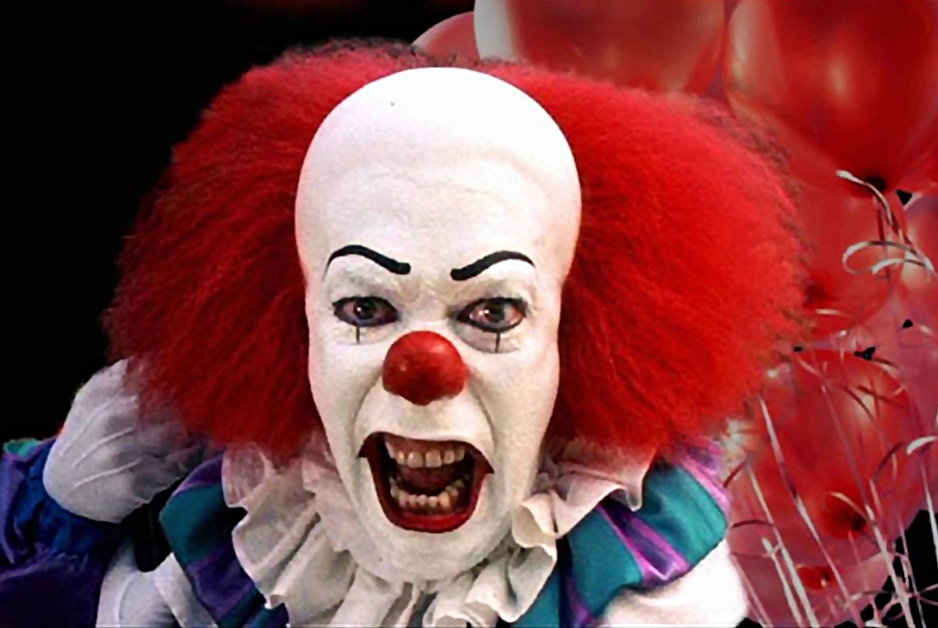 Send in the Clowns

Americans are freaking out over non-existent killer clowns. Again. This isn’t news. Not anymore, if it ever was.

Since the early 80s, there have been several localized rumor-panics in North America and Europe involving sightings of phantom clowns attempting to kidnap children. They have also been referred to as Killer Clowns and Kidnapping Clowns. At first glance, it would be tempting to think that there may be a group of criminals dressing up as clowns. Yet, when you examine the reports, a curious trend appears: they are almost never caught, and vanish into the shadows. There is also a lack of tangible evidence. All police have to go on is eyewitness testimony, which is notoriously unreliable, especially given that most witnesses are children. Another curious fact is that the children always seem to get away. The clowns appear totally incompetent. (Robert Bartholomew, Ph.D., “Phantom Clowns in South Carolina Are Nothing New: Killer Clowns From Your Imagination,” Psychology Today (August 31, 2016).)

But if there’s one thing people who relish moral panics hate, it’s being told they’re wrong.

I posted something about this idiocy—and that’s what it is, idiocy—on my Facebook page, and wounded idiots, such as a car washer from Texas, were so infuriated that they decided to try to ruin my online reputation by giving me 1-star reviews.

Let’s take a very brief sidetrack here: if you’re picking your attorney because of how many “stars” they have on Facebook, you deserve the prison sentence with which you’re likely to end up. And if you listen to car washers from Texas when deciding on hiring an attorney from California, you deserve what you get in spades. At any rate, I’ve fixed that problem: leaving reviews, either negative or positive, on my Facebook page is no longer possible.

So, back to the other clowns—the ones who don’t eke out a living washing cars in Texas.

Kids who used to never be a problem before, because they were so scared of the monsters hiding under their beds that they couldn’t get out of bed to bother the rest of us, now have access to the Internet.

Unsurprisingly, these kids—being complete failures in their own lives—need to disrupt the lives of others. One of the ways that they find the most entertaining are by scaring the shit out of as many people as they can. They might do it by campaigning for President on the idea that Muslims must be banned from the United States, and possibly put into interment camps if they’re already here. They might do it by trolling people online. Or they might make a few phone calls and swear that they’ve been attacked by the world’s most enigmatic clowns.

It’s like they’re trying to get even for all the times the boogeyman in their own closets caused them to piss their pants.

And the media is complicit in the spread of bogus reports.

People are telling the media and police that they’ve seen sinister clowns near forest, offering children money and luring them into the woods.

The clown sightings have continued for days, but so far, there’s no photographic or physical evidence of any malicious clowns.

Despite the lack of hard evidence, media in the United States, Canada, and overseas are running with the story.

The media, of course, isn’t doing this all by their lonesome.

“Everything had been on Facebook, with people creating these names like ‘LaGrange Clown’ or LaFayette Clown’ or whatever. Pick a city and put clown on the end of it,” said Sgt. Stewart Smith of the Troup County Sheriff’s Department. “All of that was over social media.”

But that’s how moral panics work.

Moral panics are not about reality: they’re about perception. Moreover, they are a natural product of a torn society, rather than any actual activities in the real world.

Events are more likely to be perceived as fundamental threats and to give rise to moral panics if the society, or some important part of it, is in crisis or experiencing disturbing changes giving rise to stress. The response to such threats is likely to be a demand for greater social regulation or control and a demand for a return to ‘traditional’ values. (Kenneth Thompson, Moral Panics 8 (1998).)

If ever there was a society in crisis, or experiencing disturbing changes, it is ‘Murca in 2016. The political divides between us, which have become extreme, make this clear. As David Post posted on the Volokh Conspiracy,

we are really, finally, collapsing into separate camps, each with its own favored newspapers, and websites, and TV news channels, and so on, and across whose boundaries nothing passes.

And with this collapse comes the event horizon, or, more accurately, a radical fear of anything outside of our own event horizon.

‘Murca is coming to the end of the second term—yep, second, because the majority thought he did a good enough job to deserve two terms—of its first black President, has seen unprecedented advances in the recognition of rights of gay, bisexual, transgendered and other individuals. Hillary Clinton has won the Democrat nomination, and—depending on which bubble you live in—stands a better than average shot at becoming the first woman President. Too many people who have been in the majority, and enjoyed a privilege they do not deserve because, though white, they are ignorant fucks, are individually shitting their pants, and collectively shitting on the real, if heretofore unrealized, ideals of the United States: a world where everyone can enjoy life, liberty, and the pursuit of happiness.

It is this type of milieu that specifically calls for—that needs, that craves—a moral panic. Moral panics are stress relievers for people who feel their world is spinning out of control. It provides a boogeyman on whom to pin their fears, and a target to punish them out of existence.

The rapidity of social change and growing social pluralism create increasing potential for value conflicts and lifestyle clashes between diverse social groups, which turn to moral enterprise to defend or assert their values against those of other groups. (Thompson at p. 11.)

The problem with moral panics, though, is that they distract us from working on real-world problems. While we’ve got our panties all in a bunch over phantom clowns, we’re not paying attention to real dangers, like cops who won’t quit killing unarmed black men because their SWAT trainers teach that you have the best sex of your life after killing someone.

Or, worse yet, we could end up with a few dead clowns. And perhaps a few more piss-poor laws, aimed at banishing phantom clowns in order to make us feel safe—which is, after all, the number two reason for passing new laws these days. (The primary reason being to continue to grow our new number one industry: the police state.)

In the end, I can’t help but think of Stephen Sondheim’s words regarding his song from the 1973 musical, “A Little Night of Music”:

I get a lot of letters over the years asking what the title means and what the song’s about; I never thought it would be in any way esoteric. I wanted to use theatrical imagery in the song, because she’s an actress, but it’s not supposed to be a circus […] [I]t’s a theater reference meaning “if the show isn’t going well, let’s send in the clowns”; in other words, “let’s do the jokes.” I always want to know, when I’m writing a song, what the end is going to be, so “Send in the Clowns” didn’t settle in until I got the notion, “Don’t bother, they’re here”, which means that “We are the fools.”