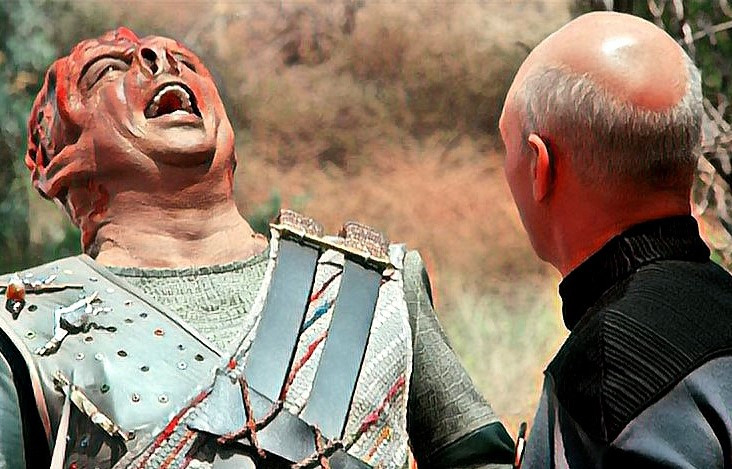 Shaka, When the Walls Fell

On the Failure of Political and Legal Systems

I’ve been a Star Trek fan since I was a kid, and one of my all-time favorite episodes is “Darmok.” from Star Trek: Next Generation, where we learn about allegorical speech, such as “Shaka, When the Walls Fell.” Perhaps it’s because language and languages fascinate me.

How do thoughts get from one mind to another? And what happens when they don’t make the trip through space from one head to another intact; that is, with the “original” thinker’s message accurately transmitted, received, and understood?

But Shaka isn’t just, or even primarily, about language; it is also a story of success, and failure: the “when the walls fell” part.

And two disparate civilizations trying to learn to work together, but getting there a little too late.

The United States is currently going through an existential crisis. The combination of coronavirus, a corrupt political system out of control, and cops who refuse to stop killing unarmed black men has, at times, made it appear we are a nation on our knees.

But it’s not that we’re deep in prayer. Hardly.

Something less than half of us are on our knees in obsequious adoration of an out-of-control egomaniac. Many of the rest are stunned and wondering if there will ever be an end to the outrage. Two disparate civilizations, and we are definitely not Darmok and Jalad at Tanagra.

Right now, I can’t really tell if all our walls will collapse because of Trump. But I do hope that in about a month, it will be Shaka for his Presidency.

Coronavirus has now killed more Americans than our last five wars, including World War I, where just over 116,000 died. Meanwhile, our Fearless Thoughtless Leader boasts about having defeated coronavirus: Mission Accomplished.

While over 214,000 Americans are now dead through his inability to lead, and constantly downplaying the devastation, Trump is not satisfied: now he has to try to personally infect people.

But he’s doing a great job. The best job. A perfect job. Those of us dying just don’t get it.

“On public relations I give myself a D,” he told Fox this week. “On the job itself we take an A-plus.”

If you buy what he sells — I don’t — Shaka, When Society Fell is just a problem of communication, rather than ineptitude leading to deaths from coronavirus, which will be approaching a quarter of a million by the time of the election. One model predicts that before Trump leaves office, deaths will reach close to a half-million.

Many deaths are unavoidable. Too many, though, are dead because of the corruption of this hands-on President. Maybe he’s gotten too old for “pussy grabbing,” but he has his smothering paws all over the science. His involvement has corrupted the independence of the CDC and FDA, among others. He has encouraged disparagement of expert opinion, lumping it in with his “fake news” theories, attacking when they try to tell the truth.

His corrupting influence has been responsible for untold numbers of preventable coronavirus deaths.

So far, he’s proving himself better at making walls fall than building them.

The Politics of Corruption

Of course, since Day One, the Grifter-in-Chief has brought a new level of corruption to the federal government. When he said he wanted to “drain the swamp,” what he really meant was that all that water — regulation — was getting in the way of he and his friends gaining greater enrichment.

Yet one thing Trump has repeatedly proven: when it comes to money, his circus bark is worse than his real-life bite. Except for places he drags the Secret Services’ deep pockets to, it’s hard to tell if he’s actually profiting much off the Presidency.

Much as he’s trying—and he’s definitely trying—Donald Trump is not getting richer off the presidency. Just the opposite. His net worth, by our calculation, has dropped….

Dan Alexander and Chase Peterson-Withorn, “How Trump Is Trying—And Failing—To Get Rich Off His Presidency”

Maybe that’s why so many Americans are attracted to him. Aside from his endorsement of white supremacy, the Supreme Leader is supremely full of high hopes, big dreams, and small returns. Just like his base base.

Despite rampant corruption, in the traditional meaning of the term, Trumpets don’t see it.

Peter Beinart, “Trump Has a Different Definition of Corruption“

The real corruption is ignored because of the base base’s view that purity has been corrupted. The base base praises Trump’s subversion of the federal government in the service of putting people of color, and women, back in their places. Trump appears valorous even delegitimizing the election.

And that doesn’t even get us to the decades-long slide into corruption of the Republican Party, which has abandoned all pretense at fair play in politics. I’m not trying to write a book here.

In thinking about the allegorical nature of Shaka, When the Walls Fell, I’m reminded of another post of mine that discussed language and law. There, among other things, a redefinition of “sheriff” and “state actor” occurred in order to bring qualified immunity to county officers.

A little redefinition and, ipso change-o, criminally-minded law enforcement officers now have their own state-manufactured expelliarmus protective spell with which to disarm their opponents.

Rick Horowitz, “It’s All In How You Define Things”

“Soon,” an article I’ve written for a statewide publication will come out, giving more details about qualified immunity.

Qualified immunity is one — but not the only — reason police brutality is now a culturally-ingrained thing for cops.

Donald Trump once said he could go out onto Fifth Avenue in New York, shoot someone dead, and no one would bat an eye: he wouldn’t even lose any voters.

But all around the United States, cops do that on the daily, and lose nothing — not even their jobs. And when someone sues, judges grant qualified immunity — sometimes against their own sense of justice — and it’s Shaka, When the Walls Fell for the plaintiffs.

Encouragement from the Top Down

But there’s another reason police brutality worsens: encouragement from the top.

“When you guys put somebody in the car and you’re protecting their head, you know, the way you put their hand over?” Trump said, miming the physical motion of an officer shielding a suspect’s head to keep it from bumping against the squad car.

Mark Berman, “Trump tells police not to worry about injuring suspects during arrests”

Despite the disavowal by police leaders across the nation, and the International Association of Chiefs of Police, the rank and file has almost certainly been encouraged by this. I know their unions were.

At a time when law enforcement is perhaps the only issue that divides Americans more than the presidential election itself, a notable number of police and immigration officers are throwing their weight behind his candidacy — at least through their unions and associations.

Nevertheless, a scary number of cops love the Donald.

Though reliable polling is hard to come by, all indications are that rank-and-file law-enforcement officers support Trump; several unions, including the Fraternal Order of Police, endorsed him in 2016.

David A. Graham, “Trump’s Fantasy Vision of the Police”

Come November, if things don’t go his way, they could decide to bring the walls down.

In each of the arenas I describe above, we see two major points of view. Mask wearers versus maskholes. Coronavirus is a hoax that somehow the President caught, and then he beat it. Or maybe he never had it.

I’ve already talked about the differences on corruption. Maybe Trump could go out on Fifth Avenue, shoot someone, and not lose any votes. Maybe he couldn’t. But as long as he does his part to “make America great again,” I’m not taking any bets.

And cops? As long as they keep perceiving threats, even where threats are obviously impossible, they can shoot a man on Fifth Avenue, in his own backyard, or at the local gas station, even though he is a pillar of the community, and did nothing wrong.

“When police arrived, I’m told, he raised his hands and attempted to explain what was going on,” Merritt wrote on Facebook. “Police fired tasers at him and when his body convulsed from the electrical current, they ‘perceived a threat’ and shot him to death.”

Tim Elfrink, “A Texas cop killed a Black man called a pillar of the community.’ Now he’s charged with murder.”

Well, maybe that last one will be deemed to be one of those rare “bad apples” that don’t spoil the whole bunch, girl.

Maybe I’m just feeling pessimistic today, but it seems to me the most serious problems plaguing us — the deep divisions, the coronavirus, and the shoot-first-investigate-later police, who freely embrace killing both black and white — are never really going to go away.

Which makes it all the more important that we learn the lesson from Picard and Dathon at El-Adrel, and work together. Keep fighting.

Or it’s Shaka, When the Walls Fell for the United States.