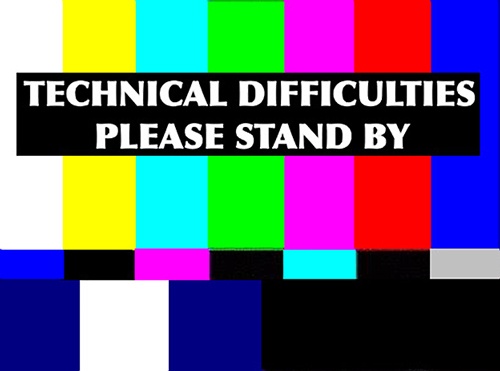 My plans to return to Donald Trump, and his impact on the criminal legal system – I no longer really think it’s proper to refer to it as a “justice” system; it’s not even really a system of law – have been somewhat modified by technical difficulty: the announcement today that President Barack Obama has put forth Merrick Garland as his pick to replace “Justice” Scalia on the United States Supreme Court.

I say “somewhat modified” because, although the news means my post will not re-focus on Trump, there is a connectedness between what I was going to say, and what has happened.

You see, back in the day, a candidate by the name of Barack Obama ran on a platform of “Hope,” and “Change.”

Turns out, those were just technicalities.

You know, like truth, honor, justice, and all the other things the United States of America has been shedding like so-many worn-out rattlesnake scutes, as the serpent grows ever larger, and more dangerous.

Yes, it’s official. The rule of law, due process, and the United States Constitution are officially technicalities.

Now, since I ran across that tweet, a new one has been posted which aims at giving the first one “context.” The second one – said to be President Obama’s full quote on the topic – as the tweeter noted, is “[w]eird but not as bad as it seemed.” 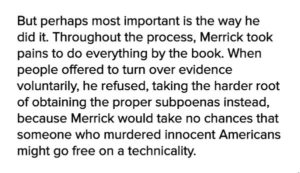 Unless you’re bothered by the fact that it appears the nominee is an idiot, and that the President is apparently endorsing the view that the rule of law, due process, and the United States Constitution are just technicalities meant to free “someone who murdered innocent Americans.”

Scott Greenfield spent 30 seconds [1]I’m just going off the word count, and knowing what Scott normally writes. to comment on the nomination, saying that the nomination itself is a technicality. [2]Those are my words; not Scott’s. There may be squawking. This isn’t, Scott posits, the nominee President Obama would really want. It’s just a test – albeit one that could easily blow up in the President’s face – to “test the mettle” of a Congress that has sworn to avoid its duty, in that they peremptively stated they would not consider any nominee of the current President because they hope to have a Republican President next year, and thus a potentially more-palatable nomination.

Or at least one who wasn’t nominated by the Obama.

There is no question that he’s qualified to serve as a Supreme Court justice. Whether he’s your cup of tea is another matter. Whether you think he’s the sort of justice you hoped President Obama would nominate depends on your priorities. He’s not my kind of justice, but so what? I’m not president so I don’t get to pick a judge who isn’t highly deferential to law enforcement.

Me, neither. But I had hoped, when I voted for Obama for a change. The first time because he said that was what he was bringing; the second, because I figured surely since he doesn’t have to run again, he will have more courage to do the right things.

But, you know the saying,

Fool me once, shame on you. Fool me twice, you must be a politician running against even less bearable alternatives.

And the President should know whether or not these are technicalities:

I was a constitutional law professor, which means unlike the current president I actually respect the Constitution.

Now, before getting to the question of “How can an alleged constitutional scholar – who supposedly taught constitutional as a law professor – call these things technicalities?,” let’s get to what we’re actually talking about.

Merriam-Webster Unabridged – when we get such wonderful words as “obnubilate” – defines a technicality as,

a small detail in a rule, law, etc., and especially one that forces an unwanted or unexpected result

One might argue whether the Constitution of the United States of America is “a small detail,” or not. But it does contain a bunch of details. Most of those details were intended to create a limited federal government, as a kind of glue that held the original ratifiers of it together.

Over the years, that limited federal government has gradually – although the speed has increased dramatically since the beginning of the 20th century – chipped away at those details. In the process, it has both given itself increased power over the lives of citizens, and eliminated the small details that acknowledge our freedom as spelled out in the original 10 Amendments quaintly known as “The Bill of Rights.”

We’ve hardly noticed the rights we’ve lost, though, because we’ve come to recognize that these are mere trifles. Their primary utility is to encourage criminals, and to cause us to develop inappropriate fetishes about our phones.

Well, okay, some of us are still hung up on the privacy thing. But we’ll get over it.

By force, if necessary.

If you stop, and think, about the information above – and I dare anyone to show that any of the facts I’ve stated are incorrect – you should have a pretty good idea of the kind of “justice” Merrick Garland would make, and why his nomination puts the final nail in the coffin of Candidate Obama’s so-called “Hope” and “Change.”

In 2003, for example, Garland joined an opinion holding that the federal judiciary lacks the authority “to assert habeas corpus jurisdiction at the behest of an alien held at a military base leased from another nation, a military base outside the sovereignty of the United States” – an opinion that effectively prohibited Guantanamo Bay detainees from seeking relief in civilian courts.

ThinkProgress – not always the most reliable source, but here I have no reason to doubt them on this point – also notes:

The former prosecutor also has a relatively conservative record on criminal justice.

The article then goes on to say that he’ll probably turn out to be a progressive, anyway, and vote with the liberals on the Supreme Court. Though why they think that, even after they quote “retiring liberal Justice John Paul Stevens” as suggesting otherwise, is beyond me.

It is unsurprising that Garland is not likely to be a progressive. His background, and training, militate against it.

And his heart? The thinking that drives him? What best prepared him to be a federal judge in the first place? When asked during confirmation hearings for his nomination to the D.C. Circuit Court in 1995, he stated:

I think being a prosecutor. The great joy of being a prosecutor is that you don’t take whatever case walks in the door. You evaluate the case, you make your best judgement, you only go forward if you believe that the defendant is guilty. You may well be wrong, but you have done your best to ensure that as far as the evidence that you are able to attain, the person is guilty. It is the kind of even-handed balancing that a judge should undertake although of course a judge has the advantage of having somebody speak for the other side. I think there is no greater job anybody can have than having been a prosecutor.

As has been repeatedly shown, in such places as Orange County, for example, prosecutors evaluate cases, make their best judgments, and only go forward if they have a properly-installed snitch program. And by “properly-installed,” I mean well hidden enough to prevent defense attorneys, and judges who didn’t come up through the Orange County ranks, from knowing that it existed for at least a couple, or more, decades.

Not that the problem of prosecutorial misconduct has spread much farther than Orange County, mind you.

Garland’s history as a prosecutor does not mean that he’s incapable of bringing the kind of hope, and change, the criminal law system in the United States so desperately needs. After all, all of the links in the last paragraph are to stories of judges who reversed cases based on prosecutorial misconduct, and there’s a likelihood that at least some of the judges so doing were once prosecutors themselves.

After all, for at least the last few decades in the United States, the surest path to a judgeship has been through a District Attorney’s Office – and the more “law and order” history the prosecutor has, the better the chances at becoming a judge.

But with Garland’s history of ruling in favor of his former brethren on the prosecution team, I wouldn’t be holding my breath for any hope of seeing repair to our tattered Bill of Rights, nor any change in the idea that the Constitution is, after all, just a technicality, good for nobody but criminals, and nothing but providing them protection.