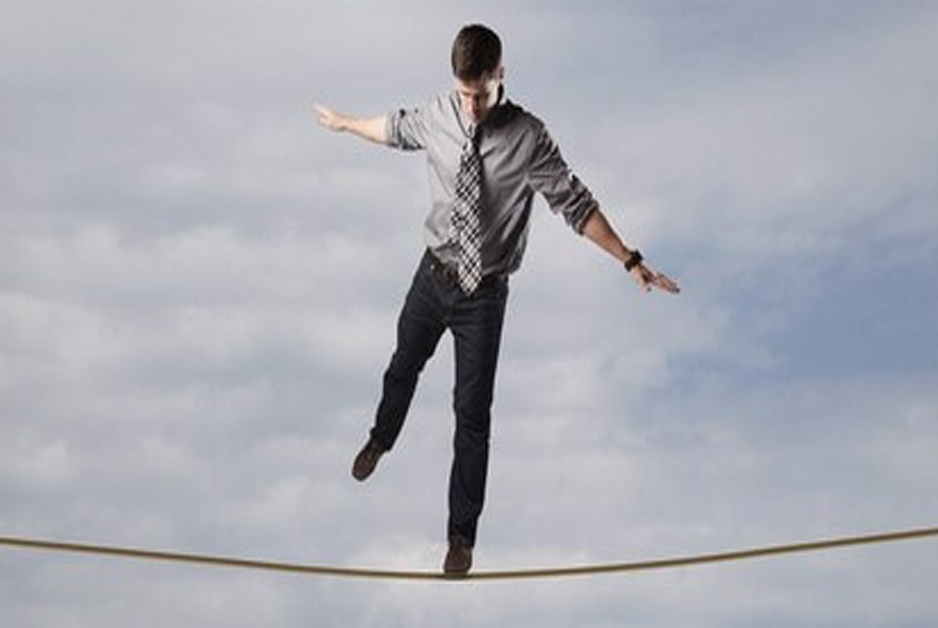 From the ancient Greek philosophers to contemporary guru of goal achievement Brian Tracy comes the lesson: if you want to be something, act as if you already were that something.

Quality is not an act, it is a habit.

But how do you develop that habit? How do you get to where you aren’t just pretending something? At times, you just have to start with acting.

By using the “act as if” method, you walk, talk, and carry yourself exactly as you would if you were completely unafraid in a particular situation. You stand up straight, smile, move quickly and confidently, and in every respect act as if you already had the courage that you desire.

Acting “as if” is not about faking, though. It’s about striving. As the American philosopher, William James said,

If you want a quality, act as if you already had it.

Or, as is frequently said in the modern world:

Fake it until you make it.

The thing I wanted to be most as I neared the end of my time at law school was something that I only partly had to fake. I wanted to be the best lawyer around; a definite cut above the rest.

As I said, I only partly had to fake things. Until I learned the ropes, I had to pretend that I knew what I was doing — and bust my nuts at night learning, preparing, and making sure I didn’t screw up when the time came to fight for my clients.

But I didn’t have to fake caring.  I naturally cared about my clients. Their concerns were my concerns. In fact, often, I found, I had more concerns than they did, because I understood the ramifications of the situation they were in better than they did. So I spent a lot of time with my clients. The term I’d heard many attorneys use — “handholding,” as in “I don’t have time for handholding” — was a term that I embraced.

And I made the time for it.

Hours and days dissipated as I tried — sometimes in vain — to ensure my clients fully understood their cases, their situation, their real options, and the likely outcome if they did this, that, or some other thing with their case. I adopted and strongly held an attitude that I was not going to tell my clients what to do. Too many times I had talked to people who complained that their attorney had coerced them into taking an offer that they regretted having taken.

And I had seen such things myself. I had seen accused people in courthouses — particularly in outlying communities without real public defenders; i.e., those like Kings County where contract attorneys are alleged to be unlikely to get their low-paying contracts renewed if they piss off the court — who did not understand the charges against them, who did not know what their “attorneys” were talking about, being told, “This is what is going to happen in your case. You’re going to plead guilty to [insert crime] and be sentenced to….”

That won’t be me, I said. My clients will make their own choices. They will know what their charges are. They will understand their options. They will be responsible for their own decisions. I told my clients this:

At the end of the day, if you take a plea, you know what I’m going to do? I’m going to go home and have a glass of wine.

At the end of the day, if you don’t take a plea, you know what I’m going to do? I’m going to go home and have a glass of wine.

If we lose at trial, you know what I’m going to do? (By now they’ve usually gotten the picture.)

You, however, are going to live with the consequences of your choice. So you really need to understand what your options are, and what will happen if you choose this way, or that way, or that other way.

And as my practice grew, and my clients made their choices, the number of glasses of wine I found I needed at the end of the day grew, also.

Because it’s not that I don’t care about my clients. Quite the contrary!

If it’s possible, I’ve come to the conclusion that I care a bit too much.

I’ve come to realize that some — just some, unfortunately — of those attorneys who I have looked on as being callous, hard-nosed, uncaring, were not that at all.

They were just protecting themselves. Maybe they were always able to be that way. At least in part, it’s a boundary issue, and some people are very good at knowing where the boundaries should be set.

I think I’m pretty good at understanding boundaries. I know I’ve been pretty good at teaching others how to set boundaries. I’ve watched more than one person entangled in a boundary-less and toxic relationship go on to extricate themselves and achieve great things after numerous conversations with them on the topic. Maybe I just haven’t been as good at setting them, though. Maybe it’s been a case of “do as I say; not as I do.”

At any rate, it’s catching up with me. Some will say it already caught up with me. “No accident,” they say, “that you had a heart attack just five years into your practice, and at such a young age.” Nor is it any accident that I’ve drunk enough of those glasses of wine over the last few years to add a hundred pounds more than I need to be carrying. (No one seeing me ever believes it. “You carry your weight well,” they say. Unfortunately, I don’t carry it so well. I may not look bad, but I too often feel bad.)

A friend recently said to me,

As much as we can do, we can’t save them from themselves. We’re lawyers. We’re not god or magicians.

I noted that I wished I had his groundedness and perspective. He responded by saying,

It’s the only way to do the job and retain your sanity. You’ll get there.

Because here’s what I’m learning: after awhile, forgetting that I’m a lawyer, and not a god or a magician, not staying grounded, not maintaining perspective — not retaining my sanity — will not just hurt me. So far, I can thank god that I’m the only one who has really suffered. But if I don’t keep these things in mind, I fear my clients will suffer.

I’m trying harder these days to set client expectations. You really can’t go out, shoot up someone’s house in a gang turf war, and then expect that I’m going to be able to get you released from custody on your own recognizance while we wait until I get your case dismissed. I don’t really think there exist attorneys good enough to do that, and your constant complaints about my inability to change the county bail schedule in your case won’t change that fact. If I tell you that you have to be in court on a certain day, at a certain time, your surprise at the judge issuing a warrant for your arrest is trumped by my surprise that you forgot I told you that would happen. If you are told that you have to do certain things, or your fines will not be cut in half, your failure to follow through on that does not make me a bad lawyer when your fine is not cut in half.

I’ve been performing this empathic high wire act for some years now. I did not need the advice of philosophers and self-help gurus telling me to act like I cared about you, and your case, because I really do care about you, and your case. I’ve never had to act like I care to develop the quality of caring, because caring has been a habit of mine for quite some time now. It’s why I became a criminal defense lawyer in the first place.

But I’m beginning to recognize that I’m going to have to start acting in a way that some of you might interpret as making me “just like other lawyers.”

If you’re talking about the successful lawyers, the ones who fight for you even if they don’t always seem to hold your hand as much as you’d like, then you might be right. If you’re talking about lawyers who protect themselves from becoming too entangled in the things about you that may be why you got into trouble in the first place, you’re absolutely right. Doing that does not — will not — mean that I don’t care about my clients. I will continue to care, to hurt, to suffer along with you — to a certain extent. But I’m not going to accept that when you make bad decisions, or you don’t follow through on the things I manage to arrange for you — to keep you out of jail, to prevent you being taken from your family, to keep your fines from doubling — it’s somehow my fault.

Because here’s the thing about the empathic high wire act: if I don’t care enough, I’m not going to be on that wire; but if I care too much, I’m going to fall off. And when I fall off, I’m not the only one who gets hurt. So sometimes, I’m just going to have to act “as if” I don’t care so much.

You’ll just have to trust me on this one: It will always be acting.