Within the last month, a number of disturbing events have been brought to my attention. Two are quite recent.

The 911 call is accusatory. The woman flatly tells the dispatcher she just witnessed several police officers in East Bakersfield, California, beat a man to death.

Two Sacramento police officers are on routine paid leave after cell phone video surfaced showing an officer striking a suspect with a baton moments before the suspect died.

These are the most violent and blatant executions in recent California history. Not since Manteca have the police been as brazen about the assassination of unarmed citizens.

Manteca was not the fault of police officers. The officer who fired 13 bullets in 4.2 seconds was temporarily made blind by testosterone and had to shoot because he imagined he could see…a knife.

Moody and police claim that the officer saw a knife in Duenez’s right hand, which is not visible on the video. Moody said he feared the man might throw it or charge at him, however, the Duenez family’s attorney contends that Duenez was unarmed.

…Moody was cleared from wrongdoing. The District Attorney’s office decided that Moody was justified in shooting the man.

So the song began.

It continued in Sacramento, where “we don’t know why [a man struck in the head 10 times by a police woman swinging a baton with both hands] died.”

Regardless, the police say the officer who struck the man 10 times in the head with her baton was justified, as officers feared for their lives, since he was only pinned down, unable to move, and may have been holding a cell phone.

Speaking of cell phones, in Bakersfield, David Sal Silva did not die from multiple police dog bites, or strikes from three deputies beating him with batons, having his wrists and ankles tied together behind his back while he was beaten by the officers’ batons, or any aspect of the struggle itself.

Their version of the story, of course, is buttressed by the fact that they chased down all the witnesses who filmed them murdering a fellow citizen, confiscated their cell phones, and somehow discovered that the video on those cell phones didn’t actually exist after all.

And so we are deprived of any improvisational pieces recorded by the public.

Instead, as in every other case, the police played for the public their exquisitely honed and rehearsed musical piece. 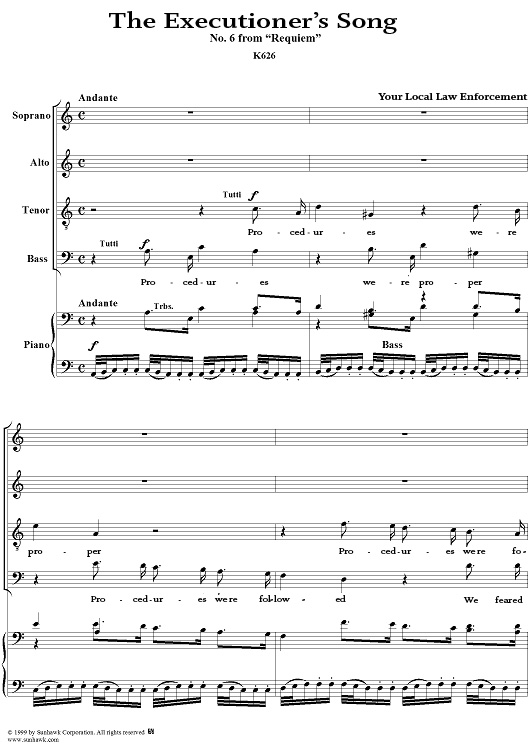 Fourteen Americans have been killed by police as of May 31, 2013, in the most routine cause of citizen death: misbegotten drug raids that target the wrong home, wrong people. I don’t have the number for the total number of Americans killed by the police for other purposes, like entertaining themselves.