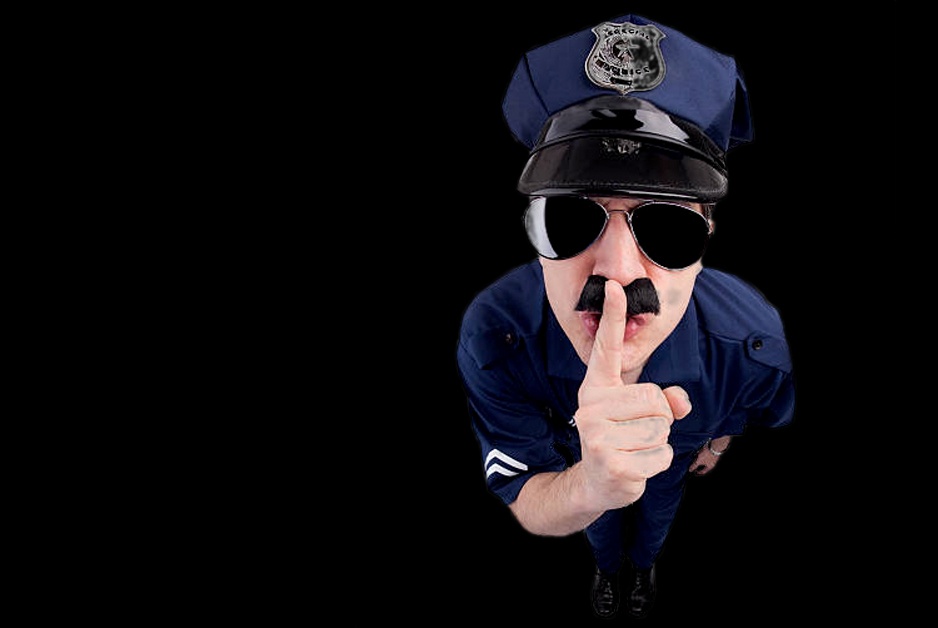 The Sound of Silence

The Sound of Silence.

The song written, performed, and made famous by Simon & Garfunkel — according to Simon in an NPR interview — had no deep meaning when written. That hasn’t stopped others from imbuing the words with meaning. When I’ve listened to the song, I’ve always thought the words resonated with the meaning of people being forcibly silenced by stronger interests.

Today, there is no dearth of dangerous voices trying to drown out those with whom they disagree by forcibly silencing them.

In fact, just this morning, Gideon posted about one particularly insidious form of silencing those who are already being coerced to give up other freedoms under threat of…even more serious deprivation of freedom. It involves offering a plea agreement — which a Kentucky court correctly identified as a contract of adhesion, rather than any true agreement — which not only silenced a potential appeal based upon ineffective assistance of counsel, but actually also required counsel to engage in unethical speech, as part of effectuating an acceptance of the offer.

Gideon makes the perhaps unintentionally-ironic joke that the judicial opinion on which he is commenting comes from “the ‘You Don’t Say’ chronicles.”

Scott Greenfield, probably my favorite writer not only because of what I learn, but because I’m in awe of his never-out-of-ammo machine-gun blog — I never want to get into a writing competition with that dude, because for every paragraph I write, he seems to easily crank out three full articles — anyway…in typical Scott fashion, two of the three shots he fired today deal with trying to silence people on the Internet.

In “What’s Worse Than Anonymous Trolls?,” Scott discusses the intellectual dishonesty of Danielle Citron, a law professor from the University of Maryland. As Scott points out, what it particularly insidious about Citron’s approach is that she pretends to favor freedom of speech — giving her nod to the United States Constitution’s requirement that the government honor the unalienable right of every individual to it — but her real argument rests on a foundation that says only certain types of speech (hint: those she approves) are worthy of First Amendment protections. Citron particularly targets anonymity, [1]And presumably pseudonymity, as well. with the idea being that if someone says something that is deemed unworthy of constitutional protection, the person who said it needs to be unmasked, presumably so they can be punished in some way for their unworthy speech.

Publius, one guesses, might get a thumbs up — particularly for the opposition to the Bill of Rights — but I fear for Philadelphiensis.

As Scott notes, Citron would re-label anonymity as a “privilege” rather than the “unalienable right” that it is under the United States Constitution.

Citron’s blameworthy bugaboo is hateful, hurtful speech. It is this, she says, that must be handled.

And by handled, she appears to mean that it is speech which must be criminalized, and silenced.

I hope the example she uses in her article isn’t really the kind of speech she wants to turn into a crime, because to do that would require completely abrogating the First Amendment: even Citron notes that the speech of her anecdote is “routinely protected expression.”

Trolling — like the kind of exploitative abuse spewed against Zelda Williams on Twitter after her father’s death last week — is often nasty and hurtful. But it is routinely protected expression. Internet users are free to use words and images to get a rise out of others, even at their most vulnerable. In this case, two individuals tweeted photographs of dead bodies to a young woman and wrote that her deceased father would be “ashamed” of her — forcing her to quit the service altogether. These acts are offensive, disturbing and mean-spirited, and yet, they are examples of constitutionally protected speech.

There’s a better way to deal with “hate speech,” as the Hit & Run blog over at Reason points out.

That’s why you’ll never hear people like me, or Scott, or Gideon, or any other of the number of freedom-loving thinking people calling for the censorship even of intellectually-dishonest lawprofs. What you will see is us arguing — explaining with reasons, for the non-lawyers reading this — against the ideas they promulgate, and possibly trying to convince them that they might want to reconsider things.

It’s called “convincing,” or “persuading,” but that’s us — arguing person-to-person, or putting up our ideas against the ideas with which we disagree: not trying to punish, or silence, those people, or using the power of the government to prevent the media from publishing their ideas.

“It’s not the media’s job to use its iron fist to enforce social norms in our society,” suggests Justine Tunney. Nor should progressives (or anyone) want it to be! At least not if they care more about achieving actual change than getting points for saying the right thing on Twitter. Shifts in thought and social stigma occur not by those with the “wrong” ideas keeping quiet while those with the right ideas sit around congratulating themselves. If the wrong ideas really are that abhorrent, we shouldn’t need to hide them to discredit them.

If silencing ideas with which we disagree were permissible in America — in other words, if it were not for the First Amendment — African-Americans might still be slaves; women might still be disenfranchised; gays might not be making headway in the quest for freedom. In more ways than one, America would be a very different place.

But as Scott’s other article dealing with speech issues today points out, it’s not just the nannies, and the busybodies, we should worry about. Our own democratically-elected government, allegedly of the People, by the People, and for the People, is ever eager to test the limits of the People’s tolerance for circumscribing the First Amendment.

In “PSA: Stop Helping the Bad Guys, You Twitterers,” he talks about the cutely-named “TweetSmart” campaign in the State of Washington, where law enforcement is “asking” people “to stop tweeting during shootings and manhunts to avoid accidentally telling the bad guys what officers are doing.”

Because, as Scott points out — using nicer language than I employ here — it really fucks things up when criminals stop to check Twitter in the midst of a chase, and thereby manage to evade police.

As the original Associated Press article — in a quote also highlighted by Scott — mentioned:

Seattle photographer Michael Holden said he saw a direct path between asking people not to share crime photos and eventually forbidding them to take them.

A—-yup! It is a direct, short, and often quickly traversed path.

One repeatedly crossed by the police in Ferguson, Missouri.

Stopping people, including reporters, from taking pictures was very much in evidence in Ferguson the last two weeks. This demonstration — by the police; I’m not referring to that of the protesters — was ironic in that police proceeded as if there were no First Amendment, in order to run roughshod over nearly every other portion of the Constitution that should have prevented them from doing just about everything they did there.

Silence — particularly governmentally-enforced silence — is the death of a free democratic republic.