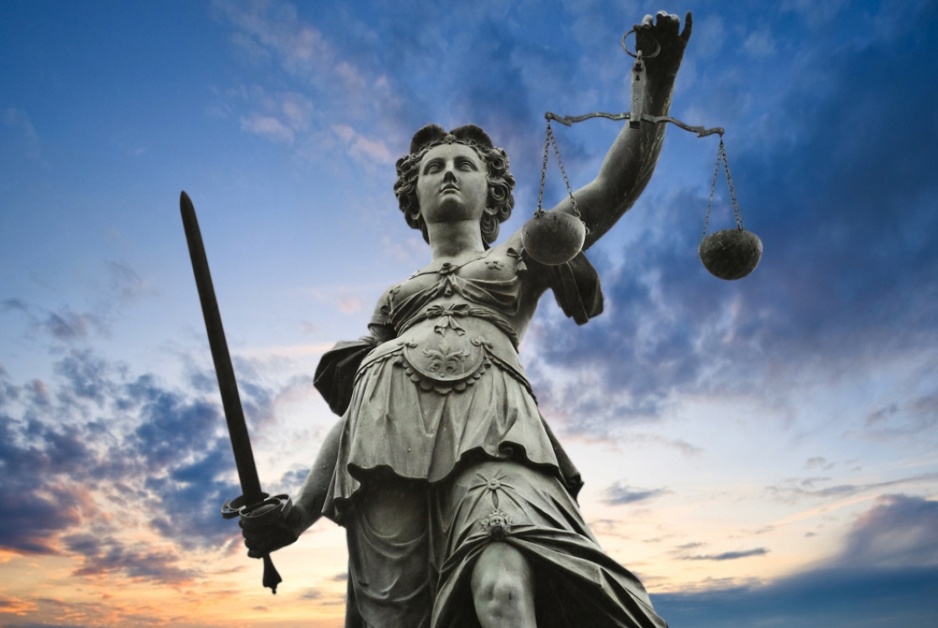 The Unbearable Meaninglessness of Justice

While trawling the Internet, trying to decide what to write about – because having a blog means it’s always begging for content, and however poor my writing skills may be, they still cry out for a walk now and then – my eye dropped upon this gem from Judge Kopf:

Lawyers and judges should do law and only law. Indeed, they should consign the word “justice” to the garbage dump of words without meaning. The legal profession and the judiciary should leave “justice” to the great minds who have struggled for over a millennium to define the meaning of the word.

It was on Scott Greenfield’s blog, though, so…yes, I’m allowed to blog about it. [1]For those who don’t know, Scott has to somehow factor in to pretty much every post on my blog, or, I think, the Universe comes to a screeching halt. Or something.

And speaking of screeching, [2]You didn’t read the first footnote, did you? it gives me the opportunity to puzzle my way to another screeching headache over the topic of “justice.”

I quit referring to the criminal court system as the “criminal ‘justice’ system,” even with scare quotes, a while back. As I explained then, the system is not really about justice. There is nothing about the system that is remotely related to justice.

But this creates a problem. Well, a number of them actually.

For one thing, what is the job of prosecutors? According to the Criminal Justice Standards for the Function of the Prosecutor,

a) The office of prosecutor is charged with responsibility for prosecutions in its jurisdiction.

(b) The prosecutor is an administrator of justice, an advocate, and an officer of the court; the prosecutor must exercise sound discretion in the performance of his or her functions.

(c) The duty of the prosecutor is to seek justice, not merely to convict.

(d) It is an important function of the prosecutor to seek to reform and improve the administration of criminal justice. When inadequacies or injustices in the substantive or procedural law come to the prosecutor’s attention, he or she should stimulate efforts for remedial action.

In the article where I first posted this, I talked about the disconnect between the idea of what prosecutors’ duties are said to be, and what prosecutors seem to actually believe them to be.

In addition to this description of the work of prosecutors, it probably doesn’t help Judge Kopf’s point that others – not me, and maybe not him – refer to our system as either “the,” or “a,” “Criminal Justice System.” Usually with capitals. Recently, when I tried to list myself on Google+ as a “Criminal Defense Attorney,” I found there was no such option. Nor could use I use “Criminal Defense Lawyer,” or any variation thereof. The only choice that was available was “Criminal Justice Attorney.”

Consider, too, that whenever anything goes wrong, everyone – cops, politicians, ordinary people – are screaming about the need for “justice.”

Finally, look at the dictionary definition for “criminal justice system”:

noun
a series of organizations involved in apprehending, prosecuting, defending, sentencing, and jailing those involved in crimes – including law enforcement, attorneys, judges, courts of law, prisons

Yet Judge Kopf is so obviously right that I almost find myself wondering why I’m writing this blog post. Lawyers should, as he says, give up on “justice.” In that sense, modern prosecutors are just ahead of the curve. The word is, as the Judge notes, meaningless. It is intoned like the words spoken by priests, to make people think that murmuring to themselves in their church pews actually has a real impact on the world.

Looking to our system of words which range from more-to-less-meaningless [3]Because, these days, we don’t really have laws anymore, either; just a system of words available for judicial interpretation, and reinterpretation, to allow judges to adapt “the law” to fit their perceived need at the time of interpretation; in short, a rule of persons, not of laws. for “justice” is about as futile as expecting that your susurrations to mythical beings can change things in the real world. Such purring may persuade you, or someone else, to alter their behavior on occasion, and in that sense it might actually work. But that has nothing to do with being heard by a mythical being who then steps in to provide whatever you thought you needed.

Similarly, taking our problems to buildings called by the government “courthouses,” and sometimes containing labels with the word “Justice” above their entrances may have the effect of bringing you satisfaction on a particular matter, or not.

Words will be intoned, to be sure. As with other prayerbooks, most of the intonements have been codified, and are referred to as “laws.” Sometimes those laws are “substantive,” meaning that judges will decide they have some particular meaning, and will try to explain those meanings to juries. Juries will then decide how they feel about what they thought the judge said, and how they feel about what the person brought before them did, and, acting on their feelings more than any “laws,” go from there.

Afterwards, Monday-morning quarterbacks – most of whom heard none of the evidence; nearly all of whom are not lawyers – will decide how they feel about what the jury, or judge, or lawyers, or other players in the production did. Riots may ensue. Letters may be written. Death threats issued.

Other laws are “procedural,” and allow judges to find alternative ways of screwing people without the need for even the farcical “trial” described above, sometimes thereby avoiding the riots, letters, and death threats.

But as Judge Kopf rightly notes, these are the things with which judges and lawyers should concern themselves. And they have nothing to do with “justice.”

Whatever that may mean.

Therein lies some of the difficulty. As the Judge also noted, the definition has been argued for millenia. I might add that it has been an unhappy discussion from the start. In Plato’s Republic, Socrates argues over the definition with several people, and none of them ever come up with anything satisfactory.

Things haven’t gotten any better since then. If anything, they are worse. Aside from the fact that “justice” is, as the Judge puts it, essentially [4]You’ll get why I inserted this wiggle word by the end of the article. a garbage word without meaning, everyone not only believes differently – including, Judge Kopf notwithstanding, a shitload ton of judges – but each individual believes they know exactly what “justice” is.

Most of the time, the definition these folks come up with includes stricter sentences, more prison time, greater destruction of individual lives and, ultimately, of society.

If you’ve been paying attention, you’ll notice that I’ve not (yet – but stay tuned!) offered up any definition of “justice,” either. To a certain extent, I agree with the Judge: it’s just a garbage word without meaning. Individual users of the word, if they imbue it with any meaning whatsoever, do so subconsciously, or preconsciously, or something. And it’s doubtful that they even know what they’re trying to say.

But “justice” isn’t the only wiggle word in our inaptly-named system. When you get down to brass tacks, it turns out that there aren’t any brass tacks. The entire system is built up of wiggle words. The more important the term, or phrase, appears to be, the more likely it is susceptible to numerous interpretations.

You would think this would cause us to inject a little humility into the system. You would think that those of us who think – especially judges who sentence people – would, recognizing the imperfections in the system, and the imperfections in themselves, and perhaps thinking ahead to what kind of world would result from their actions, might stop for a second. Question the whole thing. Maybe putting people in prison is not only not capable of effectuating justice, but maybe it is actually more harmful to society than not putting people in prison.

I am persuaded that the institution of prison probably must end. In many respects it is as intolerable within the United States as was the institution of slavery, equally brutalizing to all involved, equally toxic to the social system, equally subversive of the brotherhood of man, even more costly by some standards, and probably less rational.

Nor is Judge Doyle an anomaly in recognizing the harm that this form of “justice” – imprisoning people – brings.

For years, I have condemned the prisons of America. I have always said that the prison system as it exists in America today, should be abolished. As I have grown older, I have seen no reason to change that view.

Nor are they the first (or last) judges to come to this conclusion. The Minutes of the 1870 Congress of the American Prison Association/American Correctional Association contain a statement regarding one Judge Carter, of Ohio:

Any system of imprisonment or punishment was degradation, and could not reform a man. He would abolish all prison walls, and release all confined within them…

Prisons have never worked. Never will. That’s why prisons should be abolished. Judges should recognize, as Judge Persky recently did in a controversial decision – controversial because the mob that is America did not find the sentence harsh enough – that prison is not the best alternative, even for severe crimes.

Attorneys and judges will often talk about how sending people to prison simply turns them into better criminals. There is some truth to this. Skillsets are developed in prisons that are inimical to peacefully living among ordinary never-imprisoned citizens.

There’s a different group of citizens many of us know about which may help us grasp the concept of how adapting to stress can lead to the development of not just a skillset, but a mindset that can make living in so-called “normal” society difficult, if not sometimes impossible. Ironically, the impact of the adaptation tends to create some overlap between the two groups.

I’m talking about veterans of modern wars, like those we fight in Afghanistan, and Iraq. Many of them come home with Post-Traumatic Stress Disorder (PTSD), and Traumatic Brain Injury (TBI). The latter, in particular, results from the development of a way of thinking, and reacting to an environment, which is dangerous.

And, yes, that’s kind of a vague sentence, isn’t it? Because it has a dual meaning. The way of thinking, and reacting to the environment, is dangerous once the vet returns home. But it is a way of thinking, and reacting to a dangerous environment, which becomes dangerous once the vet returns home only because it no longer fits. It works in certain kinds of dysfunctional environments – those where society has broken down, and an actual war is in progress – but it becomes dysfunctional itself when our men, and women, come home to a more-intact society.

Prisons do the same thing, without necessarily achieving any benefit. [5]I could be cynical – or realistic – and note that actually both war, and prisons, bring the same benefit: enriching those who leach off the lives of the vets, and the prisoners.

But just as wars are not actually fought in order to effectuate peace, what our current system of “laws” and prisons do not do is effectuate anything close to “justice.”

What makes the quest for “justice” – this essentially meaningless term – so unbearable is that what it does effectuate is more harm. It is, if you will, the opposite of tikkun olam, or “repairing the world.”

And I guess if you want my definition of “justice,” it would be “that which works to repair the world, after it has suffered an injury” (like, maybe, that inflicted by someone committing a crime).

And that, Judge Kopf, is something I think lawyers and judges should be working to do.