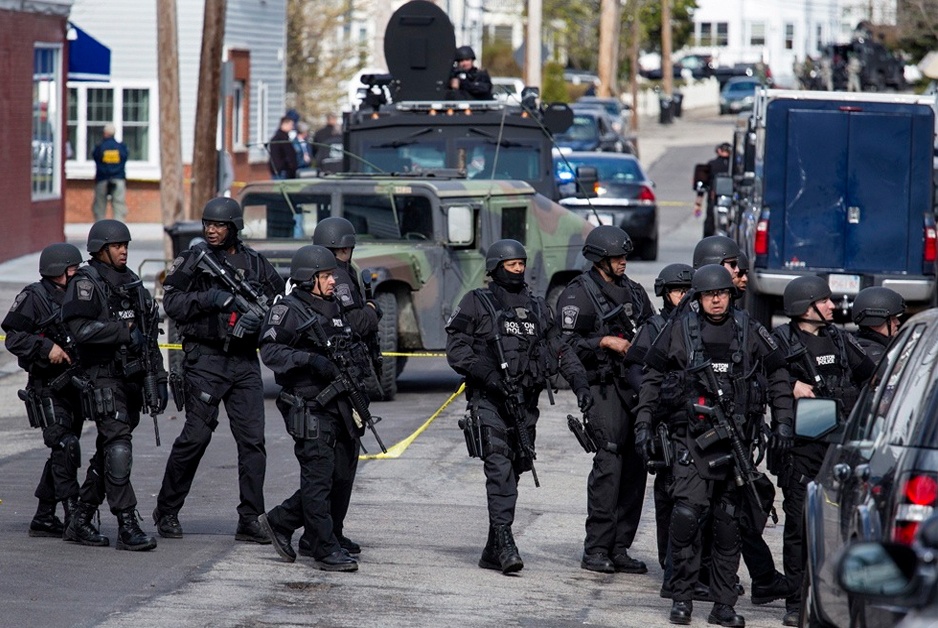 The Very Definition of a Police State

Yesterday afternoon, I stood in the backyard at the home of friends, waiting.  The day before, my friends were married in that backyard; yesterday the reception was held there.  People were arriving; the reception was just getting underway.

The beginning noises of the reception were drowned out by the buzz of a small airborne black-and-white vehicle.  I watched as the helicopter appeared to be repeatedly circling the yard in which I was standing. I could just read a few of the words on the tail.  One stood out in capitals: “POLICE.”

Before going on, let’s get a few definitions out of the way.  I hate to pepper you with these, but I don’t want you to think I’m misusing words. So let’s take our definitions straight from a respected American English dictionary.

a political unit (as a nation) characterized by repressive governmental control of political, economic, and social life usually by an arbitrary exercise of power by the police and especially secret police in place of the regular operation of the administrative and judicial organs of the government according to established legal processes: a totalitarian state.

1: depending on choice or discretion; specifically : determinable by decision of a judge or tribunal rather than defined by statute

2  a: (1) : arising from unrestrained exercise of the will, caprice, or personal preference : given to expressing opinions that arise thus (2) : selected at random or as a typical example

b : based on random or convenient selection or choice rather than on reason or nature

The term police state describes a state in which the government exercises rigid and repressive controls over the social, economic and political life of the population. A police state typically exhibits elements of totalitarianism and social control, and there is usually little or no distinction between the law and the exercise of political power by the executive.

Let’s look at one more from Merriam-Webster.  A partial definition of “totalitarian” is:

If you’re feeling energetic, you might look up “repressive,” “repression,” “repress” and “secret police,” also.

A “Police State” Does Not Require 24-Hour Lockdown

The helicopter circled for perhaps five, maybe ten minutes.  Eventually, it appeared to lose interest and buzzed off.  The reception began.  Toasts were made.  The helicopter was forgotten.

A lot of people think that a “police state” is something like Nazi Germany.  They hear or read words like “rigid” and “repressive” and they just assume it had to be something like that and not something like modern America.

In fact, most people who think that don’t actually know much about what it was like to live in Nazi Germany.

[W]ith the history of Nazi Germany, it has been tempting to paint pictures in stark black and white, clearly delineating good and evil — for was not the Third Reich the most thoroughly evil political system ever created?  (Richard Bessel, Life in the Third Reich, p. xvii (1987).)

Tempting as it is, to paint in black-and-white is nearly always a mistake.  That is particularly true when it comes to police states.  For one thing, as I have written elsewhere, police states do not spring upon the world fully formed.  They evolve from other forms of government.  Pre-Nazi Germany, as I have also noted elsewhere, was not altogether dissimilar from the United States of America.  It was a constitutionally-based democracy with clearly-delineated, constitutionally-protected rights such as freedom of the press and requirements of habeas corpus.  Hitler eventually did away with these rights — legally — “for national security purposes” and special courts were created outside the normal system for the treatment of the nation’s enemies, some of whom were citizens of the United States.  Only government-approved attorneys were allowed and the hearings were secret, again, for reasons of “national security.”  Sound familiar yet?

Unfortunately, our view of how Weimar politics worked is still very much outlined by the savage pens of [numerous writers], who depicted Germany as Teutschland, a swastika-emblazoned preserve of stiff monarchists, bloodthirsty generals, monocled industrialists, and saber-scarred academicians who somehow combined to produce the horror of the Third Reich….

Yet these observations completely obscure the essence of National Socialism, which amounted to a grassroots repudiation of Teutschland in the name of a renovated nation, the Third Reich.  (Peter Fritzsche, Germans into Nazis, p. 211 (1999).)

The Nazi tent was big enough for big business and workers, liberals and conservatives, those who wanted to be proud of their country and those who were just tired of what had come before.

A grassroots repudiation of the existing political parties.  Hmmm…  The United States is nothing like pre-Nazi Germany.

After the usual announcements, the toasts, the throwing of the bouquet and tossing of the garter, a few of the people began dancing.  I made my way to Hank, the groom, who was talking with a couple of other people.  As I approached, one of the newly-arrived guests was saying, “So I got out and they told me to just back up slowly with my hands above my head….”  Whether talking shop, testifying or testilying, law enforcement officers refer to this as an “extraction.”

The guest, “Josh,” was relating the story of how he almost missed the wedding reception when he was stopped by police down at the end of the street, less than a block away, who surrounded his car and ordered him out at gunpoint.

One cop pulled me over.  Suddenly, another car zoomed right in front of me and stopped.  Then another pulled up.  When I saw I was surrounded and I noticed in my rear-view mirror that an officer was drawing his weapon, I was like, “Holy Shit! This is serious!”

And he told himself he needed to stay calm and do whatever he was told. He wasn’t joshing.

What was so serious that Josh had to be stopped, surrounded and “extracted” from his car at gunpoint?  Apparently, Josh drives a gray Audi.  Apparently, someone, somewhere in Fresno, driving a gray car — Josh would later point out that, unlike his car, witnesses described the sought-after car as being without license plates — had been involved in a shooting.

He went on to explain that the police somehow managed to avoid shooting him long enough to find out that he was not, in fact, the “driver of a gray car” for whom they were looking.

Stopping and Detaining People in the Modern U.S. of A.

The United States used to have a concept known as “probable cause.”  The aforementioned dictionary defines that as “a reasonable ground for supposing that a criminal charge is well-founded.”  For a long time, this was the only ground for stopping drivers suspected of breaking the law.  More recently, stops have been permited under a less-restrictive standard of “reasonable suspicion.”

Without doing an exhaustive history of the terms, it is my recollection that during the evolution of “reasonable suspicion,” it was originally identified as being quite similar to “probable cause.”

The California Supreme Court has “distilled” the meaning of “reasonable suspicion” from decisions of the United States Supreme Court:

A detention is reasonable under the Fourth Amendment when the detaining officer can point to specific articulable facts that, considered in light of the totality of the circumstances, provide some objective manifestation that the person detained may be involved in criminal activity.  (People v. Souza 9 Cal.4th 224, 231; 885 P.2d 982 (1994).)

So what made it reasonable to stop Josh’s car one block from the wedding reception?  If you ask the officers, they had specific articulable facts.  The car was gray.  In light of the totality of circumstances — that is, they were looking for someone in a gray car who was involved in a shooting in Fresno and Josh’s car was gray — they had some objective manifestation that Josh may be involved in criminal activity.

Thus we arrive at the modern meaning of “reasonable suspicion,” which is pretty much “whether or not a law enforcement officer wanted to do it.”  (See the definitions above, particularly “arbitrary.”)  Simple.

And it simply provides us with an example of the very definition of a police state.

The Rise and Fall of the Fourth Amendment

You see, before the United States government existed, “law enforcement” officers in America — British soldiers and tax collectors — would go into homes and businesses and search people with “general warrants.”  The Excise Act of 1754 created a situation where authorities had unlimited power to interrogate people about how they used things that had been imported to America.  There was a “colonial epidemic of general searches.” It was the resistance of Americans to this sort of thing which resulted in the Revolutionary War and the Declaration of Independence which ultimately allowed for the creation of the United States of America.

What happened to Josh — what happens to nearly anyone who comes into contact with the police today — is exactly what caused George Washington, Thomas Jefferson, Thomas Paine and thousands of American colonists to fight a war against the British.  The authorities surrounding and stopping gray cars with license plates and extracting drivers at gunpoint because someone in Fresno driving a gray car without license plates was involved in a shooting is arbitrary.  Arbitrary stops by the police are wrong and unconstitutional.

Yet arbitrary seizures like this occur in Fresno practically every day.  Normally when you hear about them, you don’t think twice because in the stories you normally hear, the police got the bad guys.  Or maybe you just accept it as part of the price of going into a courthouse or other government building.  Once or twice in the decades before this became normal, someone came in with a weapon.  There’s a saying that even a blind squirrel gets a nut once in awhile.  But if the authorities can search whoever they want, whenever they want, without a warrant, they’ll find more nuts.

We Have Met the Enemy And He Is Us

Free men can never rely upon courts alone for the preservation of their freedom. Courts can give warning of danger. But they are really powerless to protect us from ourselves. They can remind us of our heritage. But they cannot preserve that heritage for us.

Today our courts no longer even give warning.  They’re not only powerless to protect us from ourselves, they’ve joined us on the march to totalitarianism.

Let’s hope you do as good a job of keeping your head as he did.