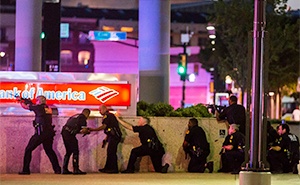 If I don’t start with this, too many people are not going to be able to get past their own prejudices to understand what I’m going to try to say here: I am not going to advocate for shooting police officers. In fact, I posted this on my Facebook feed yesterday, and I’m pretty sure I posted it before I even knew about the 11 officers shot in Dallas:

I wonder if there is a way to take Gandhi, and Martin Luther King’s ideas, and stop cops from executing black men in our streets.

Is there a way that white people, seeing cops attacking a black person, can step between them, en masse perhaps, but if you are the only one there, can you do it anyway, and stop them?

Perhaps, if even that won’t stop murderous cops, other whites will finally do something, as whites who step between cops and their black victims, start taking the blows, and bullets, instead.
Maybe we can force an end to this, by forcing the Blue Hooded Klan, to choose between beating, and killing whites, or letting a black man live.

Maybe then the videos will matter.

Because, for too many, it appears that ?#?BlackLivesDontMatter?.

So don’t misunderstand what I’m trying to say here. When I say things like, “the executions must stop,” or even indicate that police officers will learn to stop killing indiscriminately, or they will pay, I am not advocating that anyone should go out and shoot them. A war with cops is going to result in more dead civilians than cops.

Sadly, though, it appears that war may be inevitable. I absolutely don’t mean to imply that I think people should be shooting cops, although I suspect we’re going to start seeing more of it, and I do think it is the fault of not just the police, but the entire collapsing legal system in the United States.

I’ve written more than a bit recently about the fact that the United States has become essentially lawless. I’ve argued that we are no longer a nation of laws, but of men. At times, I’ve made it more clear that I’m referring to the fact that the U.S. is now an oligarchic nation, with the oligarchs completely unrestrained by law. When the law goes against what the oligarchs want, they simply reinterpret it in a way that does away with that “problem.”

Some seemingly-long time ago—but it really wasn’t all that long, when I realize that my father is now three-quarters-of-a-century old; I am more than a half-century old; and the “long time ago” of which I now speak was less than two-and-a-half centuries ago—a document was produced by a group of people who fomented a Revolution, and would later establish an entirely new nation.

They began with these words:

When in the Course of human events it becomes necessary for one people to dissolve the political bands which have connected them with another and to assume among the powers of the earth, the separate and equal station to which the Laws of Nature and of Nature’s God entitle them, a decent respect to the opinions of mankind requires that they should declare the causes which impel them to the separation.

The document went on to boldly state:

We hold these truths to be self-evident, that all men are created equal, that they are endowed by their Creator with certain unalienable Rights, that among these are Life, Liberty and the pursuit of Happiness. — That to secure these rights, Governments are instituted among Men, deriving their just powers from the consent of the governed, — That whenever any Form of Government becomes destructive of these ends, it is the Right of the People to alter or to abolish it, and to institute new Government, laying its foundation on such principles and organizing its powers in such form, as to them shall seem most likely to effect their Safety and Happiness.

It is the Right of the People to alter or to abolish it.

But who are the people? Are they four shooters in Dallas? Are they #BlackLivesMatter? Is it #BlueLivesMatter, which, in its own way has already arguably carried out a successful coup against the United States, the proof of which is the fact that the Rule of Law is no longer the law of this land?

I don’t know the answer to that question, exactly. But consider this: the 13 original colonies that would later become the United States of America did not go one day from being peaceful British properties to, the next day, being the United States of America. Due to time limitations, I’m not going to do my usual linking to all the other things that might back up what I’m saying, such as the various examples summarized in this statement of the aforementioned document:

For protecting them, by a mock Trial from punishment for any Murders which they should commit on the Inhabitants of these States[.]

I imagine, from what I’ve read, that the United States of America was birthed slowly, and painfully, over a period of time, and after a period of trauma punctuated by intermittent skirmishes between the authorities, and the People.

Whoever “the People” were.

But, at some point, there were enough of the “right” people to argue against the then-existing government, and declaring that “they”—again, these People—would no longer be bound by the rules laid out by that government.

He has abdicated Government here, by declaring us out of his Protection and waging War against us.

This is the inevitable reality that comes from a ubiquitous, insouciant, and arbitrary oppression. The steady drumbeat of dead bodies, the constant dropping of YouTube videos that allow those of us who are not blind to see the unnecessary killings of some People, cannot help but eventually work its way into revolt. It happens everywhere there are People. It happened in the 13 original colonies, and eventually boiled over into a war, a Revolution. If you think about it, that was actually our first Civil War, because the People at that time were British subjects, who fought British soldiers, and those on our side of the Atlantic had the home court advantage, and it paid off in the birth of a new nation, conceived in a kind of Liberty, and dedicated to the proposition that some men were created equal.

Not black men, mind you, but some men.

Yet there is a Book that many in this lawless nation claim to invest belief in—a book they actually argue is a “higher law,” and so it is sometimes used to justify the abolition of some of the laws on which this nation was founded, just as it was used to found the nation where only some men were created equal.

Among other things, that book says:

Don’t be misled—you cannot mock the justice of God. You will always harvest what you plant. (Galatians 6:7, New Living Translation.)

Elsewhere, an older portion of that Book, held sacred not just by those whose claims should make Galatians important to them, but also other People, says that the arbiter of their higher law is one who responds to misdeeds by

visiting the iniquity of the fathers on the children, on the third and the fourth generations. (Exodus 20:5, New American Standard Bible.)

(Of course, like all things actually written by human beings, the Book contradicts itself. See Deuteronomy 24:16, and Ezekiel 18:20.)

It would be nice if the killing would stop. But, more importantly, it is important that the killing should stop. Yet, I think it is inevitable that it is only going to get worse. I hope I’m wrong, but I suspect change will come no other way. Americans have always been hard-headed, as shown by the fact that while writing the very document I quoted above, they were yet of the opinion that only some men were created equal. Men like them. Not men whose skin was of a different shade, whether red, brown, black, or anything else that wasn’t deemed “white.”

We have become a society of unduly sensitive people. Not just those who find micro-aggressions in every benign statement, but who walk the streets with a shield and a sense that they are not receiving the respect they desire, they deserve. The narrative is that we need to have discussions about our differences, but it’s a lie. Everyone wants to lecture, to chastise, those who disagree. Discussion suggests listening, understanding.

There is no interest in this. The only interest is in telling those who don’t feel as you do that they are wrong, and that they will change their feelings to match yours. Even very intelligent people have forsaken reason for emotion, dirtying up our national mindset by confirming the feelings of the most passionate. We escalate anger, and then justify it by confirmed bias.

Today is a day for grownups to talk the children off the ledge. These four shooters in Dallas do not reflect the Black Lives Matters movement, and any screaming that it proves anything is absurd. At the same time, there is no justification for the murder of these Dallas cops. The deaths of black men at the hands of police does not mean killing random cops is a legitimate response. Ever.

A concept that has been raised is that we now live in a fact-free democracy, where feelings have replaced facts and reason to guide our actions. This is what comes of your “passion,” death. The toxic mix of passion, anger, self-righteousness and ignorance will solve nothing. As the New York Times asked, when will the killings stop? They will stop when we stop indulging our base instinct to do as we feel instead of as we think. If we can’t get past our indulgence of mindless, simplistic emotional indulgence, the number of dead bodies will continue to grow.

The People have always been driven by a mixture of both emotion, and more (shall we say) cool-headed logic. They have built systems which have favored enough of the People to keep the peace, peppered by the occasional revolution.

I don’t know how we get back to that kind of world. For too long we have failed to teach our children well, and now, I suspect for all of us our hell will slowly go by.

What I do know is that the Tin Soldiers—our militarized police force—can do more to make things better, or worse, than the People can. Because the People have no control over any individual Persons who may decide that now is the time in the course of human events when it has become necessary to go to war. But the Tin Soldiers have Tin Leaders, and a hierarchy, that could take steps to dial things down, rather than double down; to dial things back, rather than spin the narrative that they are only (pre-emptively) shooting back.

I write this post with a great deal of sadness, though, because I know that’s not going to happen.

And, therefore, what is inevitable will.