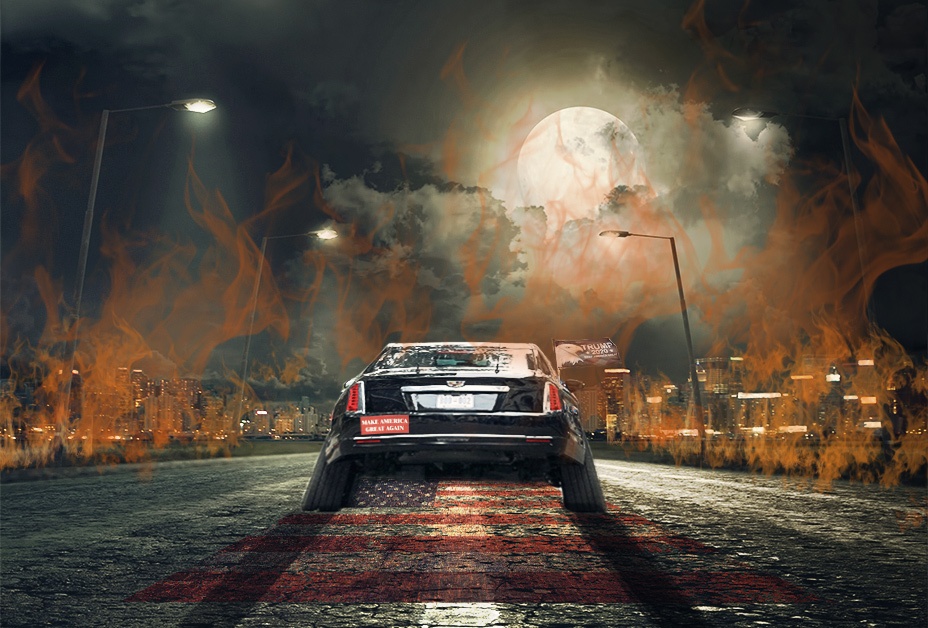 To Hell in a Handbasket

“Death to the Constitution!” “Long Live the Constitution!” Seems like these days, we can’t make up our minds. The same person on different occasions, depending on the circumstances in which they find themselves, will make both those statements. They want free speech. Then they don’t. They want police to back off on protesters. Then they don’t. They think we should let everyone live free. But then they don’t. The only things that seem clear are that unprincipled tribalism is all that matters anymore, and America is on the way to hell in a handbasket.

So much happens so quickly lately that I feel overwhelmed whenever I want to write a blog post. I will tie everything together before I finish. But as Flannery O’Connor (among others, such as E.M. Forster, and Pulkit Arora) once famously said:

I write because I don’t know what I think until I read what I say.

And right now, disparate ideas swirl in my mind, and I don’t know what I want to say.

Of course, the big news is the protests, or demonstrations, or riots—the choice of words depending at least partly on your place on the Privilege Ladder, and partly on the changing landscape over the last three days—over the death of George Floyd.

As another non-resisting black man is summarily executed—slowly and deliberately murdered—by a white officer for an allegation of a minor crime, the fight over race and racism once again flares into flames.

This comes fast on the heels of the murder—again in broad daylight—of Ahmaud Arbery.

This morning, the very same police department whose officer was responsible for George Floyd’s murder arrested a black CNN reporter while he was on-the-air covering the protests. A short distance away, a white CNN reporter had a different experience.

How can one city have a 7 percent black population, but blacks comprise 60 percent of gun deaths?

And before you point out that the people in that last linked story aren’t being killed by cops, I know. They’re being killed by structural racism. I never said it was only cops killing black men.

To hell. In a handbasket.

Dare I write that #AllRacistsMatter? I thought of that as a possible headline while I was reading articles about outrage culture, and Amy Cooper, and our collective tendency to react to things like the Amy Cooper episode as if we were actually sitting in a virtualized, Internet-enabled, Coliseum, screaming to the victor, standing over the not-yet-dead body of the vanquished, “Kill him! Kill him!” (Or, in this case, I guess, “her”—assuming from the video that would be the pronoun of choice.)

Another article on the Amy Cooper issue noted:

In the Central Park case, the situation is somewhat complicated by Christian Cooper’s own description, in a Facebook post, of what happened just before he began recording the video: After Amy Cooper refused to leash the dog, Christian Cooper told her he was about to do something she was “not going to like” (which she could have legitimately perceived as threatening), then tried to draw the dog toward himself with a treat. This does not justify Amy Cooper’s overreaction, but it may partly explain her being so distraught.

Another quote from that last article provokes deeper thought:

“ [T]he social media panopticon often doesn’t allow for meaningful contact — instead, it promotes Manichean thinking, dividing the world into good and bad people, with the bad people having to be destroyed (you can read about many such instances in Jon Ronson’s book So You’ve Been Publicly Shamed).”

I have mixed feelings on this. I shrink from writing because of, among other things, my own whiteness. Are my feelings mixed because I’m white? Or am I really rebelling against Manichean thinking, refusing to divide the world into good and bad people?

But I need to work through it, despite the accident of birth and genetics that made me white. I didn’t ask to be white. And many born after me, and still being born today, did not, and will not, either.

Because Amy’s not alone—or, to put it another way, it’s not just “Karens” all the way down—and somehow all must convert if we’re to see a society where everyone—regardless of race, ethnicity (or whatever other bigotry you want to name)—can be free and safe.

All of us matter, however hidden, however unidentified, however silenced by our own beliefs that we might be seen as racists, or that we are not racists, if we’re to build a new world.

Otherwise, folks, it’s to hell. In a handbasket.

The Ambiguity of Language & Place

After all, one of my favorite philosophers, Donald Davidson, wrote several books and papers that cover this. I don’t completely understand them. I wish I did. What I took away from them—which is no doubt just one reason why one of my philosophy professors (Dr. Singer) told me I should not go into philosophy—is that we can never really understand how another person uses a term without already knowing what that person believes. And we cannot know what that person believes without knowing how they use the terms they use to describe to us their beliefs.

So, no, other than to point out that the language we use when talking about race is ambiguous, and also connected with our geo-politico-socio-psycho-biological place in the universe, I don’t think I can write much about that. I do hope, though, that I can make you puzzle over this section, and weave it into a coherent piece before reaching the end of this post.

And, if we don’t figure this out?

It’s to hell in a handbasket.

Who You Calling “We,” White Man?

The quintessential exposé of white privilege comes only with an understanding of structural racism. Some people call this “institutional” racism, and I have called it that myself. But as Reni Eddo-Lodge says in “Why I’m no longer talking to white people about race,” the more pernicious structural racism

doesn’t reveal itself in spitting at strangers in the street. Instead, it lies in an apologetic smile while telling a non-white employee that they didn’t get the promotion. It manifests itself in a CV tossed in the bin because the applicant has a foreign-sounding name. Racism is woven into the fabric of our world. This demands a collective redefinition of what it means to be racist and what we must do to end it.

Structural racism is all around us. Our words demonstrate its perniciousness. I’m not telling you anything new when I point out the use of words like “whitewash” and “blacken” and that bad things, negative things “darken” the landscape in which we live. We don’t think about this.

Similarly, “we” maintain in to our institutions a ghostly backdrop of racism which goes largely unseen, unless you actually look. Although California’s Division of Juvenile Justice has apparently taken it down, at the time I was defending large numbers of juveniles, the most recent numbers showed that only 9.7% of children imprisoned in California’s Division of Juvenile Facilities (i.e., prisons for kids) were white (see my footnote to this article; as I said, the DJJ apparently took down the source).

Meanwhile, though California has the largest population of blacks in the western United States, and the fifth largest of all the states, the relative percentages of whites versus blacks in the total population of the state is the reverse of that over the several years I looked it up for the Division of Juvenile Justice.

Are white kids really that good?

I think you know the answer to that. But “we”—the collective “we,” through the structures we put in place—decide who is “good” and who is “bad.”

And “we”—white people—built those strictures and structures into the foundation of our nation, which is almost certainly why racism in the United States is so very different, and so much worse, than that of other nations. (Interestingly, not only was the U.S. built on the backs of black people, a black man became the first casualty of the American Revolution!)

As fish are to water, so are whites to structural racism and white privilege. Or perhaps a better metaphor is air, because human beings don’t pay much attention to it, and the benefits it brings, until something goes wrong with it, and it doesn’t bring benefits.

Structural racism and its essential component of white privilege don’t harm white people. Quite the contrary, as the names imply, they help us. We succeed more because we have more. We have more because—depending on how you want to look at it—we start with more, and we start with less.

On the flip side, structural racism and the lack of privilege that blackness brings—like a person stuck breathing bad air—causes black people to notice what whites do not see.

White people must learn to recognize the quality of the air around them, and around black people, and work to ensure our systems are properly ventilated.

Otherwise, yes, it’s to hell in a handbasket.

We—and this time I do mean all of us, regardless of race, ethnicity, or whatever other differentiating factor—must communicate, and work together. In addition to changing how we ourselves think and understand things, we must sincerely and strenuously work on reforming the structures that maintain racism, white privilege, and black oppression.

We can burn them down, which while sometimes deeply satisfying to do, and to watch, does not seem to work well towards changing things. Or we can try something different.

Burning it all down, as I’ve said, can be deeply satisfying. And may end up being necessary if we don’t take the alternative course of reforming the structures. Because, unfortunately, too many white people do not learn, even when burning it all down destroys their way of life. They simply “reconstruct” it.

This is the problem a new civil war will bring. It may be the only way we know how to “fix” things. But we fix nothing by it.

Nor did the war knit the nation back together. Instead, the South became a stagnant backwater, a resentful region that lagged and resisted the nation’s progress. It would take a century and the Civil Rights struggle for blacks to achieve legal equality, and for the South to emerge from poverty and isolation. “Emancipation and reunion, the two great results of this war, were badly compromised,” says Goldberg.

I disagree with Goldberg’s assessment that the Civil War was not worth it. I think it was a necessary move, because of the very entrenchment of white supremacy he points out. And because white supremacy remains so entrenched—indeed, right now it appears to be in the ascendancy, thanks at least partly to a President who profits from it, and thus stokes it in the electorate—that civil war may again become necessary.

Maybe civil wars are just going to be part of America’s growing pains, or death throes, until either racism, or America, cease to exist.

But there is another way, if only we have the will to take it. We can finally decide that instead of tearing down our own homes, we will—in addition to ferreting out the racism we harbor in ourselves—tear down the structures that perpetuate racism. As Mike Render, better known as “Killer Mike,” said,

“We don’t need a dumbass president repeating what segregationists said: ‘If you start looting, we start shooting.’”

We don’t need legislators, prosecutors, police chiefs, or anyone else who will wait for the fires to die down, and then return to business as usual. Killing black men as usual. Reinforcing white privilege, and black oppression, as usual.

We get rid of those types of “leaders,” and we take on structural racism.

Either that, or it’s to hell in a handbasket.

Home » Criminal Defense Blog » Race » To Hell in a Handbasket