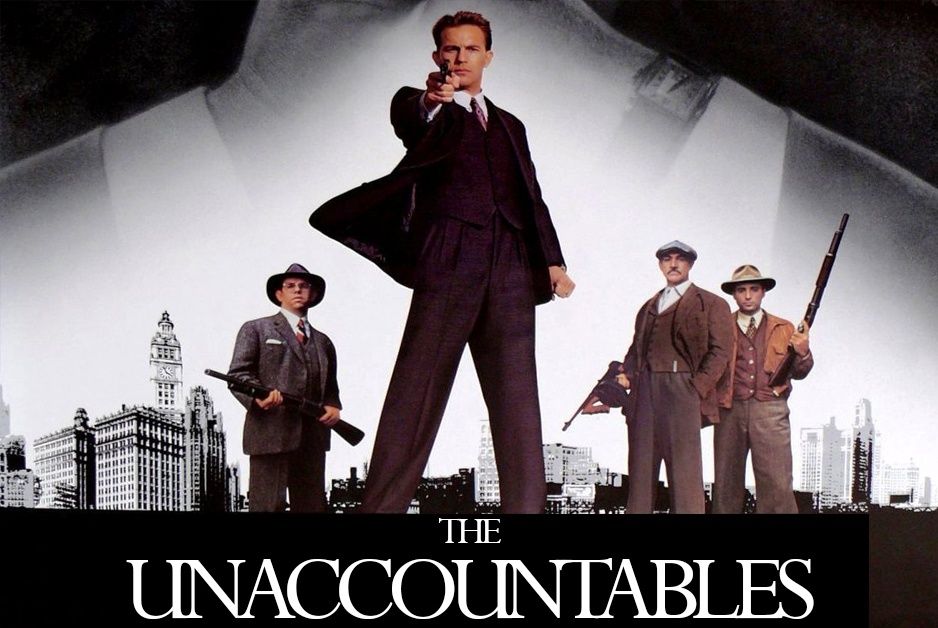 Last year, on a 2,000-mile roadtrip, I listened to a semi-fictionalized, semi-autobiographical book about the life of Eliot Ness, called “The Untouchables.” Ness was a law enforcement officer tasked with taking down Al Capone, a notorious mobster, who had become famous, and rich, for running bootlegged alcohol during the Prohibition.

The officers selected by Ness for his team were called “The Untouchables” because they were fearless, and believed to be incorruptible. Prior to Ness putting together the team, Capone himself had remained largely untouchable due to his ability to bribe law enforcement. [1]Then, as now, huge numbers of police officers were either corrupt, or corruptible. That’s what made Ness’s men so unique. And, if I recall, even one of his team was compromised.

Today’s cops, of course, are not even remotely the fearless and incorruptible sort that made up Ness’s team. The willingly-blind cannot understand this, of course, but today’s cops have been largely corrupted and taught fear by their trainers before they even make it to the force.

The corruption comes in the form of learning how to write police reports so as to cover their asses when they do things that would get you or me arrested, were we to do them. Things like assaulting people in public for watching—and videotaping—them, despite the fact that court after court after court has ruled such videotaping completely legal, and some states where cops attack, or arrest, people for recording even have written laws that say recording cops is legal.

I might not have any real proof that cops fabrica—oh, wait….

The fear comes from the hypersensitization to danger that is drilled into police officers. Scott Greenfield [2]You knew that was coming. has referred to it as “The First Rule of Policing.” And he has written about it extensively. Perhaps his clearest explication of the rule came in his 2010 article, “Counting Bullets.”

The first rule of policing, as I’ve explained many times, is get home for dinner. What? Did you think it would something heroic and inspirational? Well, it is, just not to you. Foremost in a police officer’s mind as he straps on his gun is to make it through his shift unharmed. Be reasonable. It’s a job, not something to die for. He’s got a wife and kids. She’s got a husband and kids. Not even a pension and gold shield will make up for leaving your children parentless. Get home for dinner is a very good rule.

In that same article, the subject of which wasn’t actually the First Rule of Policing so much as a musing over reports that shootings by and of police officers in New York were down the year before. Scott posited (among other things) that cops were becoming less fearful of the public. And he suggested that this might not be a good thing, as, lacking the fear that their disrespectful—I would even say “reprehensible”—behavior towards us would upset us, they might become emboldened to do what they will with us.

Are cops less fearful of us? A good argument could be made for saying they are. After all, they have no problem with approaching people who are doing nothing illegal, and slapping their cameras out of their hands, then blithely working together to fabricate police reports to make it sound as if the individual they attacked did something illegal, and deserved it.

And this isn’t so rare as the bootlicking public might think. One New York detective even testified after being snared in a corruption scandal that it was “common practice.” My experience as a criminal defense lawyer has caused me to believe that all police officers will lie, if they think it is necessary to achieve a goal—whether that might be punishing someone who crossed them; nailing someone they think is a bad guy, but on whom they don’t have enough evidence; or just covering their asses.

But don’t take my word for it. Here’s what Peter Keane, a former San Francisco Police Commissioner, said:

Police officer perjury in court to justify illegal dope searches is commonplace. One of the dirty little not-so-secret secrets of the criminal justice system is undercover narcotics officers intentionally lying under oath. It is a perversion of the American justice system that strikes directly at the rule of law. Yet it is the routine way of doing business in courtrooms everywhere in America.

The quote comes from a 2013 New York Times article, “Why Police Lie Under Oath.” But officers don’t just lie under oath. Sometimes they do it as performance art for citizen bystanders. Sometimes for the video. Sometimes they do it on Facebook. [3]Aside from ignoring Facebook’s terms of service this way, sometimes the cops work to make sure only their version of the truth can get out by ordering Facebook to shut down a targeted citizen’s Facebook account. Sometimes it’s both.

Without video, [4]You really have to love the way the lying officer wrote this one up: “’In fear of receiving a battery’ Kahn ‘defended himself by using his impact weapon to disable the offender’s delivery system,’ the report said.” police lies can result in lengthy prison terms for innocent people.

Lying is one thing. What about Scott’s other concern, that cops might become less fearful, and “do as they will with us”? This one is interesting.

On the one hand, it appears that Scott is right. Cops most definitely appear willing to “do as they will with us.” This 2014 article from The American Conservative makes that clear.

A Department of Justice study revealed that a whopping 84 percent of police officers report that they’ve seen colleagues use excessive force on civilians, and 61 percent admit they don’t always report “even serious criminal violations that involve abuse of authority by fellow officers.”

This self-reporting moves us well beyond anecdote into the realm of data: Police brutality is a pervasive problem….

But is this because the police do not fear the public enough? Or is it because they fear the public too much? Are police officers shooting citizens to death as an extreme example of “do[ing] as they will with us”? Or because they’re scared shitless crybabies with hair triggers that go off due to uncontrollable anxiety and pants-pissing?

I don’t know if we can really answer that.

Video may show what appears to be an unarmed man with his hands in the air being shot down in cold blood, but the officer will likely never be charged because she will claim she was in fear for her life. Besides, he had drugs in his car. Who cares if the officers did not know that when he was shot: the post-hoc smear helps to justify the cop’s fear.

I’m not even going to bother linking all the stories about police shooting people holding water hoses, cell phones, wallets, etc. You can google that on your own. I would submit that these incidents may be fueled by fear, but many of them are also evidence that police just don’t care enough about the people they encounter to try to figure out what’s going on before pulling the trigger.

Going back to The American Conservative article, the one which referred to the Department of Justice study that showed 84 percent of cops reported seeing colleagues using excessive force,

In central New Jersey…99 percent of police brutality complaints are never investigated. Nor can that be explained away as stereotypical New Jersey corruption. Only one out of every three accused cops are convicted nationwide, while the conviction rate for civilians is literally double that. In Chicago, the numbers are even more skewed: There were 10,000 abuse complaints filed against the Chicago PD between 2002 and 2004, and just 19 of them ”resulted in meaningful disciplinary action.” On a national level, upwards of 95 percent of police misconduct cases referred for federal prosecution are declined by prosecutors because, as reported in USA Today, juries “are conditioned to believe cops, and victims’ credibility is often challenged.”

So the majority of cases of police brutality—which we know is a pervasive problem despite the public’s belief, because cops say so themselves (and they don’t always lie)—are never even investigated.

And then there’s the United States Supreme Court, which essentially gave police a license to lie in a set of cases that on their faces appear to restrict when police may use deadly force. But, in fact, they do anything but.

[L]egal experts find that “there is built-in leeway for police, and the very breadth of this leeway is why criminal charges against police are so rare….” … According to Erwin Chemerinsky, dean of the UC Irvine Law School, recent Supreme Court decisions are not a path towards justice but rather a series of obstacles to holding police accountable for civil rights violations.

So there’s the first gauntlet accountability must run.

The second gauntlet is equally important: the average citizen.

The average citizen doesn’t—deliberately, or with what mattered back in the days of the Rule of Law: the requisite mens rea—go about committing crimes all day. They’re not particularly fond of people who do. Aside from cops, there are some people who do. And cops sometimes arrest them. [5]You didn’t think the only thing they did was frame and shoot innocent people, did you?

This scenario—of people who don’t deliberately commit crimes, people who do, and a group charged with occasionally knowing the difference between the two—drives the average citizen to like cops. After all, if your average Joe (or Josephine, and all the possible incantations in-between) accepted reality, that realization that they have somehow managed to survive in the midst of a cesspool of cops who abuse as often as they abate would quite literally drive them to Despair. With a capital-D.

When you take that base, combine it with Police PR good enough to capitalize on confirmation bias, a collection of legal decisions from judges who should—but refuse to—know better, you end up with a perfect recipe for our post-Scalia modern police force. You get, from the police-officers’-union point-of-view, something far better than Ness’s Untouchables: you get the Unaccountables.