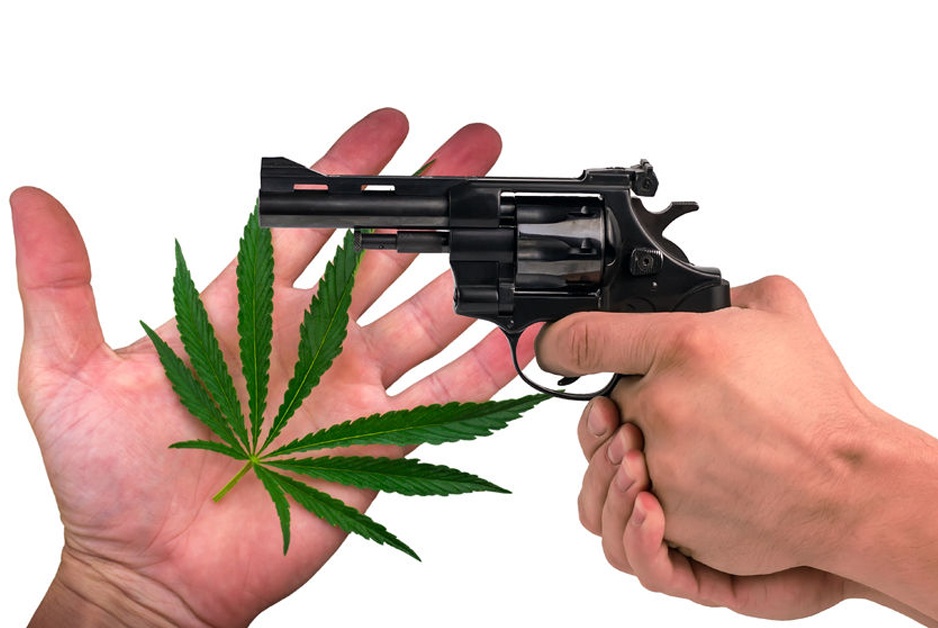 My first reaction when Gene Haagenson called me from ABC30 news to ask about a Nevada case preventing a woman with a medical marijuana card from owning—note that I’m stating it as the question was originally put to me, not as it really was considered in the court—a gun was that it was unconstitutional.

I told Gene I had not heard of the case yet, but would check as soon as I got the opportunity. I was driving at the time, so I couldn’t even look anything up on the computer.

After we hung up, I contacted a friend and fellow lawyer, Serita Rios, to ask if she’d heard about it. She hadn’t, but being near a computer, looked up a story about it and read it to me. We were both somewhat stunned at the idea that the Ninth Circuit Court of Appeals would say that a person exercising a statutorily-authorized privilege could be deemed, thereby, to have forfeited a core constitutional right.

Since then, I was able to locate, and read, the actual Ninth Circuit Court of Appeal opinion in the case.

Two things: you can’t really believe much of anything you see in the news anymore, and the opinion doesn’t say marijuana card holders cannot own a gun. That might be coming down the pike, but it’s not the holding of the opinion in Wilson v. Lynch.

Before I get into the opinion, though, I want to clean up a few things from Gene Haagenson’s story. If anyone listened to me, these mistakes would never be made in the first place. But I’m apparently not able to say the kind of sensational things—I tried, believe me—that will entertain the writer who is really only after the gist of what he thinks is a shocking story, anyway. And after today—after this blog post—I doubt I’ll ever have to worry about that writer calling me again, anyway.

Disclaimer: I suppose you could say I’m a little peeved that I expended the time and energy to try to accommodate the reporter, and then, not only could he get so much wrong in the story, but he quotes a doctor for the a legal opinion—a doctor who gets it wrong, by the way—when I had already given him a contrary opinion. And, oh, leaves me out of the story.

I can’t help but wonder if it was because my opinion was contrary to the doctor’s.

So, let’s do this cleanup, and then I’ll talk about Wilson. This is going to cause this blog post to meander a bit more than I typically like to do, but it can’t be avoided if I’m going to write an actual legally-sound post about the problems surrounding medical marijuana news stories, doctor-recommended-legal-advice, and then talk about Wilson.

First, and foremost: doctors are doctors, and lawyers are lawyers. I know you’d think that the logical “law of identity” would make that pretty clear, but my law practice which I practice as a lawyer who studies law things and offers law-oriented advice, rather than trying to fix broken bones, or prescribe drugs, or diagnose illness as a doctor would do, tells me differently. Sadly, there are a lot of convicted felons in California who would not be convicted felons if they had not followed the legal advice given to them by their non-lawyer doctors.

And let me throw in here that I know Dr. Brubaker, the doctor quoted in Haagenson’s story. Dr. Brubaker is a very nice man. Not being qualified to judge doctors, and not having experience with him as my doctor, I can’t comment on his abilities as a doctor. I will say I have heard very good things about his doctor-related activities, including from personal injury lawyers who use his services. I like Dr. Brubaker.

But Dr. Brubaker is a doctor. Not a lawyer. And, as much as I hate to sound like I’m criticizing a man I like, I would suggest that you not follow Dr. Brubaker’s legal advice. (Because much of it, from what I have seen, is wrong.)

And you might want to believe me, because I am not a doctor: I’m a lawyer.

If, in the context of the Ninth Circuit opinion, Dr. Brubaker says that excluding legal users of medical marijuana from buying a gun doesn’t make sense—and I assume that is the context, since the story was ostensibly about that opinion—then Dr. Brubaker is offering a legal opinion, and he is wrong. But we’re going to get to that opinion in a bit.

Let’s move on to the rest of the cleanup of Haagenson’s article.

The next item is that Dr. Brubaker issues a recommendation and an ID card. This might be what Dr. Brubaker calls the “ID card” he gives people, so it might not totally be Haagenson’s fault that this is reported. But I expect someone who is writing about marijuana laws in California to know a little bit more about it. What Dr. Brubaker issues—and I’ve seen them, so don’t write to tell me I’m wrong, even if you’re Dr. Brubaker—is essentially just another piece of paper (sometimes laminated), or plastic, that says that a certain doctor has made you a recommendation.

That “ID card” doesn’t even count as identification as far as any legal entities are concerned. It might “identify” you to Dr. Brubaker, and maybe some collectives, or dispensaries, might accept that it makes you a qualified patient (which is, again, a legal phrase), but it’s not an “ID card” as far as the law is concerned: it’s at most a recommendation. [1]And, actually, it’s just a potential piece of evidence that you have a recommendation.

The difference in California (remember the Ninth Circuit case deals with Nevada) is shown by California Health & Safety Code § 11362.7:

“Identification card” means a document issued by the State Department of Health Services that document [sic] identifies a person authorized to engage in the medical use of marijuana and the person’s designated primary caregiver, if any.

Unless Dr. Brubaker is the State Department of Health Services—and I’m pretty sure he’s not—then what he issues is not an ID card. It’s just a form made up to look like a card which shows that he has recommended marijuana for the holder’s medical needs.

The difference matters legally. Under the law, your recommendation only provides you with an affirmative defense that can be used in a court because it makes you what is sometimes known as a “qualified patient” according to California medical marijuana laws. It has no other real effect. But an identification card is supposed to prevent the police from even arresting you for cultivating, transporting, or even (in most cases) selling marijuana. The police, of course, ignore this, but the law says they can only arrest you if they have probable cause to believe you obtained the card fraudulently. [2]The fact that you might be growing more marijuana than you need for yourself does not mean that you obtained the card fraudulently. That’s going to implicate a whole ‘nuther situation, and set of laws.

The last little cleanup before moving on to Wilson comes from the last sentence of the article. There is no such thing as a “prescription” for marijuana. Some states might, as this NORML Medical FAQ says, authorize doctors to prescribe marijuana, but a doctor who prescribes marijuana will soon find himself unable to write prescriptions. That’s why we talk about physician recommendations. In California, in particular, you won’t find the phrase “marijuana prescription” anywhere on the Department of Health website, nor will you find that phrase anywhere in the California statutes relating to marijuana. [3]You will find numerous cases that refer to marijuana “prescriptions,” but that just shows that even the courts don’t understand the laws relating to medical marijuana. There is no such thing as a marijuana prescription in California, nor is one required: physicians in California recommend marijuana; they don’t prescribe it.

S. Rowan Wilson is a woman living in Nevada—not California, as Haagenson’s article claims—who had a “Nevada medical marijuana registry card.” [4]I’m not going to give point citations to the Wilson case. You can read the case yourself to find them. At some point after that, she tried to buy a gun. The ATF form she had to fill out to buy a gun had a question about being “an unlawful user of…marijuana.” The gun seller stopped her when she was filling out the form, because he knew she had a marijuana registry card, and because the ATF had also sent a letter to sellers telling them, among other things, that if they knew someone possessed a card authorizing possession and use of marijuana, then they had “reasonable cause to believe” that the person was an unlawful user of a controlled substance. Because marijuana may be legal under state law, but it is still illegal under the completely idiotic federal Controlled Substances Act.

Wilson sued, asserting five different claims. To stay within my normal already-too-long article length, I’m not going to detail all this. I’m more interested in the Second Amendment claim. In that regard, what matters the most—aside from the fact that she pretty much lost on all five claims—are two points.

First, and perhaps somewhat ironically, Wilson isn’t an unlawful user of marijuana. But it’s not because marijuana is legal for her according to Nevada, or that she has the card to prove it. Marijuana remains illegal under federal law. The quirk in this particular case is that Wilson claimed to have the card to make a political statement, but says—and the court accepted as true—that she does not use marijuana. So Wilson, herself, can actually buy guns, so long as she gives up her medical marijuana registry card long enough to do so. Then, presumably, she could go get her card again.

The second thing, though, is this: while the actual argument was over whether the government could forbid the sale of guns to someone who has a card authorizing them to use and possess marijuana, it seems clear that the court actually says that the government may legally forbid the sale of guns to anyone who uses marijuana. The fact that someone holds a card just makes it—well, I’ll let the court say it:

[I]t is eminently reasonable for federal regulators to assume that a registry cardholder is much more likely to be a marijuana user than an individual who does not hold a registry card.

So, again, in the first place, it looks like the law, according to the United States Court of Appeals for the Ninth Circuit, has erased another piece of the Bill of Rights—or at least impaired the pathway to (legally) exercising the right. If you are a marijuana user, licensed gun sellers cannot legally sell you a gun. And, in the second place, if you have a medical marijuana card, licensed gun sellers are to take that as a reason to believe that you are using marijuana, and so they cannot sell you a gun.

Now I wonder what that means for Californians if the AUMA passes in November?