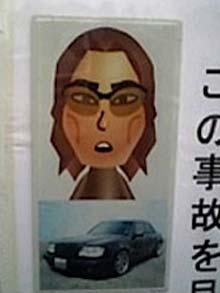 For a long time now, the Japanese have been on the cutting edge of technology. Now police there have parlayed this seemingly-nationally-inculcated skillset into a cheap way to catch criminals.

Frankly, I was a little surprised to hear that this story came out of Japan. It has all the earmarks of what passes for police work where I live in California.

Apparently, police in the Kanagawa prefecture of Japan really want to talk to somebody. Anybody. Apparently. Why else would they use Wii’s “Mii” feature to construct a “mug shot” of a person of interest. Or is he a suspect?

No, the only thing here that is suspect is whether the police officers in question have a) too much time on their hands and b) too few brains.

On the other hand, it just might work. How many Japanese can there be with hollowed-out cheeks whose skin tone nearly matches their hair? Add to that the fact that the head is large and the shoulders missing and I don’t think this guy should be as hard to identify as it first appeared.

Special thanks to @weirdnews on Twitter for posting the original link that lead me to this story.
Home » Criminal Defense Blog » Stupidity » Wanted: Your Avatar