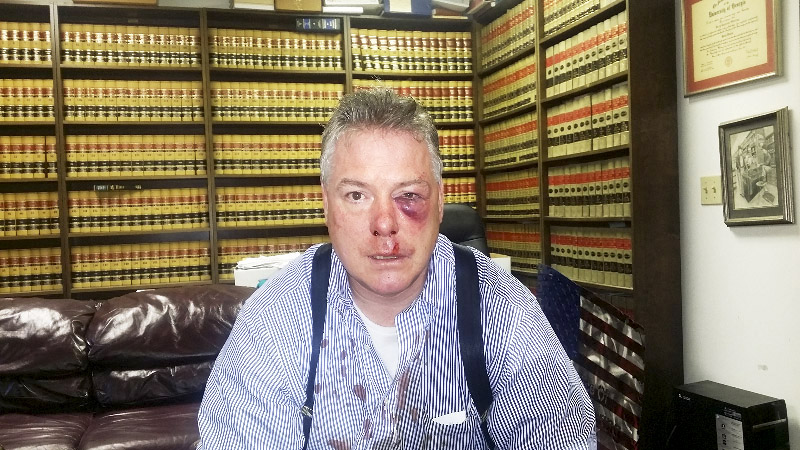 When I Want Your Opinion, I’ll Beat It Out of You

There’s a story that came to my attention first thing this morning, when I began my day, as I always do, by reading articles that show up in my various social media feeds.

I’ve spent the better part of the day trying to get more information – as Paul Harvey used to say, “the rest of the story” – because what I’ve read is almost unbelievable.

I said, “Almost.” I have my own history with authorities being pissed off at me.

[D]efense attorney James Crawford said he was attacked by a DA investigator he didn’t recognize.

And the image at the top of this post was part of the result.

At the time of this writing, I’m still trying to see if I can find out more than what the news is reporting. I know a few other things beyond that. But some of what I know relates to the environment that lead up to this, and I learned it from a source I cannot reveal.

That source, though, has some corroboration. Some well-known corrobation.

Radley said at the time,

Last October, I noted some really disturbing revelations coming out of Orange County, Calif., in which prosecutors were allowing accused felons to go free rather than reveal potentially exculpatory information about how they use jailhouse informants. Since then, it’s only gotten more sordid, getting covered in outlets from Slate to National Review to Al-Jazeera America. But it really ought to be on the evening news.

So far as I recall, it never made it to the evening news.

Among the other bits of information reported by Radley at the time, was this:

A newly unsealed transcript of a March 25, 2005, pretrial hearing in People v. Henry Rodriguez sheds additional light on the TRED deception. To convict Rodriguez, government agents violated legal principles established in Brady (records helpful to a defendant must be surrendered) and Massiah (police can’t use trickery to entice incriminating statements from charged suspects who have a lawyer). . . .

But what’s that got to do with Crawford? It turns out, plenty.

Crawford caused the 2005 hearing by filing a subpoena seeking the type of data contained in TRED, including Garrity’s jail movements and snitch-related operations.

Which brings us to the story today. The details are still a little hazy, but we know this much: the District Attorneys’ Office isn’t too fond of defense attorney Crawford right now. As the District Attorney’s Office publicly insisted after Crawford got a murder conviction overturned because of these corrupt practices:

[T]he scandal, which has won national attention and demands for a U.S. Department of Justice probe because of systematic cheating to win in dozens and dozens of criminal cases, is an imaginary concoction of devious defense lawyers and lamebrain reporters.

And apparently, yesterday, there was some kind of interaction – the details of which I’ve been trying to get at all day – in which the DA investigator decided to remind James Crawford, who was on his way to represent a witness in another case, that the DA’s office thinks defense attorneys are “sleazy.”

Crawford replied that they are no worse than those in the District Attorney’s office caught up in the jailhouse informant scandal, [an attorney representing Crawford] said.

To emphasize the point, a paper clip was thrown. On some reports, it may have been thrown back. Crawford allegedly began to walk away. The DA investigator, in the best tradition of DA investigators, seeing that Crawford’s back was turned, went after him.

And slammed his head into a bench.

Naturally, the Orange County authorities are planning a complete investigation. That’s code for,

We’re going to take some time to see what kind of cockamamie excuse we can cook up that bootlickers will accept well enough for us to tell the rest of you to fuck off, and possibly allow for Mr. Crawford to be arrested, and charged, for putting a DA investigator in fear of his life. Or something.

When I began looking into this – indeed, when I began writing this post – the name of the DA investigator was unknown to me. However, according to this Change.org petition, the investigator is said to be Dillon Alley.

DA Investigator Alley is no stranger to complaints of excessive force.

Around about the year 2000, Alley was a defendant in a lawsuit filed by the estate of a man who was shot in the back 28 times, while fleeing officers. There’s just something about seeing someone’s back that apparently sets off Dillon Alley.

Anyway, the officers argued that the use of force was appropriate: in refusing to dismiss on a motion for summary judgement, the court disagreed. Other than that, I can only tell you that I think the case eventually settled.

James Crawford, on the other hand, has never been sued for use of excessive force, never been accused of shooting anyone in the back. He’s a fighter, alright, but he fights his fights in court.

Unsurprisingly, neither man was arrested after this melee. Likely as not, this is because, according to at least one witness, James Crawford did not return the 10-or-more blows landed on him by Dillon Alley. So there’s no reason to arrest him. And Dillon Alley? He’s a fucking former cop turned investigator for a corrupt District Attorney’s Office, so who’s going to arrest him?

And so – at least for now – nobody has been arrested. Court officers pulled Dillon Alley off his victim, dusted him off, presumably gave him a breath mint, and sent him on his way until, as noted above, “a complete investigation” can be done.

But here’s what I wonder: will that “complete investigation” result in a release of videotape? I mean, I’ve heard courthouses have such things. What about eyewitnesses?

Or will the District Attorney bring forth a jailhouse snitch to say that while he was being secretly moved to another job location, he overheard the whole conversation, and Crawford is actually guilty of criminal threats, assault, attempted murder, and baby rape?

I don’t know the answers to those questions. But in a world where police are allowed to kill with impunity, and officers who shoot unarmed fleeing people in the back are rewarded by being hired by the Orange County District Attorney’s Office, I don’t have a lot of faith that anything other than a promotion for Dillon Alley coming out of this.

Home » Criminal Defense Blog » Prosecutorial Misconduct » When I Want Your Opinion, I’ll Beat It Out of You