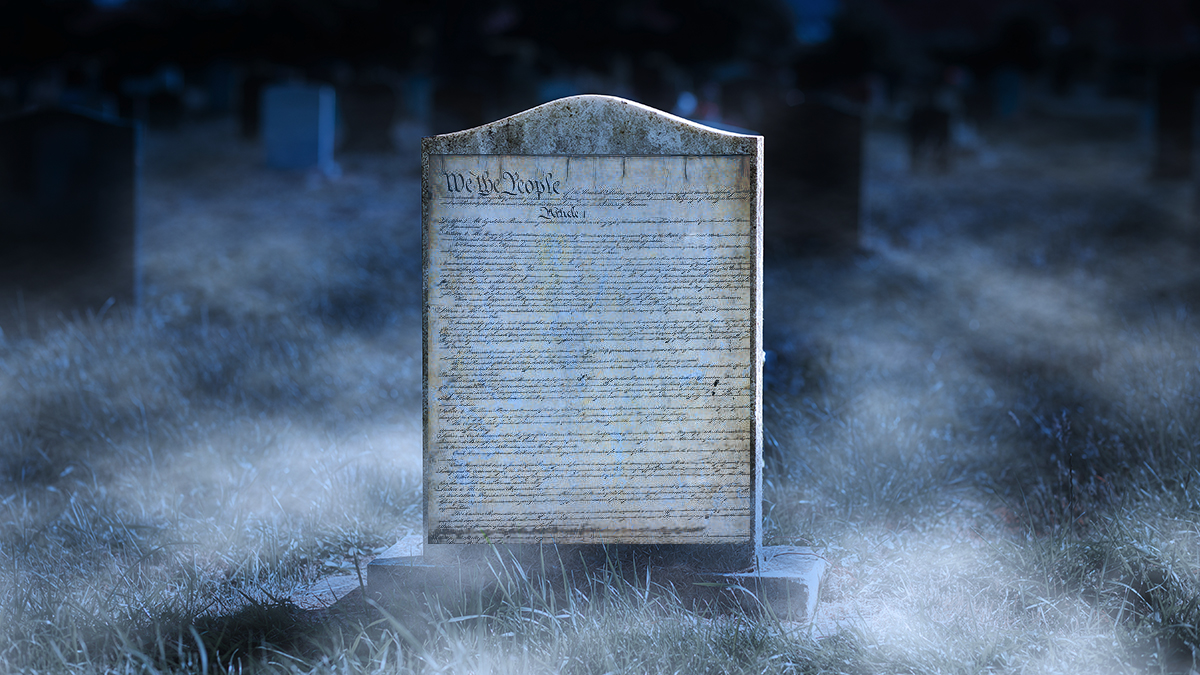 On the Need to Lift Constitutional Limitations

But limited governments allow too much freedom for the People governed, so oligarchic authoritarians insist that the Constitution must go. And when the Constitution is no longer the shaping and controlling force in the United States, that’s when law dies.

The Founding of the United States

I have written at some length about the founding of the United States before, in a post called “What Does Our Constitution Constitute?” And probably a few other posts you can find by searching “founding” or “founders” on this website. So I’m not going to rehash all that here.

Suffice it to say that, as the Cato Institute put it, the founders knew what they were doing; they didn’t pull the truths about our unalienable rights out of their asses.

Well, that’s not exactly how Cato put it. They’re not as coarse as I can sometimes be when I get riled up about the abolition of freedom. They said,

The American Founders did not pluck those truths out of thin air, nor did they simply invent the principles of American government. They drew on their knowledge of thousands of years of human history, during which many peoples struggled for liberty and limited government.

A History of Tyranny

Thousands of years of human history provided the foundational law — and the concept of the rule of law — the founders used to found, and ground, the United States of America.

The rule of law mattered because the founders knew tyranny was the cancer that will not die. Hell, some of them saw the infection in themselves! At least, Abigail Adams did.

I long to hear that you have declared an independancy—and by the way in the new Code of Laws which I suppose it will be necessary for you to make I desire you would Remember the Ladies, and be more generous and favourable to them than your ancestors. Do not put such unlimited power into the hands of the Husbands. Remember all Men would be tyrants if they could. […]

That your Sex are Naturally Tyrannical is a Truth so thoroughly established as to admit of no dispute….

So, the creators of the United States understood groups of people, “as well as individuals are susceptible of the spirit of tyranny.” Palmer, supra. They knew tyranny rules when law dies.

For most of the world’s history, most people have been ruled by tyrants. Tyrants do not care about anyone but themselves. In the mind of a tyrant, other people exist for one purpose: to improve the life of the tyrant. This includes their psychological well-being, which depends on people living and making choices for their lives the way tyrants think they should.

So the founders built the nation with a limited government, giving just enough enumerated powers to do what needed doing. But not enough power to support the development of tyranny. By enumerating — that is, specifically spelling out — which powers government had, law lives, and tyranny dies.

The Rule of Law

In a limited government, the government is not all-powerful. The law limits the power of government officials. Makes sense, right? It’s individuals — or groups of them — who make the orders, lawful, or unlawful.

By spelling out what kind of power — and how much power — these individuals and groups have, we make the laws supreme. Not the individuals or groups.

This is the principle of “the rule of law.” And the United States, we like to say is “a nation of laws, and not of men.”

Of course, in these enlightened days, we would say that we’re a nation of laws, and not of whoever happens to be in charge at the time. Sexism was in vogue at the founding, but we’ve grown up a little.

Unsurprisingly, the people in charge do not like laws that limit their power. After all, as is clear from the language I’ve been using, laws that limit power limit what those in power can do to people. If someone wants an abortion, and the people in power hate abortions, then a constitutional limit on their ability to ban abortions pisses them off. Or, if certain individuals, or groups, do not want to have their powers limited by laws, they’re going to set themselves up as being above the law.

Sure, it’s unconstitutional. But, that is the new way of the United States.

But, when law dies, all bets are off. Arbitrary power reigns supreme.

The Rule of Oligarchs

What provoked this post was a combination of stories I read this morning, but particularly one about so-called “constitutional sheriffs.” There’s really pretty much nothing constitutional about them. They’re oligarchs.

I tipped off Scott Greenfield of Simple Justice to the story. And because Scott is a faster writer than I am, and because this morning, just as I was finishing this post, WordPress decided it did not like what I was writing, and deleted half the post, that gives me an excuse to quote from, and react to, Scott. (It’s been a while!)

I should have seen it coming. In retrospect, it’s obvious. If elected progressive district attorneys can simply choose which duly enacted laws they prefer to prosecute and which they can ignore because, legislative action notwithstanding, they fail to conform to their ideological vision of their jurisdiction, why not a sheriff?

A republic, if you can keep it.

[T]he first man put at the helm will be a good one, nobody knows what sort may come afterward.

But even Franklin erred.

The death of the rule of law began with its birth. And it was still-born for those who the founders did not count as people.

Pardon Me, the Rule of White Male Oligarchs

It is a myth that enslaved blacks were counted as only three-fifths of a person. They were not counted as people at all, but as property.

Shamefully, from the birth of our nation until the Civil War, enslaved blacks had no freedom from the tyranny of those who “owned” them. Nor, when it came to tyranny, did “free” blacks fair much better. Except for a brief period, and even then only for some —and not all — freed blacks, blacks generally had little such freedom after the War.

The actual words of the Constitution that matter here reference slaves indirectly as “three fifths of all other Persons.” These words are in a section that specified how to count the population to determine representation in Congress, and taxes. Only three-fifths of the enslaved population mattered for that purpose. Perhaps you might think it nitpicking to say enslaved blacks did not count as three-fifths of a person. But it matters because, when it came to enjoying the freedom from tyranny that limited government provided whites, enslaved blacks did not count even as three-fifths of a person.

Nor did the Constitution count Native Americans.

Even today, most of our oligarchs are white men.

The Complicity of the Courts

Also writing at Simple Justice, David Meyer Lindenberg talks about Qualified Immunity, noting that it is a doctrine “dreamed up by judges” with “no foundation in the common law.” But that’s to be expected when law dies.

In fact, the Supreme Court used the doctrine of Qualified Immunity to erase the laws Congress passed to try to control the tyranny of uniformed oligarchs. As David notes,

[Qualified Immunity is] the well-known judicial doctrine that protects state employees from being sued under a federal statute, 42 USC § 1983, when they violate someone’s rights.

Since its invention by our Constitution-hating oligarchic Supreme Court in 1982, Qualified Immunity has virtually destroyed section 1983, passed by Congress.

And, when law dies, we enter not just tyranny, but the tyranny of the absurd.

As David notes, based on qualified immunity, judges have thrown out almost three-fifths of § 1983 excessive-force cases.

Perhaps there is something mystical about this three-fifths number.

The Death of Limited Government

I’m kidding. It’s nothing so mysterious as that. Judges and “Justices” are guardians of the Constitution and the rule of law.

But they’ve given up on that project.

The Supreme Court initialized this revival of oligarchy — and the death of limited government — in 1942, in Wickard v. Filburn. There, the Supreme Court did away with virtually all constitutional restrictions on the power of their inferior oligarchs in Congress.

Mr. Filburn had the audacity to grow wheat — himself! — instead of buying it, to feed his own animals, on his own farm.

You’d think he was a farmer, or something.

Through the magical sophistry which I will call “sleight of law,” the Supreme Court held,

[E]ven if appellee’s activity be local and though it may not be regarded as commerce, it may still, whatever its nature, be reached by Congress if it exerts a substantial economic effect on interstate commerce….

And, hey, since Filburn did not have to buy the wheat on the interstate markets, it exerted “a substantial economic effect on interstate commerce.”

Of course, if you look at it this way, there’s probably not a thing you do that doesn’t exert “a substantial economic effect on interstate commerce.”

Thus does law die: at the hands of judges, and “justices.” Those sworn to interpret, enforce, and protect it.

The Constitution limits government? It protects unalienable rights? It requires due process and the rule of law? The Constitution doesn’t let cops beat and kill people with impunity?

Then fuck the Constitution. Judges and “justices” will just refuse to clearly establish which rights police may not violate with impunity. They’re uniformed oligarchs! They can violate all rights of all persons (except the Supreme Oligarchs) with impunity!

Oligarchs don’t want abortions in their state? But the Constitution says women are free to choose?

Diluting the Power of Oligarchs

But, maybe, just maybe, there’s a way to fix this. FDR thought he had a plan. There’s been talk of revisiting it. After all, the Texas move may have primed the hoi polloi.

It might be worth doing. Throw in another few oligarchs. Create the conditions for a perpetual power struggle. With enough “justices,” no one ego will be strong enough to rule them all.

Maybe then we can return to the rule of law.

We could go with 13 in homage to the original colonies. Or, better yet, let’s make them more like the Senate, and require one justice from each state of the people’s union.