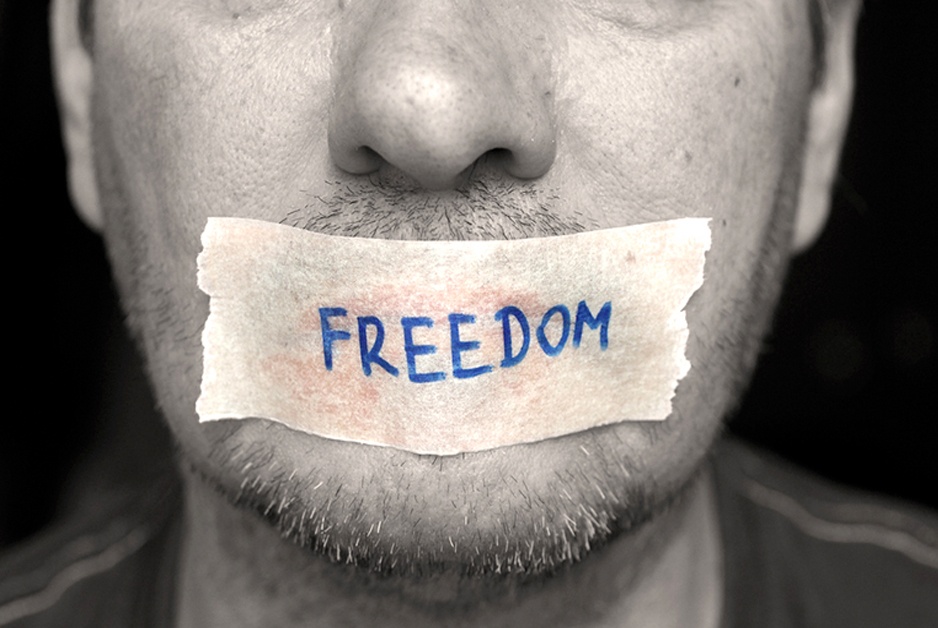 For many years now, it has seemed—at least to myself, and many of the people I have talked to about it—as if freedom of speech is the Final Frontier. Unlike the Fourth Amendment, Amendment One has been the one amendment that has remained beyond the stranglehold the government, with courts aiding and abetting the diminution of the former, but continuing to support the latter.

It may be that this was an illusion, and that all along there was a building current ready to sweep away this remaining bastion of constitutionally-shielded privileges. [1]You can’t really call them “rights” anymore. Rights are something you have by virtue of simply being; privileges are granted to you, begrudingly, or not, by temporarily complacent rulers. Perhaps out of benignity, or perhaps because their plan to benight the public’s perception of fragmentary freedom has yet to reach fruition.

In any event, all that may be about to change. Freedom of speech is about to be parceled out, with the lion’s share going only to those deemed deserving of the privilege.

In Burnet County, Texas, the San Antonio Police Department posted about the arrest of 31-year-old Otis Tyrone McKane, accused of the cold-blooded murder of Detective Benjamin Marconi as he sat in his car writing a traffic ticket for someone else—not McKane—during a traffic stop. McKane pulled up behind Marconi’s car, walked up to the passenger side, and shot him twice in the head because he was angry at not being allowed to see his son.

“I lashed out at someone who didn’t deserve it,” McKane said. ” I’ve been through several custody battles and I was upset at the situation I was in.”

McKane wants to say a couple of words, to apologize to Marconi’s family.

But that’s the difference between actions, and words. Actions have real immediate effect—sticks, stones, bullets—and Marconi is dead. One suspects no amount of words from the man who apparently admits to murdering him is going to make the family feel better.

Burnet County Judge James Oakley, on the other hand, gets to apologize. The judge posted improvident words in response to the San Antonio Police announcement.

Oakley shared the Police Department’s Facebook post about McKane’s arrest. In the comments, he wrote: “Time for a tree and a rope…”

But the San Antonio police were apparently unmoved by these words, having already uneventfully stopped a car in which McKane was riding with a woman and a small child, and having merely arrested McKane without anyone being lynched, or even shot.

Judge Oakley was not arrested, despite the obvious import of his words. Aside from the fact they were mere words, they are words that might find broad support in an area where the police strive to make America great again. Maybe.

To be fair, notwithstanding the hat incident, San Antonio appears intent on making sure it takes seriously the job of protecting and serving, rather than just controlling. Officers there have been disciplined for such acts as trying to serve a shit sandwich to a homeless man. And while their statistics on use of force appear to show that such use is increasing, this is because of a move towards greater transparency. In 2014, use of force reports increased to 1,189, from 573 in 2013. And while this might initially seem to contradict my point about San Antonio’s chief, there’s a reason for this dramatic increase that belies the idea of a police force having flipped out:

“We take a hard look at our use of force and injuries that we cause, and at that time, ‘takedowns’ were not counted as part of use of force,” SAPD Chief Anthony Treviño told the Current. “But we realized that as a result of officers taking people down, that it was causing injuries. So we thought it was important as an organization to capture that information.”

And so cop-killer McKane lives to experience due process. Hopefully not in Judge Oakley’s courtroom.

Meanwhile, in Dallas—on the other side of Burnet County from San Antonio, the unfortunately-named Babak Taherzadeh sits in jail for posting improvident words. I say “unfortunately-named” because his name isn’t something white, or judge-sounding, like “Oakley.” In its place, he has a rather common Iranian name, and one cannot help but wonder if that doesn’t have some impact on what has happened with him. I think it’s more likely Taherzadeh is being treated differently than Judge Oakley because one has the word “Judge” in front of his name. But the fact is that race has an impact on how one’s words are perceived.

The sender has a message he or she intends to transmit, and s/he puts it in words, which, to her/him, best reflect what s/he is thinking. But many things can intervene to prevent the intended message from being received accurately.

At any rate, unlike the judge, whose words said that it was time to lynch someone, Taherzadeh had a personal dislike for the judge, and posted a comment suggesting people pray for the death of the man he didn’t like. Skill with words is one of those things that can intervene to prevent an intended message from being received correctly, as is anger.

In a second bit of misfortune, the man Taherzadeh disliked turns out to be a judge. Possibly a rather fragile one, at that.

“Since all this began, Birmingham has become exceedingly paranoid and has changed his daily habits,” the warrant says. “Given the escalating nature of his bizarre fixation on [Judge] Birmingham and his family, his abusive and sexually violent language, his threats, and his delusional ideations, Birmingham is in fear for the life of his family and for his own.”

As examples of the “abusive and sexually violent language,” the story tells us that Taherzadeh asked Twitter followers if they wanted to see him “bitch slap” the judge, adding that he was not someone to be trifled with, that he asked people to pray for the judge to die—like that’s going to work—and that he complained to Radley Balko about the judge threatening to lock him up for using social media. [2]No doubt, it was that last item that caused the greatest alarm.

One can understand why a judge might become paranoid over such nasty “sexually violent language” [3]In the absence of any other examples, I’m guessing that the use of the word “bitch” made this “sexually violent.” as “should I bitch slap him?” After all, one judge is not an entire class of people such that you can suggest it’s just a manner of speaking, the way you can with blacks who complain about posts promoting lynching.

But this points to an interesting problem with actions, and speech, interpretation, race, and everything else that rightfully goes into the mix here.

Like it or not, election or no election, wall or no wall—lists, camps, deportation, or none of these—we live in a multicultural, land of the somewhat free, home of the kind-of brave (but not to your face). Sometimes, the things people say they are going to do are clues to future behavior. Sometimes, they aren’t. And sometimes—our current PEOTUS comes to mind—we might find things increasingly confusing, and decide we have to adopt a wait-and-see approach.

The problem here is that unlike with actions, where you can point to an instance with a real-world consequence, we can’t always know which of the above-three situations is controlling just going off the words.

Sure, bitch-slapping a white judge sounds a lot more violent than, having captured a black man, suggesting we dig out the noose and look for a good tree. It’s a matter of perspective, no?

In reality, though, it’s all words. And while I see nothing wrong with castigating someone for their words—especially a white judge making statements about blacks, nooses, and trees—words are not actions. They’re not even extremely good indicators of actions—past, present, or future.

This is why freedom of speech, even for ignorant, angry, stupid speech, is so important.

In Fresno, California, where my law office is located, it’s not uncommon to see people arrested for an argument, and because in the heat of it they said, “imma kill you!” they end up charged with a felony for “criminal threats.” The fact of the matter is that 999 times out of a thousand, these are just words. And nothing more. Nobody gets killed. Indeed, the “victim” survives long enough to call the police, and (not infrequently) continue arguing with the potential murderer until they arrive.

And now we have a new President. A man known to have extremely thin skin, and a strong dislike for a free press, and protesters.

I can’t wait to see how long it takes our final privilege in the Bill of Privileges to go the way of the rest of the Constitution.